The Boston Celtics face an offseason of uncertainty after their first-round loss to the Knicks. Is this the year they finally "blow it up?" The dominos will only start to fall once Kevin Garnett decides if he wants to keep playing.

Doc Rivers didn’t talk to him about it. Neither did Danny Ainge. This is the understanding that all parties involved have with KG. Leave the man alone and let him decide his future on his own terms.

If Garnett decides to retire, the wheels of change will slowly be set in motion. If he decides to return, the Celtics will likely make do with what they have and tinker at the margins. That’s the simple version. This will not be simple.

Garnett has two seasons left on his contract. Next year is guaranteed at about $12.4 million. The final year is worth $12 million but contains a $6 million buyout. The Celtics are on the hook for all of it at the moment.

They cannot use the amnesty clause on him. The provision was put in place for players signed to contracts before the latest collective bargaining agreement was enacted, and Garnett signed his new deal under the terms of the new CBA.

KG also has a no-trade clause. During the trade deadline, the Celtics never approached Garnett about waiving the no-trade. They weren’t going to do that unless they had a firm offer on the table, and according to sources, it never got that far. (See the understanding.) 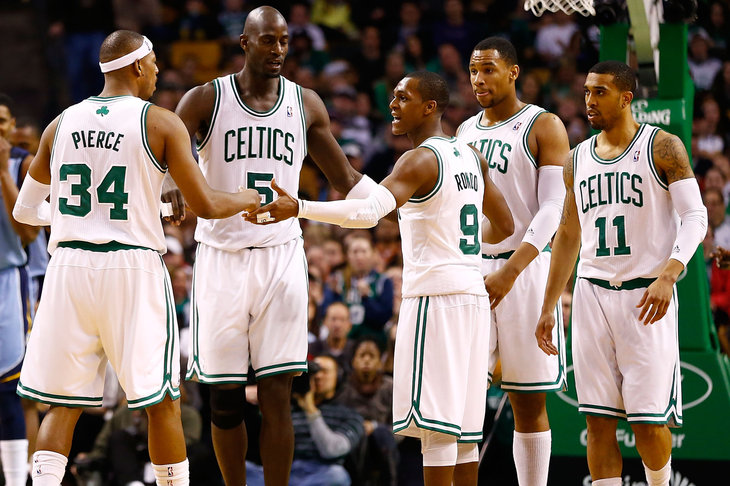 Celtics Blog argues that now isn't the time to blow things up.

Now, the retirement question. Players with guaranteed money rarely retire, and indeed NBA players almost never formally "retire." At some point, they just stop being offered contracts and that’s that.

One of the last players to actually retire was former Kings/Grizzlies/Heat/Magic guard Jason Williams, who filed for retirement, then changed his mind. One problem: the NBA prohibits players from returning to the NBA for one year after placing themselves on what’s known as the Voluntary Retired List. (See Larry Coon for more details).

If Garnett decides to spend the rest of his days doing down dogs in the Malibu surf, he and the Celtics can try to reach a buyout agreement, which would then lead to waivers. This happened with Rasheed Wallace, who walked away from the last two years of his deal and reached an agreement for a smaller amount. Of course, Sheed never technically retired and he returned this past season with the Knicks before saying he was going to retire again.

Rest assured that if the Celtics go down this path with Garnett, every team in the league will try to convince him to sign with them the second he clears waivers. A team that was under the cap could also claim him outright and assume the balance of the contract.

It is absolutely in the Celtics best interest to have Garnett return or work out an acceptable trade.

The bottom line is the Celtics would get nothing but a roster spot and an uncertain amount of cap relief if Garnett decides he’s had enough. Keep in mind that Garnett is still one of the handful of impact big men in the game, and even at his advanced age and declining minutes, he’s worth every cent. It is absolutely in the Celtics best interest to have Garnett return or work out an acceptable trade.

Now, we need to talk about Paul Pierce. Garnett made it clear on Friday night after the Celtics were eliminated that he wants Pierce by his side. That’s not his decision to make.

The Celtics can buy out the final year of Pierce’s contract worth $15 million for $5 million by June 30. That $5 million figure would count against the cap. They could use the amnesty clause on him, which would clear some more cap money, but they would then owe him the full $15 million in real dollars and any team could sign him or claim him on waivers.

Like Garnett, the Celtics best play here is to either have Pierce in uniform on opening day or work out a trade. All of this is a guessing game at this point, but here are a few scenarios for the Celtics this summer.

Let’s say Garnett returns and Pierce is still on the roster after July 1. The Celtics would have over $73 million committed to 11 players, with Chris Wilcox the only free agent. Terrence Williams, D.J. White and Shavlik Randolph all have non-guaranteed deals and they have a first-round pick to add to the mix.

If Ainge did literally nothing, the Celtics would hope for healthy comebacks from Rajon Rondo and Jared Sullinger and further development from Avery Bradley and Jeff Green. They would likely be over the luxury tax threshold and would only have the taxpayer mid-level exception to use to sign free agents. In essence, they would run it back one more time.

Assuming health -- an awfully big assumption -- that team is at least competitive, but it has also shown that it’s not good enough and it’s very expensive. Rivers talked about needing more help if they were to make another legitimate run, but if KG and Pierce both return, there are limited avenues for Ainge to improve the team.

He could try to work trades involving some of his role players, like Jason Terry and Courtney Lee, or maybe some of the younger talents like Bradley and Sullinger. This simply delays the inevitable for another year and gives the old guys one more chance to pull off yet another miraculous run. Honestly, there are worse ideas.

It’s plainly difficult to see a scenario where Garnett or Pierce is on the team and the other is not. It’s not impossible, but it doesn’t seem to make much sense.

Let’s say for the sake of argument that KG retires and agrees to not take another dime. Let’s also say that Pierce gets bought out. That’s far too simplistic, but work with me here. The C’s would then have about $50 million committed to nine players, including Pierce’s buyout number. It gets technical from here, but they could possibly slide in just under the cap and gain some room to maneuver in trades.

There’s value in having cap space even if there’s not enough to sign prime free agents. There’s also value in getting under the luxury tax so they wouldn’t be subject to the harsher repeater penalties down the line.

The best way for the Celtics to improve themselves is for Ainge to trade both Garnett and Pierce, but again, that’s far easier said than done. Draft picks are the key currency, and it’s worth noting the 2014 draft figures to be a lot stronger than this year’s draft. Teams are loathe to part with first-rounders under the new CBA. 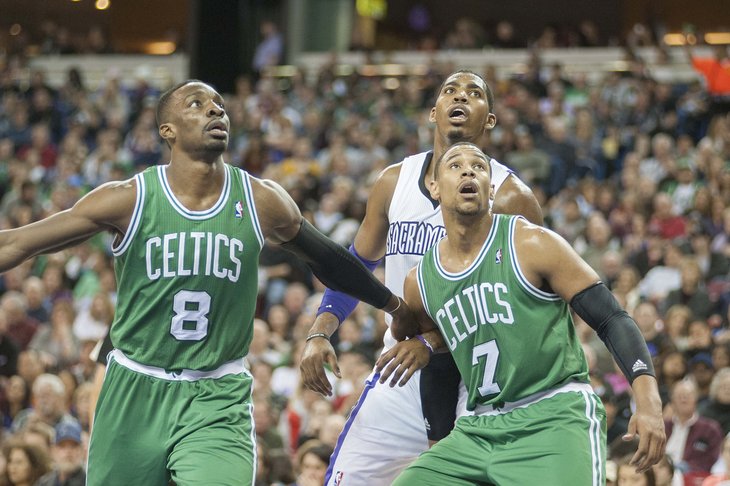 Rajon Rondo is not alone.

Simply dropping them for nothing would be the start of a long rebuilding process, but doesn’t really help the cause.

Let's divide the roster into three categories: the core guys, the veteran role players and the next generation.

All three have value, but is it enough value? That’s what Ainge and his front office have tried to assess over the last three years. We know he tried to trade Rondo for Chris Paul. We also know the Nets tried their standard package of Marshon Brooks, Kris Humphries and a pick to get Pierce.

Of the three, Pierce is the most likely to be dealt. He wants to keep playing, and while his postseason was a major disappointment, he still posted solid numbers across the board during the regular season. Pierce can still play and would be a great addition for a team that feels like it’s one player away, like the Clippers.

Garnett has the most trade value. Even at 25-30 minutes a night, he’s still a game-changer defensively and a steady offensive player. He also brings the entire KG package and it’s impossible to put a price tag on his professionalism and preparation. His no-trade clause is obviously a major deterrent.

The feeling here is that Rondo stays regardless of the team’s direction, with the caveat that Ainge would trade anybody given the right deal.

All three are signed for around the mid-level exception and all three have multiple years left on their deals. All three also had disappointing seasons, although Terry and Bass redeemed themselves somewhat during the playoffs.

For whatever reason, Lee didn't make a smooth transition in his first season with the Celtics. He's much younger than Terry and there was tremendous interest in him last summer. He's the logical trade candidate here.

Individually, none of their young players has enough value to bring back a substantial cornerstone talent, but they could be part of an interesting package deal with one of the veterans.

Green’s big contract doesn’t look so bad after a strong second half to his first season back from heart surgery. He’s still not a good rebounder or playmaker for his position, but he can score and he became a much more confident player. It would be a surprise if he’s traded this offseason.

Bradley has one more year left on his rookie deal and he can be a restricted free agent after next season. This is a tough call for Ainge because despite his potential, Bradley has a history of injuries and no real defined position. He struggled mightily in the playoffs without Rondo, but has shown spectacular flashes, like late in Game 6 when he almost single-handedly stole the game from the Knicks.

Sullinger also has an injury history, but he did prove in half a season that he can be productive. Melo made strides in the D-League but his trade value is still limited. He’s more valuable to the Celtics as a backup big man if he can improve enough to get on the floor next season.

We always knew the day of reckoning was coming, but the end game is still a mystery.

Again, all of this ultimately comes down to Garnett. Until the Celtics have a clear idea of what KG wants to do, everything is in limbo. In the interim we can expect all kinds of wild rumors and speculation. We always knew the day of reckoning was coming, but the end game is still a mystery.