In defense of Ian Stewart

Ian Stewart tweeted some things he shouldn't have twoten, and he was wrong to do it. But here's a reminder to put yourself in his position for a second ...

Share All sharing options for: In defense of Ian Stewart

There are 255 starting jobs in the majors for hitters. There are 150,000 players who want those jobs, and there are probably 1,000 who sincerely believe they are one of the 255 most-qualified players on the planet. The same ratio probably holds for bench jobs and bullpen jobs, spots in Triple-A and Double-A, et cetera. Wherever there is professional baseball, there is a person who sincerely believes he isn't being evaluated properly.

Which is to say, it's absolutely amazing that there aren't more Ian Stewarts in the world. In case you missed it, Ian Stewart isn't very good at Twitter. He's in Triple-A, and and he doesn't think he should be there. Paul Sullivan has the full story:

Stewart’s late-night Twitter rant began when a fan tweeted him and asked if there was "any word when you’re heading back to Chicago." Stewart replied: "Probably never."

Say, that doesn't seem too …

Stewart later tweeted that it was "more fun" in Triple-A than the big leagues because there is "no stress" and "no media," adding it was "way chill."As the night wore on Stewart retweeted someone who took an apparent shot at the Cubs’ front office: "sad part is Stew isn't an AAA baller. He is a big show baller in an org. With terrible leadership."

"It doesn't exactly help the organization get better to spend the morning dealing with it," (Cubs GM Jed) Hoyer said on WSCR 670-AM. "It's a sensitive subject. I won't really expand on but I can tell you it was really unprofessional and there's going to be consequences."

But as you might have gathered from the headline, this is going to be a defense of Ian Stewart. And it's a two-pronged defense, both of which you might have heard before, but neither of which is brought up enough.

First: I don't know Ian Stewart, nor have I followed him since he was a high-school kid. But I have a pretty good idea of how his life has been to this point:

And I don't think we can really appreciate what "great" means. I've never been as good at anything as Stewart is at baseball; the odds are at least decent that you haven't, either. It was the kind of "great" that defined him, informed his every decision. It was the opening sentence on his personal résumé, the first thing people mentioned when his name came up. Ian Stewart? Great baseball player. Ian Stewart? Helluva baseball player.

Then he was bad at baseball at the highest level when everyone was watching.

I can't fathom what kind of mental jolt that gives a person. I don't care if your special skill is singing "Bohemian Rhapsody" in the shower or juggling six oranges, the second you can't do it anymore, it messes you up. In this case, it's a kid in his mid-20s who has this happen to him. This isn't Clint Eastwood having trouble scouting when he's 80, this is a spore of a human having to deal with failure for the first time at the endeavor that's defined him for his entire life.

When that happens, there will be frustration. And with Twitter and Facebook and the Internet machines, those frustrations can be shared. Again, I'm dumbfounded that it doesn't happen all the time.

That's the first part. The second part gets less press in my estimation, though it's just as important.

On the other side of this pressure is another force that's hard for us to understand, which is the fact that baseball players are usually done by their mid-30s. My career is just starting, yet I was born in the same year as Mike Caruso, Paxton Crawford, Brent Abernathy, and Tike Redman. You haven't thought about those guys in years. They're done as baseball players, and they have been for years. With guys like Stewart, every roster not made is a missed opportunity. Every year spent in Triple-A is a year that they aren't going to be enjoying their short prime as a baseball player.

I'm almost exactly midway between Manny Machado and Roger Sterling, but I have decades left. I'll write until the Internet gets tired of my stupid jokes. So until 2011, at least. It's incomprehensible to think of my career suddenly going into the toilet right now simply because I've had the audacity to keep having birthdays.

If Stewart doesn't succeed with the Cubs in the majors, he'll languish in the minors. And if he has a fluky-bad BABIP season in the minors or if he tries to play through a little wrist injury that hampers his production or if he has an 0-for-5 night in front of the scout sent to check on him … all of those things can contribute to a player waking up with a sore back on his 35th birthday, wondering if it's time to join civilian life.

In addition to struggling like mad in Triple-A after struggling like mad in the majors, Stewart is getting older. He's 27 now. His #1 comparable on Baseball-Reference.com, Shane Andrews, was effectively finished by 28. Even if Stewart doesn't know who the heck Andrews is, he knows the story of Andrews by osmosis. That wall is closing in on him.

Or, to put it in a language that you nerds can understand: 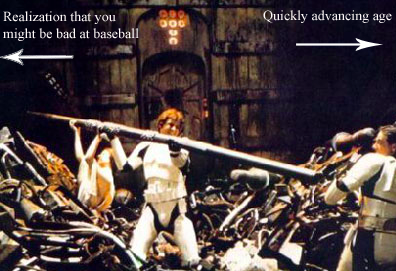 This isn't to say Stewart should take his grievances to Twitter. This isn't to say Stewart isn't guilty of being exceptionally bad at social media. If this were an office job, this would be the equivalent of grabbing his crotch and waggling at the regional supervisor when he or she was in the middle of a site audit. It was a stupid, horrible, unfortunate decision. Everyone knows you shouldn't do that.

But when it comes to people saying that he should shut up, put his head down, and start hitting before he mouths off ... I don't think any of us can really understand what it's like to be Ian Stewart right now. It's a cocktail of frustration, and most of us will never have to deal with any of the separate ingredients. No one should feel bad for the baseball players who have made several million dollars before they realize that something's wrong.

But we can feel a little sympathetic for them, at least. Where Ian Stewart has gone, I have most certainly never been. So I can't judge what he's saying now that he's there.