Picking the Home Run Derby team for the National League

You don't really care about the Home Run Derby, but I used an Archer GIF, so at least stick around until you get to that part.

Share All sharing options for: Picking the Home Run Derby team for the National League

Aw, dammit, you're still here. Okay, but I'm going to make a go of it. It's important because Wright and Cano each get to pick three Derby teammates, and because some of us are weak and unable to ignore the Home Run Derby, it's kind of important. In the least possible way. So if you're a weak, weak person like me, what would be the optimal Home Run Derby lineup be?

Here's a look at my favored contestants in the National League.

Stanton is still recovering from knee surgery. He's off to a slow start. He is almost certainly not going to participate in the Home Run Derby.

This is a travesty. The MLBPA and MLB should agree on something binding regarding Stanton and the Derby. Like this: 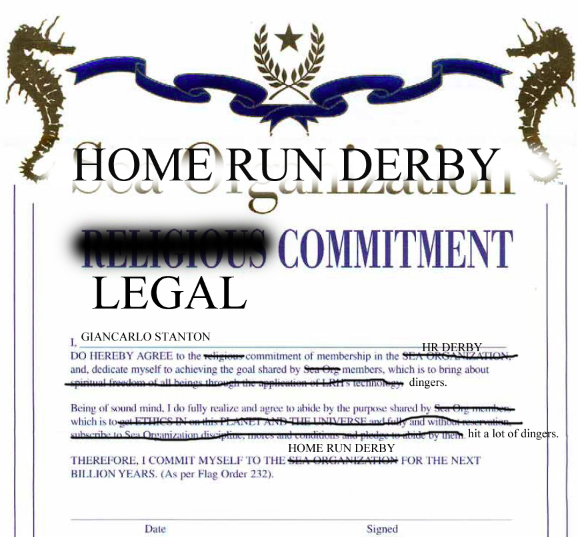 That's just a suggestion, but the length of the contract is suitable. And if you're the Marlins, don't you want Stanton dingering things up for public-relations purposes? As in, look, not everything in our organization is a steaming mess! If there were some sort of Fastball Derby, they could do the same thing with Jose Fernandez, but there isn't. The chances are good that Fernandez pitches an inning, if that. If he even makes it. Bruce Bochy could take Chad Qualls or someone weird. Why not circumvent all those possibilities and order Stanton to participate? Or pay him. Something.

Also, I want to watch Giancarlo Stanton in the Home Run Derby.

Hunter Pence is a batting-practice legend. If you're an Astros, Phillies, or Giants fan, you probably know this. But we're not just making that up. From Philly.com:

The targets for Hunter Pence at AT&T Park are plentiful. There is the giant Coca-Cola bottle in left field and a body of water beyond the rightfield wall. His batting-practice shows have traveled from Houston to Philadelphia and now here, where Pence swung with all his might Tuesday afternoon.

And the USA Today:

Buster Posey makes it a point to take batting practice ahead of Hunter Pence, so he doesn't have to try to keep up with all the home runs Pence hits.

Here's an entire video devoted to his batting-practice exploits in spring training. Here's a short tale from Pence's time as an Astro. Here's a GIF I made of ALF: The Animated Series that I made for an article about Hunter Pence, but I couldn't quite fit in.

Pence is a BP legend, and he's never been invited. If you're really pretending to be Captain America, David Wright, your duty is clear …

Those two are my gimmes. But for the last slot, we have to get creative. The options, as I see them:

Gattis is the human-interest story. He was literally living in a cave two years ago, literally eating mastodon meat that he got by literally killing mastodons with his bare hands. Also, he was into "gurus." Which is exceptionally odd. But it's worth spotlighting him on a national stage just to spread the story.

Also, he's kind of a brute.

That's a good Home Run Derby kind of swing. One of the best imaginable. But is Evan Gattis really this good? We're just a couple months into his career.

Domonic Brown makes the short list because he's leading the league in home runs. He's just a homer away from his career best at any level. That's kind of the problem, though. No one thought about Brown as a force of nature before the season, and a fast start doesn't exactly compel me to watch him take batting practice like some of the other players on this list. Jumping on the fast starters is how you get people like Brandon Inge in a Home Run Derby.

Inge hit what likely would have been one double, two singles, four fly balls, two pop-ups and one groundout.

But he did not nail a single round-tripper.

It was fun for Brandon Inge, most certainly. It was not fun for the people who were watching. Though it's the Home Run Derby, and isn't really fun for anyone … but especially not when you're watching a sample-size hero realize that he was horribly miscast as a batting-practice legend.

That's probably not how you'd describe Paul Goldschmidt, though. He's beyond the sample-size line for being a good player, and we're all pretty comfortable with the idea that he's one of the more compelling power hitters in the game by now.

But I want to watch Gattis.

But Goldschmidt is probably better at hitting and derbying.

But I want to watch Gattis.

So we'll cut a deal. Goldschmidt is in, but only if Tim Lincecum pitches to him. Otherwise, my preferred NL squad:

My guess at the actual four: