Stephen Jackson, former professional basketball player and amateur melee fighter, appeared on Dan Le Batard is Highly Questionable this week. You may not have watched it. Remedy that immediately.

We will help by pointing you to crucial moments of vital public interest.

1:39 This is an actual chyron from the interview, and also a question that Stephen Jackson answers without blinking. 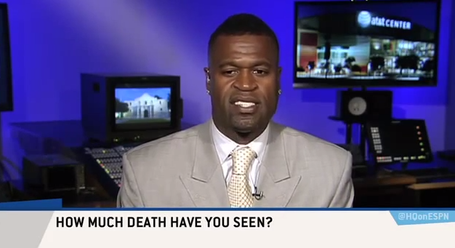 "You never know when it's your turn." That's Stephen Jackson talking about the immediacy of death, firing a gun in a strip club parking lot in self-defense after getting hit by a car, and getting surgery on his lips without anesthesia less than two minutes into a televised interview. Again: THIS IS THE BEGINNING OF THE INTERVIEW.

3:40 It's been published elsewhere, but any talk of Ron Artest saying, "Are we gonna get in trouble?" in the locker room after the Malice in the Palace brawl is worth listening to--especially when it's easily only the fifth best thing in this interview.

4:40 Le Batard: "Admit that you enjoyed punching the customer."

Jackson: "Lemme say this. All those racial slurs I done heard, all those things about my mom, my basketball game and my kids and all this...It felt good to punch a fan one time. I'm not gonna lie."

6:10 Stephen Jackson says he "didn't really get to do what he's capable of" in the Pacers/Pistons/population of Detroit brawl. Stephen Jackson fought no fewer than three people in the fight and dominated every single round. Stephen Jackson basically wants to set up the hallway scene in Oldboy, leave the hammer behind, and show the world what he's really capable of doing in a real fight. 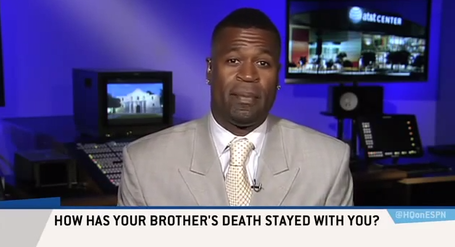 Just ten minutes into the interview, talking about how his brother was beaten to death with pipes.

11:00 This interview ends with a tale of foreign NBA players attacking each others' genitals with towels.

Just watch it. I can't explain any of it, but Stephen Jackson's Real Tales Of Real Stephen Jackson Life will be coming to you sometime soon as a form of reality television. It will be the hardest television show ever created.