Grading the suspensions for the Diamondbacks/Dodgers brawl

Who got off light? Who was punished too severely? Why is Yasiel Puig above the law? Let's all find out ...

Share All sharing options for: Grading the suspensions for the Diamondbacks/Dodgers brawl

The brawl between the Los Angeles Dodgers and Arizona Diamondbacks was one of the better baseball fights in recent memory. For the purposes of definition, by the way, "better baseball fights" is defined as a rhubarb, fracas, or melee that meets the following qualifications:

It is at this point that I would like to indicate how silly baseball fights are, how ridiculous and pointlessly macho they are and how enlightened baseball fans mostly hope they go away. After watching the video 84 times, I must agree. But, hold on, lemme watch it again. After the next several dozen times, I'll be able to tell you what's really wrong with fighting in baseball.

Alas, Major League Baseball can't even count these fights as a guilty pleasure. As such, they've handed down suspensions for the parties involved.

Let's grade the punishments, then:

Ian Kennedy - 10 games - F
Okay, it's an "A" when matched up with previous suspensions. But I can't give it an "A" because I'm a zealot and I'm for a month-long suspension for any pitcher throwing at a hitter's head -- even if it's Zack Greinke's. Did the ball get away? Mayb,e because it's hard to believe that Kennedy would actually wing it at Greinke's head so maybe he was trying for the backside and it went away from the target. It happens.

Unfortunately, there's no precedent for that kind of suspension, so a two-start penalty is about as punitive as MLB was willing to get. That's fine. Not great, but understandable, considering. So it's not really an "F," but I couldn't type an "A" in there because I'm willing to argue that Kennedy should be trebucheted into the Pacific.

You have to realize the benches emptied before Greinke was hit:

And Hinske and Gerardo Parra were the first ones out of the dugout: 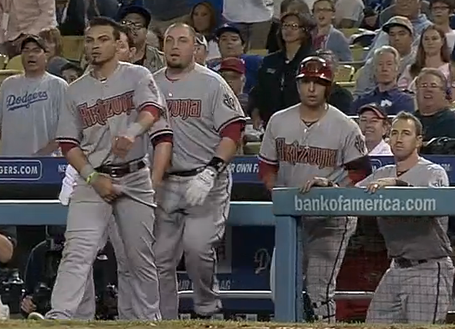 Good idea, Gerardo. You have to know what your limits are if you're at less-than-full armor.

Maybe this suspension had something to do with the previous bench-clearing incident and general rabble-rousing, but I've watched the video several times and I don't see what Hinske specifically did . MLB talked to the umpires on the field and they looked at the video -- all of the videos available to them, not just the TV cuts -- so I'll give them the benefit of the doubt and figure that Hinske did something nasty because a five-game suspension for a position player is pretty harsh.

From the video available on MLB.com, it looks like Hinske's biggest offense was getting in the way of Yasiel Puig's fist.

More on that in a bit, though.

J.P. Howell - two games - D+
It was Howell who tackled Ward and pinned him to the railing, which is one of the scariest moments I've seen in a brawl in a while. Remember how Carlos Quentin was suspended for eight games because Zack Grienke punched him with his collarbone? Howell's transgression was much more violent, and it could have been a lot uglier than a broken collarbone.

Skip Schumaker - two games - INC
I don't get it. Like Hinske, I'll assume there was something on the editing-room floor that detailed him acting completely unlike a grown man named "Skip" is supposed to.

Mark McGwire - two games - B+
McGwire acted like a complete freak, which isn't something a coach should do. Coaches and managers are supposed to break this stuff up, but McGwire was stomping around, gritting his teeth, and pushing his way into the pile when things were simmering down. He didn't throw a punch or tackle a should-be-Hall-of-Famer so it's not like he committed a grave sin out there -- He just acted like a methed-out mandrill, and he was suspended accordingly.

Ronald Belisario - one game - B+
Belisario deserved some sort of suspension for being aggressive and throwing a punch, and a game is about right. He was pretty wild, so two games wouldn't have been too severe.

Don Mattingly - one game - C-
Nah. You don't get to toss down another coach and get a one-game suspension. I don't care if the other coach is whispering Slayer lyrics in your ear, you don't get to do that. Gibson was suspended a game because them's the rules after a warning is issued, but Mattingly was acting very, very un-manager-like. He had some frustrations to get out so I don't really blame him, but if the goal is to make managers think about the potential consequences of their actions in this situation, a one-game suspension is kind of hot garbage.

Kirk Gibson - one game - N/A
The benches were warned, and then a D-backs pitcher hit a player intentionally. The rules unambiguously state that Gibson gets suspended for a game. 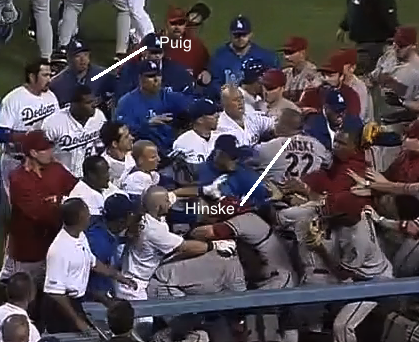 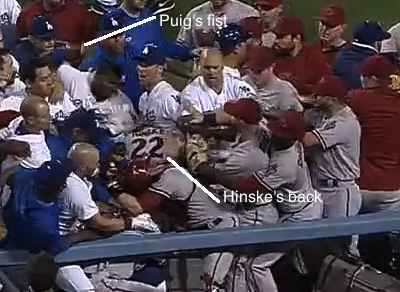 Puig surges through the pile, winds up, and intentionally chops his fist down on Hinske's back. Puig did more harm in this figh -- more to incite the violence -- than Belisario, Mattingly, McGwire, Grienke, Montero and, from what I can tell, Hinske and Schumaker. Only Kennedy and Howell were worse from what I could see.

But for Puig not to miss a single game? He threw a vicious punch. In the history of baseball brawls, has there ever been a player who didn't get at least a one-game suspension for throwing a punch? It was a grown-up, big-boy punch. How can the Diamondbacks not be angry? How can there not be claims of bias? How can there not be a suggestion of favoritism when the guy on the left here … 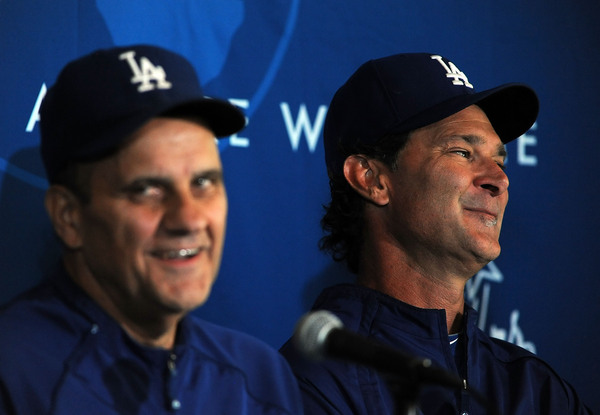 … is in charge of the suspensions? At least try to make it seem like the punishments are equitable if you're intimately involved with one of the organizations.

The moral of the story is that if you're a super-hot-topic-du-jour-extra-thrilling prospect, you can throw some punches. Take a swing, you guys! The rules don't apply to you.

If Puig were suspended for a game, like Belisario was, it would be easy to pooh-pooh the idea that Torre was biased. Just a game. No suspension at all? Ludicrous. The Diamondbacks will be outraged ... and they'll have a point.