P.K. Subban has won the Norris Trophy, voted as the NHL's best defenseman in 2013 in just his third season.

Subban finished the year with 38 points, tied with fellow nominee Kris Letang for the league lead among defensemen. He was also one of the game's best on the power play with 26 points.

But offense has always been a strength for Subban. What set him apart this season was his improved defensive abilities. His plus/minus in 2013 was plus-12. Two years ago, he was minus-8. The marked improvement came while playing against top competition in Montreal's top defensive pair. After gaining a reputation as a pest, he cut his penalty minutes down to 57 (49th in the league).

You have to imagine Kris Letang's well-publicized shortcomings in his own end cost him a shot at the award. So why did Subban beat out Ryan Suter, who some believed carried the Wild blueline this season? Perhaps the voters simply expected that sort of performance from Suter, while Subban's improvement in all areas caught them by surprise.

Here's a full look at the Norris Trophy voting: 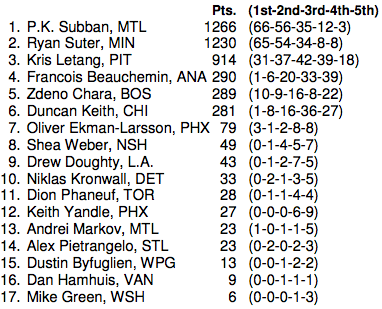