Jonathan Huberdeau of the Florida Panthers is the NHL's top rookie.

Jonathan Huberdeau of the Florida Panthers has been named the NHL's top rookie for 2013, winning the Calder Memorial Trophy over fellow finalists Brendan Gallagher of the Montreal Canadiens and Brandon Saad of the Chicago Blackhawks.

Huberdeau is the first member of the Panthers to ever be voted the winner of a major NHL award. The No. 3 overall pick in the 2011 NHL Draft, Huberdeau scored 14 goals and 17 assists while playing all 48 games in the 2013 season. Those numbers were good enough to tie him for tops in rookie scoring with Edmonton's Nail Yakupov. He routinely played a top shift throughout the season for the Panthers, and the voters clearly didn't care that the Panthers were one of the worst teams in hockey.

Here's a full look at the Calder Trophy voting: 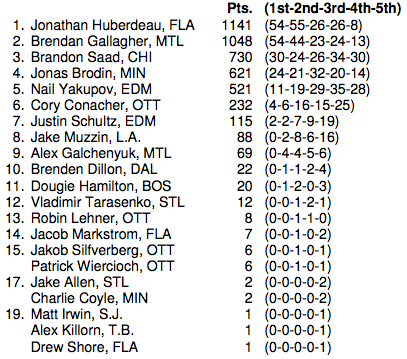