Danny Green has already shattered the record for most three-pointers in an NBA Finals series, and he still keeps getting open looks. How does this happen? We break down Miami's defensive breakdowns.

Share All sharing options for: NBA Finals 2013: How Danny Green keeps getting open

If you want to get some idea of why the Miami Heat keep leaving the torrid-shooting Danny Green open in the 2013 NBA Finals, watch this play from late in Game 5 carefully.

To the naked eye, this is merely a drive by Tony Parker that results in two free throws. But don't watch the ball. Instead, watch what Green does as Parker goes to the hoop. Here is where he starts as Parker drives. 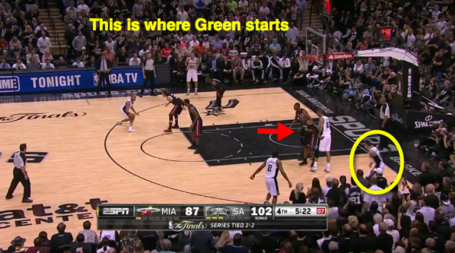 And here is where he finishes. 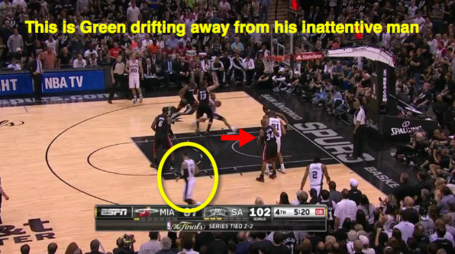 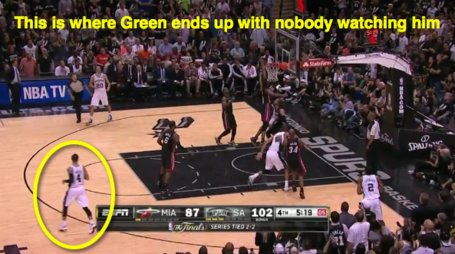 Notice how nobody is watching Green. As everyone else focuses on Parker's drive, Green has somehow slipped into an open space in case Parker wants to kick the ball out. Most shooters would just stand in the corner waiting for a kickout pass. Green, however, has drifted away from his spot as the play is happening. In this case, Parker goes up for the layup, but there have been so many times this series where he has kicked the ball out on similar plays.

(Note: Green may also be rotating to get back on defense in the event of a turnover, but it's the same effect: he's not standing still.)

This is why the Heat keep yielding open shots to Green. Miami's defensive scheme calls for everyone to react to the ball, which often leaves them vulnerable to players moving without it. The Spurs, meanwhile, are so good at sneaking shooters and cutters into open space as a play is happening.

Put those two forces together, and it makes sense that Green keeps getting open. As the Heat swarm to the ball, the Spurs sneak their shooters away, creating defensive breakdowns that look abominable to the naked eye. By packing so much movement into every possession, the Spurs are giving the Heat too much to think about. Green has been the primary beneficiary.

All series, Green has feasted on the ball-watching tendencies of Miami's wings. Here, he loses LeBron James cutting from the right corner to the left corner as Parker and Tiago Splitter play catch.

Green does the same thing to Dwyane Wade later in Game 2, this time receiving a kickout pass off Parker's dribble penetration.

This terrible transition breakdown by Mario Chalmers in Game 5 was made possible because Green timed his cut along the baseline perfectly with Manu Ginobili's transition pick-and-roll.

Those are three bad plays by the Heat, of course, but they happen because Green cut. Most shooters would just stay put at this point in the play. 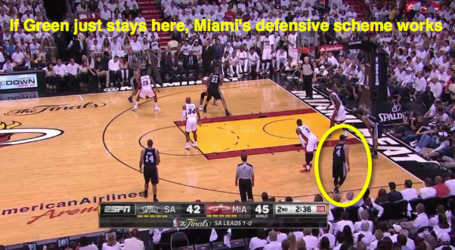 Miami's defense, like so many others, calls for everyone to see the ball properly. They know that you can't stop great players like Tony Parker with one man, so they make sure to show him a quasi-zone look when he has the ball to prevent driving lanes. But by cutting while the main play is happening, Green is catching Miami's defense when it's most vulnerable to ball-watching. The help responsibilities of James and Wade have pulled them away from helping on Green here. 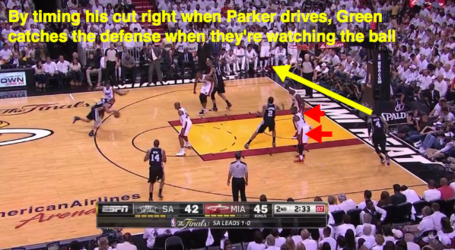 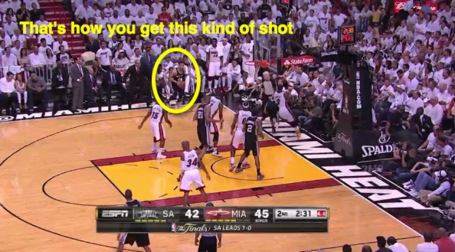 Granted, some of Miami's ball-watching breakdowns on Green have been bad. The one by Chalmers is inexcusable. So, too, are the times when Miami has overhelped on ball-handlers, leaving Green alone. Like this time by Ray Allen. 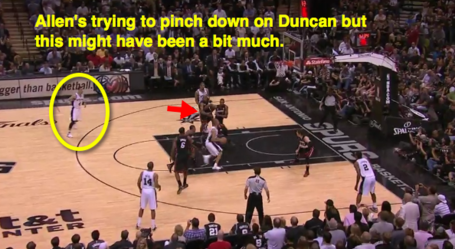 Or this time by Udonis Haslem. 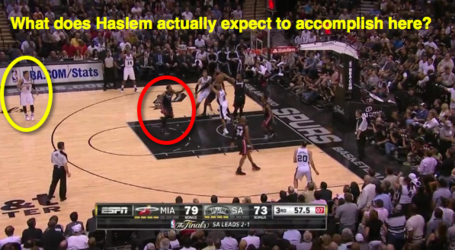 Or this time by Mike Miller. 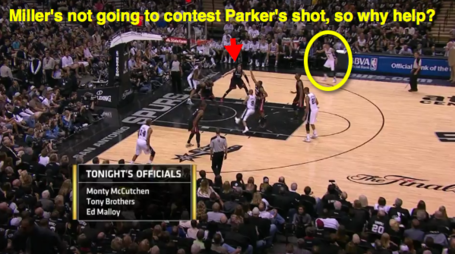 But all of that is happening because of two devastating Spurs realities coming into play: the brilliance of their stars and the intuitiveness of their role players to find open space. The Heat are finding out that it's almost impossible to shut down both the stars and the role players.

And the stars are making unselfish plays. Notice how much attention Parker draws here after he beats his man in a pick-and-roll. 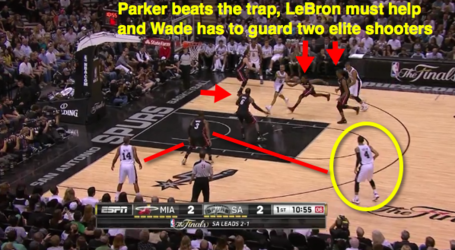 That sets up an open three for Green early in Game 4.

Notice, too, how Tim Duncan, struggling offensively in this series, has made a subtle play to help Green get open. This roll to the rim by Timmeh occupies Miller, freeing Green for a dagger 3 in Game 1.

Here, Duncan sets a backscreen on Wade to free Green for a good look. 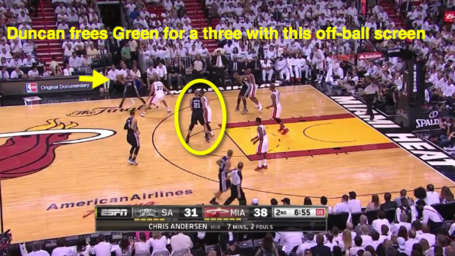 Finally, sometimes, the Spurs' ball movement is just too good, like on this sequence in Game 5.

Obviously, Green has to make the shots after all these things happen, and to his credit, he's done that. I don't mean to take away from Green himself here. But Green's success is ultimately the result of a Spurs system that:

These four factors have the Heat's defenders spinning around aimlessly. It's no accident that one of the league's best defenses has displayed grade-school breakdowns on Green and others.

• Flannery: Finally, The Manu Game | How the Spurs won

• Spurs take Game 5, now just one win from the title

• Interview: Behind the lens of Team Wade