Share All sharing options for: Solving the LeBron James and Dwyane Wade dilemma

Once the glow of one of the best games in any sport this calendar year died down, I decided to search for reasons the Miami Heat were able to rally from a 10-point deficit en route to stunning the San Antonio Spurs in a Game 6 overtime thriller to extend the series. It didn't take long to find a trend worth noticing either: LeBron James was a much better player when Dwyane Wade wasn't on the court.

The defining stretch of the fourth quarter was the 22-9 run that took San Antonio's 10-point lead in the third quarter and turned it into a three-point deficit early in the fourth quarter. LeBron had 13 points, two assists, two rebounds, one block and zero turnovers on 6-7 shooting during those eight minutes. The NBA's MVP had 19 points, eight rebounds, nine assists and six turnovers on 5-19 shooting combined in his other 42 minutes. The rebounds and assists are nice, sure, but the terrible shooting and turnovers are not.

The difference? Wade sat on the bench during that entire eight-minute stretch.

When Wade's returned with 3:48 remaining, the Heat reverted as the Spurs outscored them by eight points before the miracle ending -- capped off by a Ray Allen three -- forced overtime. Miami ultimately won the extra session with Wade in the game, but the damage was nearly done regulation.

Lest one thinks this was a one-game blip, it's actually been a trend all series.

For those that aren't interested in the numbers, that means that the Heat have been a pretty bad team this series with Wade and James in together and lights-out incredible with James in sans Wade. Obviously, there's a sample size and opposition issue at play here, but those are staggering numbers.

Staggering isn't the same thing as "surprising," though, and there's a reason Miami is struggling when their two stars are in together in this particular matchup. The Spurs' defensive strategy throughout the playoffs has been simple: identify the players who aren't good spot-up shooters and help mercilessly off them to cramp the space their opponent's stars can use. San Antonio is essentially ad-libbing a zone defense based upon the perimeter-shooting tendencies of their opposition.

That defensive scheme is why they swept a Lakers team that saw its perimeter shooters get injured, allowing the Spurs to focus on shutting down Dwight Howard (here's a full breakdown on how the Spurs did that). It's why San Antonio swept a Grizzlies team that handed significant wing minutes to non-shooters Tony Allen and Tayshaun Prince (here's a breakdown on how the Spurs did that to Memphis). It's why the Warriors, with their many shooters, gave the Spurs more trouble than anyone else out West.

San Antonio hasn't changed that strategy in the Finals, either. Wade, given his injuries, decline and style of play, has been the player San Antonio identified to be a poor spot-up shooter that can be helped off mercilessly. That has cramped LeBron's space when the two are in together. The inverse is also true: the Spurs are shrinking Wade's space by helping off LeBron (despite his improved perimeter shooting numbers in the regular season).

When one of the two is out of the game in favor of additional perimeter shooting, though, there's nobody the Spurs can help off, giving LeBron and Wade more space to be themselves and attack San Antonio's air-tight schemes.

As a point of reference, contrast this LeBron post-up:

At first glance, it looks like LeBron was simply more aggressive on the latter play. Take a closer look at San Antonio's help coverages, though. From the first post-up: 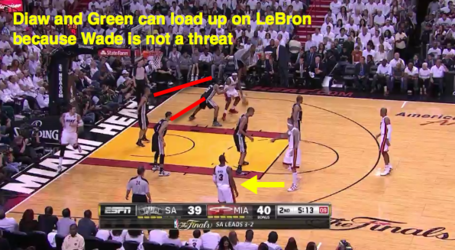 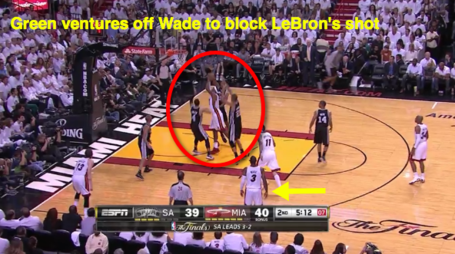 From the second post-up: 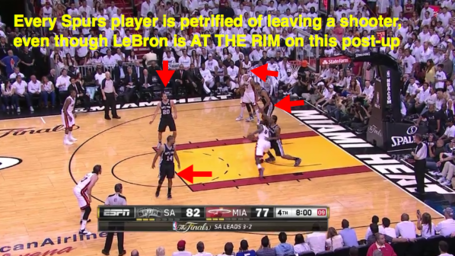 The first play features Danny Green sinking off of Wade and into the lane, joining two other Spurs in bothering LeBron's shot. The Heat make a nice play to recover the rebound and score, but the Spurs' initial defense was sound.

The second play features each Spurs perimeter defender refusing to help Kawhi Leonard as LeBron is bullying him in the middle of the lane. Why? Because that would mean three-point shooters Allen, Mike Miller and Mario Chalmers would be open. The threat of their perimeter shot gives LeBron the space needed to properly get to the basket.

Those examples only happen when shooters are in instead of Wade because, with Wade in, coverages like the first example were the norm. Note how the Spurs leave Wade on this LeBron post-up that ends in a missed fadeaway. 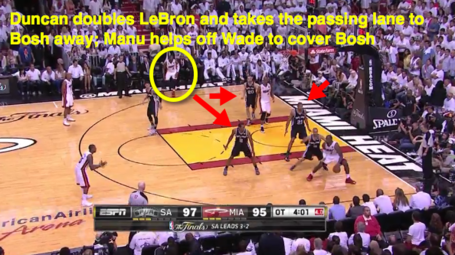 Or how Green and Duncan pinched into the lane with Wade in the opposite corner, preventing the Heat from throwing a lob to LeBron over the top. 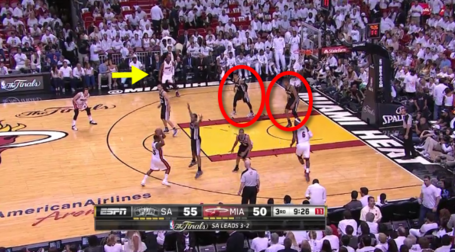 Or how Kawhi Leonard snuck off Wade on this crucial missed LeBron floater late in overtime. 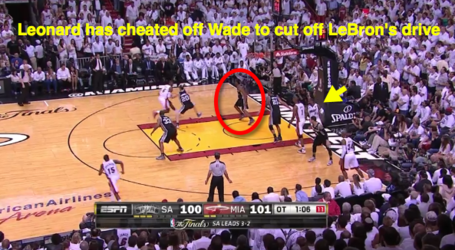 If anything, the effect was even more pronounced when it was Wade trying to drive and LeBron playing off the ball. This was especially true when Boris Diaw was in the game to guard LeBron. Check out Diaw's positioning here. 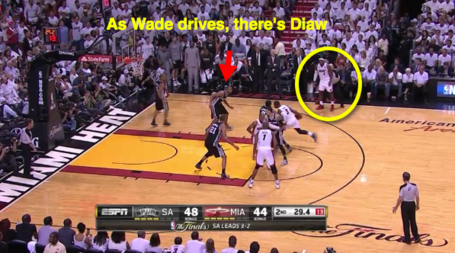 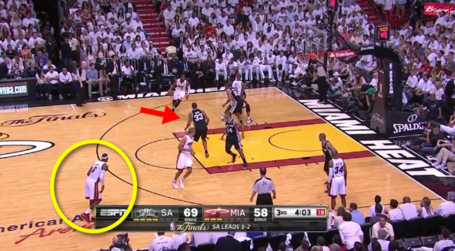 Or here, on a play where Wade tried to drive to the rim and was met by practically the entire Spurs team. 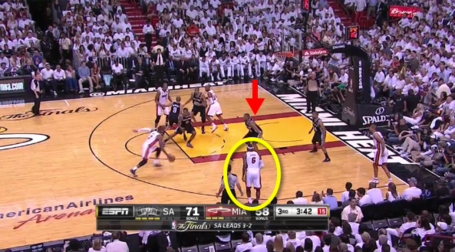 Or here, on a crucial play in overtime. 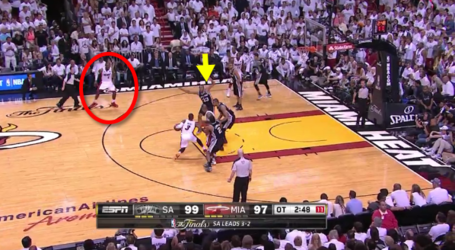 Or, finally, here. This is Miami's final real possession of the game, ending in a Wade stepback jumper that seemed like an awful shot ... until you consider what his other options really were in this situation. 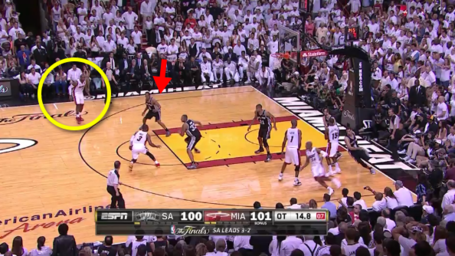 It wasn't just Diaw either. Look at the Spurs' positioning on this third-quarter play. 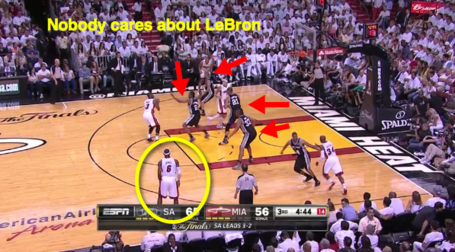 Or this play, which ended with LeBron trying to cut into open space only to be stonewalled by three Spurs defenders. 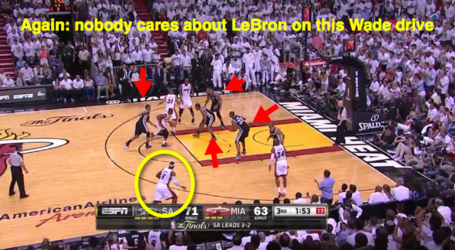 The above plays -- and several others -- had fans initially wondering why LeBron and Wade weren't being aggressive. As it turned out, though, the Spurs were using each player's so-so perimeter shooting against them, cheating off of one to prevent the other from doing what he wants to do. It's hard to fault either player for their lack of aggression when there's no space to operate, unless fans expect them to use a cloak of invisibility to elude Spurs defenders.

Contrast that with all of the sequences from that eight-minute stretch in the fourth quarter when LeBron absolutely dominated. Chalmers and Miller hit threes on the first two plays of the frame and the Spurs were scared to leave anyone open for the rest of that time.

For example, look at where Green and Neal are positioned as LeBron drives on Tiago Splitter. 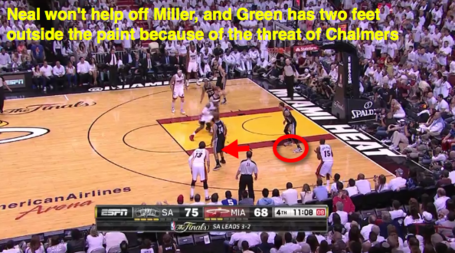 LeBron already has his shoulders by Splitter and Green was still unwilling to help into the lane due to the fear of Chalmers' shooting ability. That's how LeBron is able to get a layup like this.

Neal wouldn't rotate over to prevent LeBron from rolling to the rim for a thunderous dunk because he didn't want to leave Miller open in the corner. 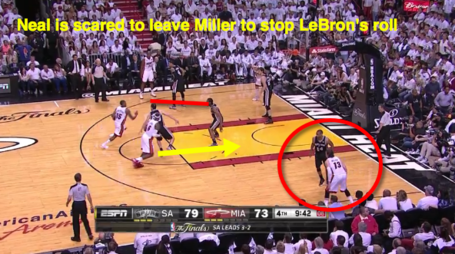 That's how LeBron is allowed to do this.

On this LeBron post-up, the same thing occurs that did in our original example. LeBron ultimately solved the Diaw Riddle because no Spurs player is willing to pinch down off of a shooter to stop LeBron's right-handed drive. 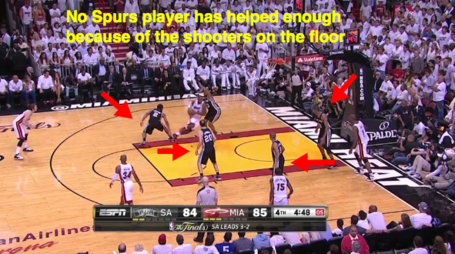 The threat of Miami's perimeter shooters has opened up space for LeBron to see his aggression pay off with strong drives to the basket. This is an element Wade, given his perimeter shooting issues, has not been able to provide.

Even knowing all of that, Erik Spoelstra can't really bench Dwyane Wade for extended periods in Game 7, right?

Probably not, because there are larger cultural issues that a coach must worry about that have to be considered. How can Spoelstra demand his team compete on every possession and then go ahead and bench a player that fought through significant injuries to both of his knees throughout the playoffs? How can Wade, a pillar of Miami's culture, not be given a chance to be on the floor with the season on the line in a do-or-die scenario?

If the Heat don't bench Wade, there are a couple of other options that could help Miami's offense. Spoelstra could stagger Wade and LeBron's minutes, giving each more time away from each other. It's worth noting that lineups featuring Wade without LeBron have outscored the Spurs by an average of 13 points per 100 possessions in the Finals, according to NBA.com's media stats page. That's in a limited 22-minute sample, but the pictures above show that LeBron's perimeter issues cramp Wade's spacing. Perhaps Spoelstra needs to give LeBron-less lineups a little more rope in Game 7.

That action pulled Green away from Wade and left Leonard off-balanced, allowing Wade to attack that closeout and find LeBron for what proved to be the game-winning bucket. Those kind of tricks will be needed if Miami wants to mask their spacing issues with LeBron and Wade in together.

The Heat have tried stuff like that all series, though, and the Spurs have snuffed it out for the most part. For example, San Antonio blew up the same kind of bunch opposite-side formation by sending Neal to double early, throwing off the timing of the play.

Such is the reality, though. To win another championship, the Heat simply need to execute like they've never executed before.

Balancing the spacing issue is going to be Spoelstra's biggest test in Game 7. He needs to figure out a way to give LeBron and Wade space to drive, but he can't get too cute and try to do it by only playing one without the other. Figuring out the proper middle ground may be the key to the Heat repeating as champions.