LeBron James has been under the microscope more than any other player in the league. That's OK, as long as we don't forget why he's so intensely scrutinized in the first place.

"Uneasy lies the head that wears a crown."

This universal truth -- one penned in the late 16th century by renowned wordsmith and noted beard enthusiast Bill Shakespeare -- is an axiom that likely resonates with most prominent people on the planet.

In this Internet age of opinion and access, the concept seems fairly obvious: that individuals of exceptional power, prestige and responsibility are subject to the heightened critiques, sharp criticisms and, ultimately, the unavoidable headaches that are inherent parts of elevated influence and extreme importance in society.

It ain't easy being the king, and it never has been.

Basically, it ain't easy being the king, and it never has been.

As someone who is aware of this reality, I am seldom surprised by the unyielding scrutiny and unrelenting analysis that LeBron James faces as the best basketball player in the world. King James has been a superhuman talent since the start, the most provocative target for any fan or media member trying to flex their muscles or make a name for themselves. Accordingly, every shot, every series and every, ahem, Decision over the course of his career has been examined under the most powerful microscope and dissected with the sharpest of scalpels.

When LeBron misses a jumper in crunch time, he's branded a choker. When he passes up a shot to get his teammate a better one, he's labeled unassertive. When his team is on the brink of elimination, his legacy is questioned. When he has two turnovers late in Game 6, the vultures circle. When his headband falls off, the Internet goes wild!

This absurd level of attention makes perfect sense, though, because aside from wearing the headband (usually), he also wears the crown. He's worn it for a decade. He's LeBron, remember? He's the King. The Chosen One. He's a player of such immense basketball ability and unparalleled physical aptitude that he ascended the throne and accepted all that comes with this position since the very beginning, since the minute he slid on that Cavs jersey for the first time, since he effortlessly gave the Kings 25-9-6-4 in Sacramento in his first NBA game at the age of 18. LeBron is that good, and so he is questioned and scrutinized more than anyone in the league. A quick glance at Twitter, Facebook or any sports website can quickly confirm that.

When LeBron is unstoppable 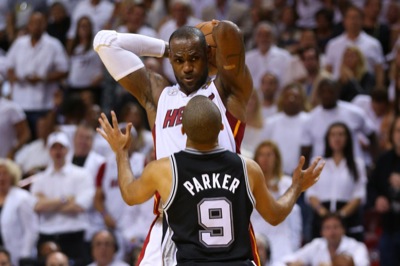 Of course, there are many who give LeBron the type of credit that the best player in the world deserves, but there are so many more who do not. That's unfortunate, not because LeBron is perfect and immune to criticism (this is far from the truth), but rather because the storylines and narratives that focus on critiquing and evaluating all things LeBron often drown out the more meaningful reality: that LeBron James is one of the greatest basketball players we will ever have the privilege of watching. To be fair, most people readily acknowledge LeBron's incredible talent, but with all the noise created by the many "click-worthy" LeBron stories that are concocted out there, do we take ample time to appreciate just how great this guy really is?

Obviously, my answer is "no" because, simply stated, the magnitude of LeBron's greatness astounds me. Maybe it's because I'm also a professional basketball player, or maybe it's because I've shared a court with LeBron and experienced his dominance firsthand (albeit a long time ago). Whatever the reason, I'm legitimately grateful that I get to watch him play basketball on a consistent basis, because he is something extraordinary.

But just how extraordinary is LeBron, exactly? Well, I would never call anyone other than Michael Jordan the greatest of all time, but I think it's safe to say that LeBron will end his career as one of the best to ever play the game of basketball. His insane production on both ends of the court virtually guarantees it, but what's equally amazing is how LeBron dominates: through a punishing combination of size, speed, power, vision, jumping ability, court awareness, feel for the game and a comprehensive skill set that has never been seen before.

To clarify, I'm not saying that LeBron James is a better natural point guard than Chris Paul, nor that he's a more efficient power forward than Tim Duncan. What I'm saying is that, if I was given the choice to pick one NBA player as the point guard of my hypothetical team, around whom I would then build a roster to compete for a championship, without any guarantees of the other type of players I could acquire, my pick would be LeBron, every day of the week. Sure, he's not a born floor general like Paul, Rajon Rondo, or Tony Parker, but if LeBron's your lead guard (or wing, or power forward for that matter), you're automatically a title contender, because he does so insanely much at all of these positions to help a team win. Who else in the NBA can you say that about?

Again, this is just my opinion, but if I'm building a team around a point guard, a shooting guard, a small forward or a power forward, I'm picking LeBron for all four positions. The only other player in the last 40 years who comes close to this level of supreme versatility and wide-ranging effectiveness in relation to his peers was Magic Johnson of the early 80s. Still, unlike LeBron, Magic was too slight of frame to play the four consistently ... and would he have been a better option at the three than Larry Bird?

My point is that no one in the history of the NBA -- even the rookie point guard who jumped center in the '80 Finals before getting 42-15-7-3 to clinch a championship -- can match LeBron's dynamic dominance at so many different positions. That, my friends, is the type of historical greatness that should be appreciated.

Yes, it's easy to take a talent like LeBron for granted. We're used to him now. We're accustomed to him. He's far from perfect, to be sure, but he's the best in the business, and as a result, it's easy to consistently expect the intergalactic level of production that he's provided thus far. LeBron himself admitted this much in 2010, bluntly and directly, after a disappointing performance in Game 5 of the Eastern Conference Semifinals versus Boston. When asked about his (relatively) poor output in the series, LeBron said: "I spoil a lot of people with my play. When you've had three bad games in a seven-year career, it's easy to point that out."

It was a narcissistic statement that was immediately unpopular amongst fans and media -- an example of LeBron's head weighed down from the crown, I think. But here's the crazy part: LeBron was right, and what he said is still true.

People can criticize him all they want, and I'm sure he'll deserve some of it, because he's only human, and no one is perfect. But let's not get so bogged down in the muck that we forget the reality: that we're all lucky to watch this guy play basketball.

Now that's something worth talking about.

• Game 7 preview: Sleep is for suckers

• Spencer Hall: The Spurs are the NBA's team of dads