This week in ENHANCE, we examine a scene from a children's movie about baseball. It won't make any more sense when we're done.

Using the powers of ENHANCE, we're able to pick apart pieces of sports minutiae that deserve closer inspection. (Or ones that don't; we're not picky.) Today, we turn our attention to a montage from the beloved classic timeless green-lit baseball movie Little Big League.

The below scene takes place just before the end of the film, when the Twins are four games in back of the Mariners for a Wild Card spot (lol) and they have to sweep a four-game series against the Indians. This is of course right after the Twins realize they have to Just Have Fun and Play Like Kids Again. So, cue montage.

Unlike most baseball-movie "the team goes on a winning streak" montages (montagii?), this is supposed to be a four-game series against one team. So it's a little incomprehensible and same-y. But let's dig deeper, shall we?

:03: A guy hits a home run! It's in kinda-sorta slow motion, but then it's not. But we don't get to see the flight of the ball or it actually leaving the stadium or anything. We just hear a call, see the Twins celebrating way off in the distance and get to watch the weirdest, herky-jerkiest trot from third base to home plate ever. 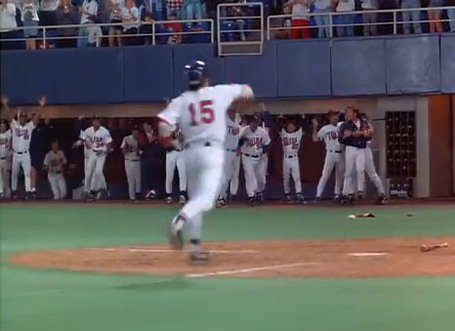 Wait, that screengrab really doesn't do this justice.

Geez, movie extra playing a baseball player in a family movie. Act like you've been there before. Wait, maybe that's just how this person runs? Like QWOP, but with arms?

:10: The montage begins in earnest and is set to the melodious strains of "Runaround Sue." Because when you're trying to depict a baseball team in a pennant race just being clutch and having fun out there, you should always frame it using a song that warns of the tragedies of dating an unacceptably promiscuous woman. ALWAYS. That's just Baseball Movie 101, y'all.

:22: FAT GUY TWINS PLAYER THAT IS NOT KIRBY PUCKETT.

:25: There is dancing going on in the dugout. One of the players is wearing a very large, perhaps "Aretha Franklin-style" wig. Considering that baseball players try to throw each other down flights of stairs for flipping their bat in an inappropriate way, I can't imagine these antics would have been tolerated, even in 1994. I bet that wig guy got beaned in his next 12 to 15 at-bats.

:31: Jonathan Silverman's character has a pump-up baseball glove. In the early- to mid-1990s, everything had to be pumped up. Sneakers, baseball gloves, Hulk Hogan. You name it. 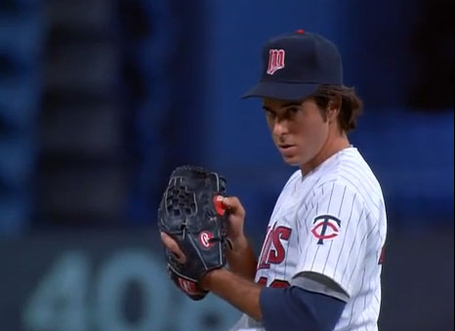 This pump-up baseball glove is a recurring motif in this montage, because Jonathan Silverman's character was the "wacky guy." Which meant he made weird references to Native Americans and dropped lots of non-sequiturs. Nice try, movie, but we've already seen Major League.

:47: Nearly all of the Indians in this montage are being played by actual 1994 Indians players. Nowhere is this more evident than a sudden cut to Carlos Baerga waiting for a pitch. 1994 baseball uniforms had a way of making even Carlos Baerga look like he'd just swallowed a crate of Stanozolol. I mean, he probably had. But still.

:51: Baerga crushes it! A Baergian display of power!

:53: A center fielder (not-so-subtly wearing No. 24) makes an over-the-shoulder catch. Not super impressive, considering he is about 40 or 50 feet shy of the warning track in front of the massive "408 ft." sign. Less "Willie Mays" and more "Willie Why the Hell Were You Playing That Shallow It's Carlos Baerga." 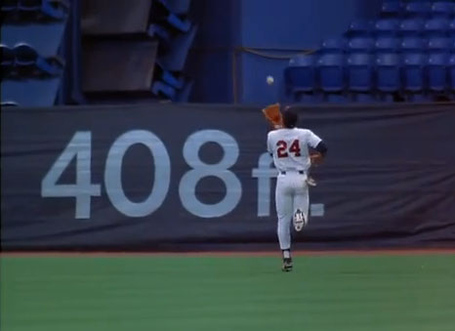 This is as good a time as any to wonder whether they picked the Twins as the team in the movie because of the notoriously sparsely populated Metrodome and the fact that you could film a major motion picture in that stadium and get by with only having like 50 extras the whole time. Heck, they probably could have filmed it DURING a Twins game and nobody would have batted an eye.

1:05: Jonathan Silverman strikes a guy out! 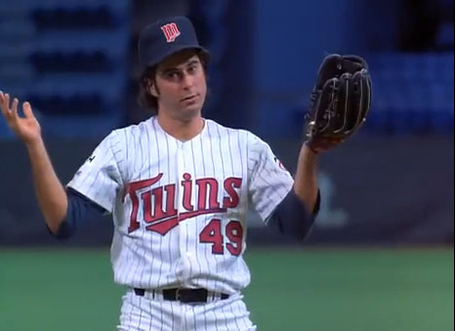 I hear ya, Jonathan. We can't figure out why The Single Guy got canceled, either.

1:19: Minnesota appears to begin to turn the first half of a double play, in slow-motion, while the world's most pleated-pantsed umpire looks on. It's a nifty razzle-dazzle glove-flip/barehand play. Note that neither the shortstop nor the second baseman are played by actual actors.

1:30: We see what we are forced to assume is the second half of that double play, although this could just be a putout, since the angle is completely different and this is a montage and everything. It's a condensed version of four games! We're made to assume this was either the end of the only double play in that series, or the most crucial putout of the four games. Luckily, we don't have any context! Just havin' some fun! Runaround Sue!

1:34: We cut to a reaction in the dugout (again, PRESUMABLY a reaction to the maybe-double play we just saw) that is absolutely baffling. It starts out like this: 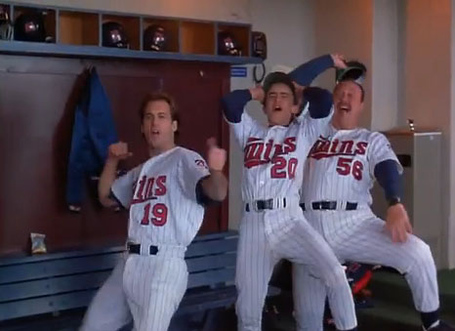 Which seems like they're reacting to something awful that just happened! That's a DYAWWWW NERTZ reaction if I've ever seen one.

(By the way, from left to right, you've got "Grumpy Prima Donna Baseball Superstar Who Doesn't Like A Kid Telling Him What To Do, Aforementioned Kid and Kindly Bench Coach.)

But then Kindly Bench Coach feels like this is an acceptable thing to do in ... celebration? 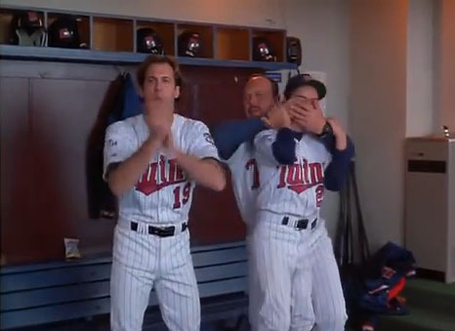 ugh coach what are you doing this is weird 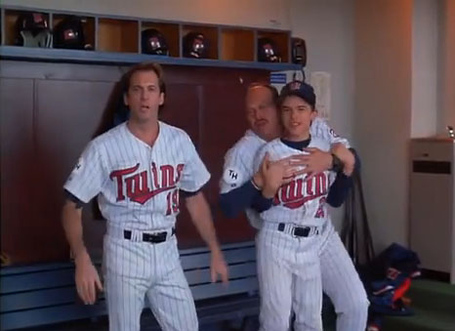 THIS IS NO BETTER AT ALL

1:39: Somehow, this moment of ... levity? ... is enough to win over the Prima Donna guy and he and the kid show each other Begrudging and Hard-Earned Mutual Respect, AKA "Hey, you're alright, kid!" 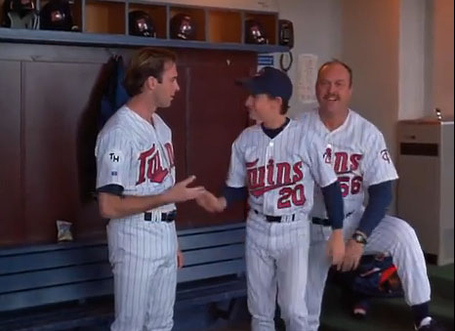 Okay, again, THIS IS BECAUSE OF EITHER A DOUBLE PLAY OR A PUTOUT AT FIRST BASE. What in the hell is even going on here?

1:44: Probably the most important thing you can possibly include in a "things are going great!" baseball movie montage: four batters scrambling out of the batter's box after making contact.

Did they reach base? Did they drive in runs? Were the hits important? We'll never know! Ever! But look at 'em scamper! The fourth guy there almost gets his feet tangled in his bat and kills himself, which Sandy Alomar totally notices.

1:51: More dancing! There's a lot lot lot lot going on here, so I'll just attempt to let the GIF speak for itself.

2:05: Sandy Alomar misses a swipe tag and a run comes home safely on an infield chopper. The guy who scores the run appears to celebrate four times.

So ... maybe he slid in around a swipe tag four times? The ump is in a different position and his helmet does a different thing every time. And it's not different angles of one celebration. At least that much would have made sense. This is one dude celebrating scoring a run -- not even a walk-off home run, since no one else comes out of the dugout to celebrate with him -- and celebrating for possibly up to a full minute, crawling around on his knees and continually putting his helmet on and celebrating it off again. He probably got beaned in every at-bat for the rest of his career. He probably got beaned in the on-deck circle, too.

Here's what we actually have proof of that happened in this four-game series:

- The Twins hit at least one home run, which was worth at least two runs

- The Twins made two defensive plays that MIGHT have made it onto Web Gems, but maybe not

- At least two Indians struck out

- The Twins made at least two putouts, but possibly up to one double play

So we have confirmation of three runs scoring and six defensive outs being made in a four-game Twins series. But I guess there was all that time dancing and playing grab-ass in the dugout. That was what really mattered here. Great montage, everyone!

This is just a reminder that we have two-plus months of uninterrupted baseball before football returns. See you next week!