The Dodgers' electric outfielder hasn't been up for a month yet, but there are calls for him to make the All-Star team. Is this a good idea?

Share All sharing options for: Should Yasiel Puig make the NL All-Star team?

Even before the Marlins were the sad-clown painting of baseball again, they were weird. And right before things spiraled out of control for the Marlins last year, team president David Samson was upset that the team didn't have an All-Star because of injuries. He offered the following suggestions:

"If you look at the fact that this game counts and you need people to win games. Having (Greg) Dobbs as an All Star as a pinch hitter off the bench, having (reliever Steve) Cishek come in and get some righties out. Having Ruggiano coming who is completely clubbing the ball right now. I think he may have as much service time as the guy they named to replace Stanton this year, although I don’t know actually.

"For me it would have been natural to have Ruggiano in who has absolutely played as well as anyone since he was called up. Obviously MLB or Tony or whoever makes the decision has their own view of it and it’s certainly disappointing."

When Samson made those comments, it was July 7 and Ruggiano had 78 at-bats. The Internet pointed and laughed. It was absolutely hilarious for anyone to suggest that 78 at-bats was enough to merit talk of the possibility of the potential to consider thinking about entertaining the idea of All-Star status for a player.

Ruiggiano's stats when Samson suggested he should be an All-Star:

This little history lesson comes up now because Bruce Bochy has hinted that he isn't going to select Yasiel Puig as an All-Star reserve. That news didn't exactly start a firestorm of controversy, but there were more than a few dissenters. The estimable Jay Jaffe, for one. Puig is exciting as all get out, and his presence would help sell the All-Star Game, the argument goes.

Yasiel Puig's stats since being called up:

But the point here isn't to compare Justin Ruggiano to Yasiel Puig as some passive-aggressive Giants fan move to remind everyone that we're dealing with ludicrously small samples, mostly because I'm terrified of Puig. No, no, it isn't that. Puig is clearly a special case. He came up with a firestorm of hype, and he delivered. Ruggiano was a roster afterthought who kept hitting when given a chance. Puig was a top prospect with a scouting pedigree. Ruggiano was a 30-year-old journeyman. They're completely different players and situations. 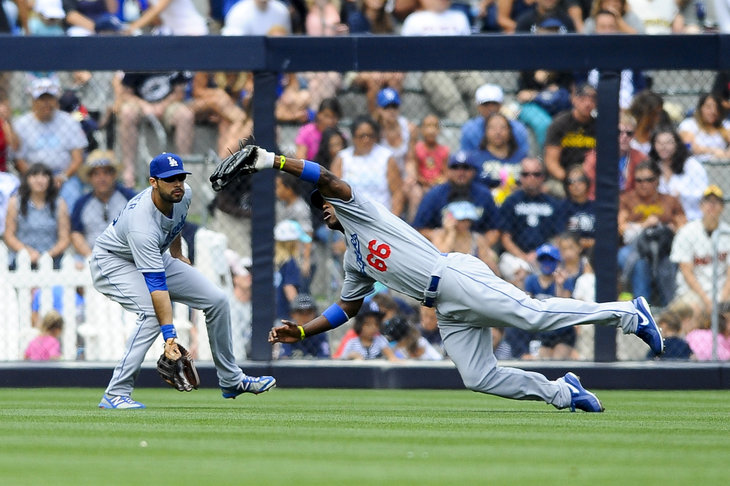 The All-Star Game is supposed to be entertainment. You might be tired of the hoary old arguments about how it shouldn't be the Best Stats Through the End of June Star Game, but they're completely right. In 2001, Jose Valentin was hitting .281/.342/.548 through June with 13 homers as a third baseman for the White Sox. Cal Ripken was hitting .217/.249/.309 with four homers. Ripken made the team (through fan vote), and Valentin didn't. Absolutely no one, even those sharing DNA with Valentin, was disappointed that we had less Valentin in exchange for more Ripken.

Ripken hit a homer and was voted MVP. Alex Rodriguez told Ripken to start at shortstop before the first pitch, just one of the classy moves that comes to mind when we think "A-Rod." It turned out to be one of the more memorable All-Star appearances in the last couple decades.

That's obviously a different situation -- fans voting for a player who was awful at the time -- but it's an example of why the concept of "sample size" and a three-month selection of stats doesn't always make for the best theater. The most exciting (or beloved) players should play. Puig would qualify, it would seem.

But while I'm pretty sure Puig qualifies under the "most exciting" banner, I still can't get over the 73 at-bats. To use Jaffe's list of impressive debuts against him, here are some of the players who have started their careers as quickly as Puig:

Is Puig a McCovey or DiMaggio? Certainly could be. And if so, it would be a shame to leave him off the roster. Future generations will laugh at us.

But what if he's an Alvin Davis, a good player for a time, but hardly a Hall of Famer? The selection will look weird. Future generations will laugh at us.

It seems incredibly unlikely that he's a Mandy Brooks or Dino Restelli, but anything's possible.

That's the point: we don't know anything yet. What the debate does is turn the fans into scouts. Puig's five tools are the stuff of legend, and he looks like the best player in the world. But if Ruben Rivera came up and had a hot 75-at-bat start, he would have looked like the best player in the world, too, because his five tools were the talk of the scouting world. Bochy shouldn't take the scouting into account as if it's a part of some equation. It shouldn't be [(fast start) x (20-to-80 scouting grades)/number of at-bats].

There's another part to that Ripken/Valentin story, too. Eric Chavez didn't make the team in 2001, and he ended up never making a roster. If you go by WAR, he's the fourth-best player in the All-Star era to never make it. The Ripken story was compelling, but it feels like Chavez should have been rewarded with an All-Star spot at some point in his career. If Puig ends up more Reggie Sanders than Ted Williams, the hasty decision to put him on the roster could hose the Eric Chavez of today.

The All-Star Game is about excitement (except for all the boring parts), and Puig should definitely be considered. But the All-Star Game isn't about looking into a crystal ball to see who the stars of tomorrow are and reacting accordingly. If Puig really is this good, this exciting, he'll be back every single year. And if he isn't back every single year, well, that's proof he shouldn't have made it because of 100 at-bats or so, right?

Puig is good. He might be great. He might change the game of baseball. But he's the first page of a 600-page novel right now. Let's hold off on the Pulitzer nominations for at least another couple of months.