In Mike MacIntyre, Colorado brought in a head coach who did at San Jose State exactly what he will be asked to do in Boulder: salvage a broken program. MacIntyre's track record is fantastic, but even if he succeeds at CU, it's going to take some time. For more Buffs, visit Ralphie Report.

Share All sharing options for: 2013 Colorado football's 10 things to know: And now we wait

One hundred twenty-fourth. Colorado ranked 124th in last year's F/+ rankings. The Buffs had the sixth-worst offense in the country, the third-worst special teams, and the second-worst defense.

Aside from one miraculous quarter against Washington State (down 31-14 early in the fourth quarter, they rallied to win, 35-34), they were almost completely hopeless. They lost to Sacramento State and Colorado State. They lost by 56 to Oregon, 55 to Fresno State, 48 to Stanford, 44 to USC, 35 to Washington, 34 to Arizona State, and 28 to UCLA. Even if you don't truly believe that this was the worst team in FBS -- even if you have to lower yourself to saying things like "Come on, they weren't worse than New Mexico State; they did beat (3-9) Washington State, after all!" -- you have to admit that the Buffaloes were in the conversation.

Twenty-two years after a national title and 11 years after a Big 12 title, this program, which had already run off the rails, became an outright embarrassment.

I'm almost always a fan of giving a new coach three years to find his way. You need to get your own pieces in place to truly have a chance to succeed long-term, and two years in, you're either still dealing with your predecessor's players, or you have a lot of your own freshmen and redshirt freshmen on the field. It's just so hard to get a read for your abilities after two years on the job.

But in the case of Jon Embree, however, I know exactly why he was let go: Colorado simply didn't have a choice. Colorado fell further than it should ever fall in 2011-12, and there was a virtually zero percent chance that Embree was going to be able to turn the ship around in the next year or two. The only decent reason for giving him a third year would have simply been to see if he could stop the free fall and perhaps attract a better replacement candidate, a la Washington State with Paul Wulff. Wazzu plummeted to 120th (dead last, too) in F/+ in both 2008 and 2009, then improved to 107th and 94th in 2010-11; Wulff was let go after four years instead of two, but perhaps in part because of the improvement, the Cougars were able to attract Mike Leach to Pullman.

Colorado could have hamstrung itself by parting ways with Embree and looking for a new coach to take over a decrepit program, one of the worst in the country. But in Mike MacIntyre, they made a good hire that may turn out to be a terrific hire. MacIntyre's not only rebuilt an awful program before; he did it in record time. He inherited a San Jose State squad that had ranked 116th in 2009 and gone just 1-11 in 2010. After an awful first season, the Spartans quickly gained traction, improving to 82nd and 5-7 in 2011, then to 32nd and 11-2 in 2012.

Success at one job in no way guarantees success at another. But considering his resume, considering his clear success in the field of reclamation projects, this was the best hire Colorado could have made. His known skill set perfectly matches Colorado's needs. The Buffs are almost certainly going to still stink in 2013, but MacIntyre could get that program running in the coming seasons. I like this hire as much as I disliked the Embree hire.

Colorado athletic director Mike Bohn recently resigned, in part because of CU's athletic failures under his watch. But on his way out the door, he might have set in motion a fix to his biggest failure.

2. It just kept getting worse

As you'll see below, a combination of injuries and pure lack of talent led to Colorado playing an insane number of youngsters in 2012. When that's the case, the season can go in one of two ways; either you take your lumps early and slowly improve as the season progresses, or you take your lumps early and fall apart. Colorado went with the latter, and it probably got Embree fired.

3. Every job is up for grabs

When a team falls this low, the first thing you expect a new coach to say upon taking over is some variation of "Every job is up for grabs." In fact, I'm not even going to look up whether MacIntyre actually said it -- I will simply assume he did.

Last year's Colorado team was incredibly young, and will be only marginally more experienced this time around. That might not be a bad thing. 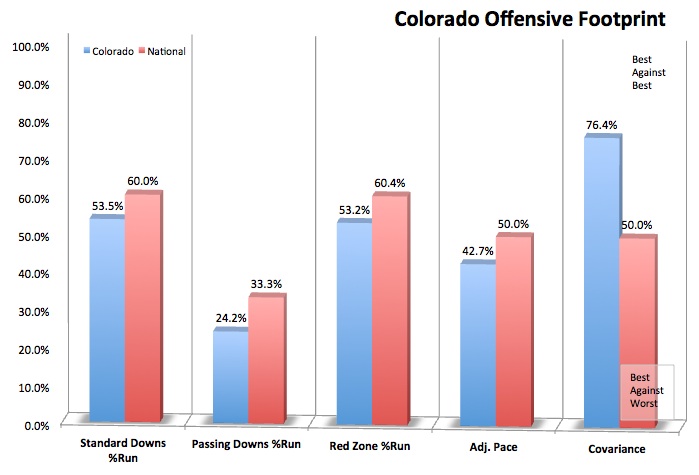 Three Colorado quarterbacks combined to average 4.4 yards per pass attempt last year. That is almost indescribably bad. That the Buffs played some good defenses along the way meant they ranked all the way up at 115th in Passing S&P+, but this was an almost unredeemable passing game.

Jordan Webb was an outright statue, the Tino Sunseri of the west, getting sacked once in every eight pass attempts. Meanwhile, Nick Hirschmann got sacked nine percent of the time and threw interceptions on eight percent of his throws. Connor Wood avoided sacks pretty well but threw an interception for every 11.5 passes.

Webb tore up his knee in spring ball, and Hirschmann transferred, but I cannot even begin to pretend that's a problem. Wood finished the spring atop the depth chart, and if a youngster can overtake the Texas transfer, that's all the better.

5. The running game should come around first

Paul Richardson's return to the Colorado receiving corps after multiple injuries can only help. The junior-to-be wooed Colorado fans with a ridiculous, 11-catch, 284-yard performance against California early in 2011, but he caught only 28 passes for 271 yards the rest of the year and missed four games with injury, then injured his knee in spring 2012. His ceiling is lower than what CU fans saw against Cal, but it's still higher than just about anybody else's in the receiving corps.

The only 2012 regular to average better than a less-than-mediocre 6.8 yards per target (tight end Nick Kasa) is gone, leaving behind a smattering of unproven pieces. It's easy to see Richardson and sophomore possession receiver Nelson Spruce forming a nice tandem, but there are a lot of nicer tandems in the Pac-12.

On the other hand, it's not difficult to become a little more optimistic about the running game. Last year's top four running backs all return. Christian Powell was a nice between-the-tackles option, while both Tony Jones and Donta Abron showed solid open-field ability when given the rare opportunity. Meanwhile, the line did a decent job of keeping defenders out of the backfield (and a poor job at most everything else) and returns five players with starting experience (52 career starts). Compared to the passing game, the run has some potential. 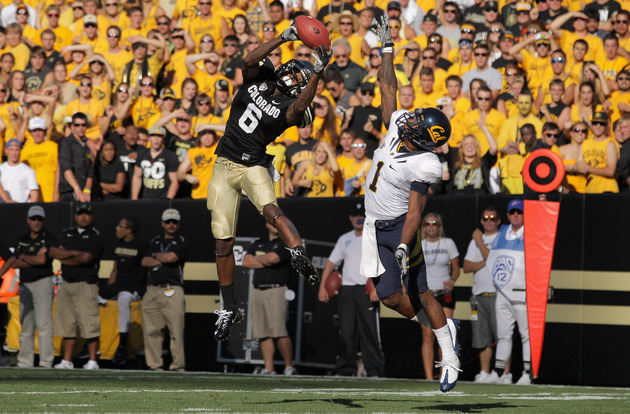 6. "The offensive line is pretty athletic"

When I spoke to MacIntyre back in February, he was still in the process of getting to know his personnel at hand, and he seemed pretty realistic about the challenges ahead. It is probably worth noting, however, that he showed at least a little bit of optimism about the line:

The offensive line is pretty athletic, there’s a real athletic receiver who didn't play last year [Richardson], and they had some young running backs who did a good job. ... You'd like to settle in on one quarterback at some point; we'll let 'em all compete in the spring and see where that falls.

We’ve got to improve our overall team speed. We feel we’re bringing in some guys from this recruiting class who can help with that. 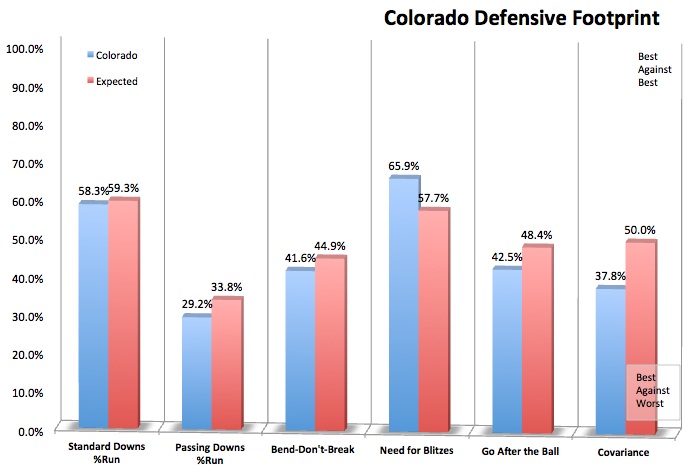 The positive spin, of course, is that this defense has quite a bit of experience. But that only matters if the health turns around. 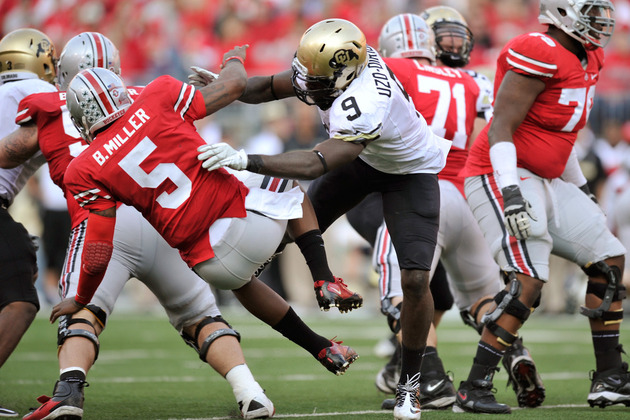 Embree's two recruiting classes were not loaded with blue-chippers, but he did land a couple of interesting defensive backs last year in corners Kenneth Crawley and Yuri Wright. They were two of four freshmen who saw playing time last year; two freshman tackles were also heavily in the rotation. Though Colorado couldn't hold onto an interception to save its life, Crawley's work (three tackles for loss, five passes broken up), alongside that of then-sophomore Greg Henderson, is intriguing. Terrel Smith and Parker Orms are seniors, but in 2014, Crawley, Henderson, Wright, Marques Mosley, and current first-string safety Jered Bell are all still going to have eligibility remaining.

Combined with a decent pass rush from a line that features only two seniors among its eight returnees, it's easy to see Colorado's pass defense coming around next season.

Actually, that goes for the defense as a whole. When you fall as far as CU's did in 2012, there are probably no quick routes back to competence. But there are certainly interesting sophomores and juniors at each level of the defense -- tackles Josh Tupou and Tyler Henington, end Kirk Poston, linebacker Brady Daigh, and the aforementioned defensive backs -- who could form the base of a solid unit as soon as next year. Or maybe the year after. But it will probably take at least a little while for defensive coordinator Kent Baer (who followed MacIntyre from San Jose) to get enough pieces on the field to succeed.

Granted, punt returns and breakdowns in kick coverage held this unit back quite a bit, but in kick returner Marques Mosley, place-kicker Will Oliver, and especially punter Darragh O'Neill, special teams has some potential stars. San Jose State's special teams unit came around before the offense or defense (16th in Special Teams F/+ in 2011), and we could see the same thing here.

10. San Jose State barely improved in MacIntyre's first year (and he wasn't in the Pac-12)

The good news: Up to five games are potentially winnable this year, maybe six with an upset.

In Tuesday's Washington State preview, I once again mentioned the concept of Year Zero, in which it takes even a really good coach a while to get pieces in place. I fully expect that in Boulder in 2013. Again, MacIntyre has very much proved his worth early in his head coaching career, and he did at San Jose State exactly what he's being asked to do at Colorado. But it's going to take a while. The passing game is still a mess, and the defense just fell too far in 2012 to pin everything on injuries.

Colorado is proof of what can happen when you make a coaching hire based on short-term buzz and pleasantries. Embree had no coaching experience higher than tight ends coach, and he had never worked with a lot of his assistants, but he was a former Buffalo, as were a lot of the coaches he hired. As I put it in 2011, "The band is getting back together, and that always feels good for a little while." But the reunion tour usually falls apart at some point.

While hiring at your lowest point can often lead to shaky results, CU hit a home run, on paper, with MacIntyre. There are no guarantees, but the Buffs appear to be taking the proper steps toward righting previous wrongs. Now they just have to sit and wait a while.

2013 Pac-12 football preview countdown: Bill Connelly on every team, one by one