Aaron Hernandez has been charged with six crimes, including first degree murder. What do the various charges mean?

A busy Wednesday saw Aaron Hernandez arrested, released by the New England Patriots and then arraigned in Attleboro District Court. The prosecution read off the charges, along with their narrative of the crime. The first thing that stood out at the arraignment (as well as the first detail to be widely reported) was a charge of first degree murder. Hernandez is the first NFL player to be charged with murder since Rae Carruth was charged with conspiracy to commit first degree murder.

While the murder charge is the big one, there are five gun-related charges as well. Hernandez is charged with: 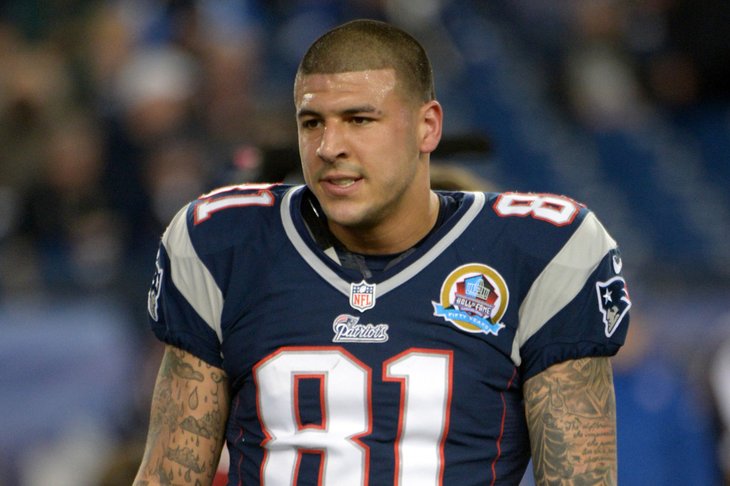 By releasing tight end Aaron Hernandez, the New England Patriots have cast aside football concerns and have made the right call.
Here's an explanation of how these charges break down.

Under Massachusetts law, murder occurs in the first degree when it is "committed with deliberately premeditated malice aforethought, or with extreme atrocity or cruelty, or in the commission or attempted commission of a crime." If convicted of first degree murder, Hernandez would get life imprisonment without the possibility of parole. Massachusetts previously had the death penalty, but it was abolished in 1984.

Given that the allegations suggest Odin Lloyd was shot in the back and when found to still be alive was subsequently shot again, it is not surprising the prosecutor went for first degree murder. Furthermore, Hernandez is alleged to have said, "you can't trust anyone anymore", while carrying a gun, just prior to picking up Lloyd. If the prosecutor can prove this occurred, that would fit right in with premeditation.

The five gun charges each carry varying sentencing possibilities. Hernandez has not yet been formally indicted on the charges and in the meantime much of this information remains sealed. We do not know the specific sections of the Massachusetts criminal code for which he is being charged. The police executed multiple warrants at Hernandez's home, and removed upwards of 10 bags and a box during their search. Once the case proceeds to the formal indictment, we will get a better idea of the specifics of the gun charges.

• Vernon Davis on Seahawks: "They're building a dynasty"