Yasiel Puig has 37 hits in June, and there are still three days left. Here's how he's doing it, and why we should all be terrified.

Share All sharing options for: Five notes after watching every Yasiel Puig hit

Yasiel Puig plays baseball like he has bees in his pants. Here he is after an infield single in the bottom of the ninth inning, with the Dodgers down by three runs.

He just wants to get to the dugout to get rid of those bees, guys. They're bitey. And this bee problem extends to the field, too, where he's constantly in danger of running into players and/or walls. Can't really think straight because of the bees. And they also make him angry, so you should probably just stay out of his way.

Puig also hits a little bit. You've probably heard something about this. Puig has been hitting baseballs with a cylindrical stick, and they've been going all over the ballpark. I just watched all 38 Puig hits this season. It kind of felt like I was H.I. McDunnough watching a video feed of Leonard Smalls coming for me and my family. After some prescription medication, I'm mostly fine, though.

Part of me wanted to watch all of them because I wanted to find the kryptonite. I wanted to Nancy Drew my way into discovering a hole in his swing or flaw in his approach, and I wanted there to be a ticker-tape parade in my honor. BLOGGER SAVES WORLD, the banners would read. Alas, this did not happen.

The other part of me wanted to watch all of them because Puig is one of the most fascinating hitters in recent years. And I did notice a few things about Puig and his approach, which I'll list here:

I almost led with "he's talented" or "he's a big dude" because they would be just as revelatory. But even though I knew this, I was still surprised at how aggressive. Of his 38 hits so far, 27 came within the first two pitches of the at-bat. Fourteen came on the first pitch of the at-bat.

2. Yes, there have been a lot of infield hits

BABIPuig, as it were. Nine of his 38 hits have been infield hits, including two bunts. So if you wanted to know if Puig is going to hit .427 for his career, probably not. But his speed will keep him in the infield-hit business for a while, so you can't just eliminate his infield hits and say "Okay, he's really only hit .326 so far. Calm down, everybody." Those hits count, too.

3. He is not a bad-ball hitter

This was the biggest surprise for me. His last hit was a game-winning single through the hole on the left side. It came on an 0-2 slider, and it was pretty close to where Justin De Fratus probably wanted to throw it:

It was off the plate, just below the outside corner of the zone. And it made me wonder if he was a bad-ball hitter, the kind of guy who can hit pitches at his toes, like Pablo Sandoval or Vladimir Guerrero. He is not.

The overwhelming majority of his hits have come on pitches in the strike zone. Of his 38 hits, only one came on a pitch that was clearly out of the strike zone, and that was an infield hit. He has three hits on inside pitches that were a little off the inside in the same game, but they're a special case that we'll get to in a second. For the most part, he's punishing pitches in the zone. In a lot of cases, these are good pitches, mind you, on the edges of the zone. Pitchers' pitches. But Puig needs the ball to be close to the zone for him to be effective.

4. Yasiel Puig does not care for your first-pitch, get-it-in off-speed stuff in the middle of the strike zone


5. His plate coverage is unreal

Back to those pitches off the inside edge that we were talking about. They both came against the Giants on Wednesday. Here are some pitch charts that show his three hits in that game. The first chart shows his first two hits, against Tim Lincecum, and the second graph shows his third hit of the game, off Sandy Rosario: 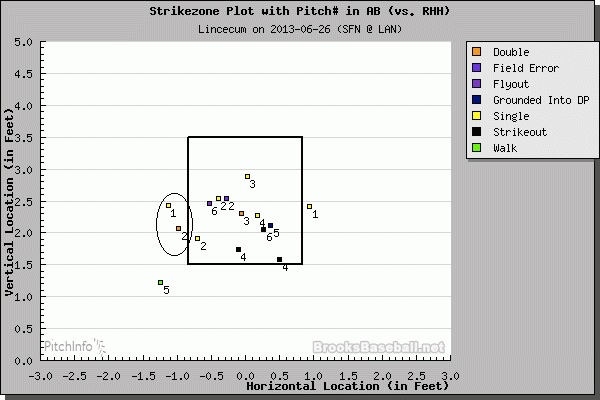 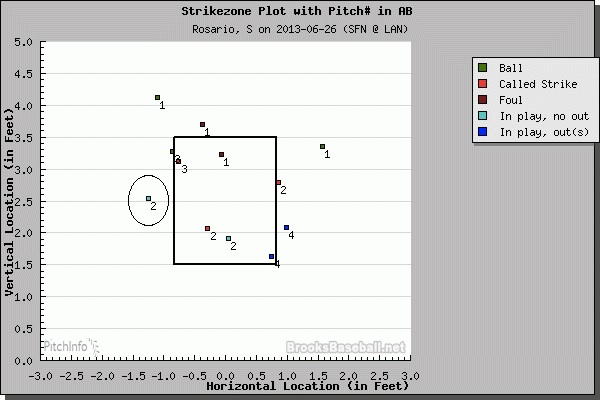 That might look impossible to you, but these charts don't show you where Puig stands in the box. I'll use some screen caps from the gorgeous dead-center camera in Pittsburgh to give you an idea of what he can do with a pitch that should be on his hands. 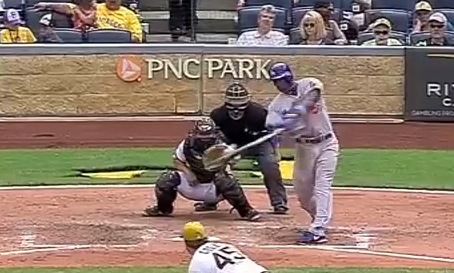 He even made MLB.tv do one of those The Ring kind of horror-movie special effects on the swing.

That's not in on his hands. That's in his wheelhouse. So the best thing to do is pitch him on the outside edge, right?

Madison Bumgarner on that home run:

"It didn’t make much sense for me."

Nope. Nope, it sure didn't. But it wasn't just that at-bat. Puig's first major-league hit was on a ball in the low-right corner of the zone. His third hit was on a fastball up that was right on the outside edge. Almost a quarter of his hits have come on balls that I marked as "on the edge."

Try reconciling that. He can pull balls that should be in on his hands because he stands so far away, but he has no problem with pitches on the outside part of the plate, either.

Eventually the league will make an adjustment. A hitter this aggressive can't keep hitting .400 and pulling balls on the outside corner for hits. The league will make an adjustment, and Puig will make a counter-adjustment. This has been the paradigm for a century or so. I'm not smart enough to know what that adjustment is, though. Don't throw Puig strikes, for one. But if you throw him balls, make sure they aren't off the plate on the inside. Really, the perfect pitch to Puig might be the one that had the game-winning hit on in the Dodgers' last game against the Phillies. So … don't do that, either?

At this time last year, anonymous scouts were saying things like, "I'm not even sure if we'd use a first-round pick on Puig if he were in the draft." Well, say. Looks like he's kind of good. And when you watch exactly how he's doing it, it's hard to know how he's doing it at all. This shouldn't be real.

For more on the Dodgers and Puig, please visit True Blue LA

• The iconography of baseball

• Carlos Marmol’s career with the Cubs

• Twins and the continuing fear of strikeouts