Share All sharing options for: Josh Hamilton: 365 days ... and counting

Q: Have you ever struggled this long?

A: Never. Ever. From the time I picked up a ball until now, no.

Q: Are you worried about it?

A: No, because the proof is what's gone on in the past. I've struggled at times, and I've always come out of it.

Got it. Not worried at all. No sir.

Q: So are you confident you will get out of it this time?

A: I can't predict the freaking future. Do you want me to go say I suck and sit in my locker?

Q: Do you think your struggles in the second half last year and so far this year might be connected, or are they totally separate issues?

If Hamilton really doesn't know, Angels fans should probably be worried. Because "last year" is just semi-relevant. We must always beware of arbitrary endpoints, so let's be utterly non-arbitrary and choose a perfectly round period of time: one year.

Over the last calendar year, 61 outfielders have at least 500 plate appearances. Among those 61, Josh Hamilton's .323 wOBA ranks 37th; his Wins Above Replacement -- thanks to poor fielding numbers -- makes him look even worse. This was just going to be about Hamilton, but this list is interesting to me so I'm going to share the bottom nine outfielders, according to FanGraphs' Wins+ ...

We could spend an hour picking through that list, but for the moment I'm struck by the similarities between the Dodgers and the Angels this season. Most of the guys on this list, you can make excuses ... Stubbs, Davis, and Viciedo are cheap. Francoeur's been relieved of every-day duties, and Young's probably next. But Hamilton and Kemp both are paid copious amounts of money by big-budget clubs that have been terribly disappointing.

Hamilton's walk rate has dropped from his peak, and his strikeout rate has risen. But what's really killed him is pretty obvious: Batting Average on Balls in Play. Over this last calendar year, Hamilton's BABiP is just .285, which is seventh on this list -- Francoeur's easily the worst, at .257 -- and pales next to Hamilton's .330 career mark (which of course was even higher before this last calendar year).

What if Hamilton were on the market again? 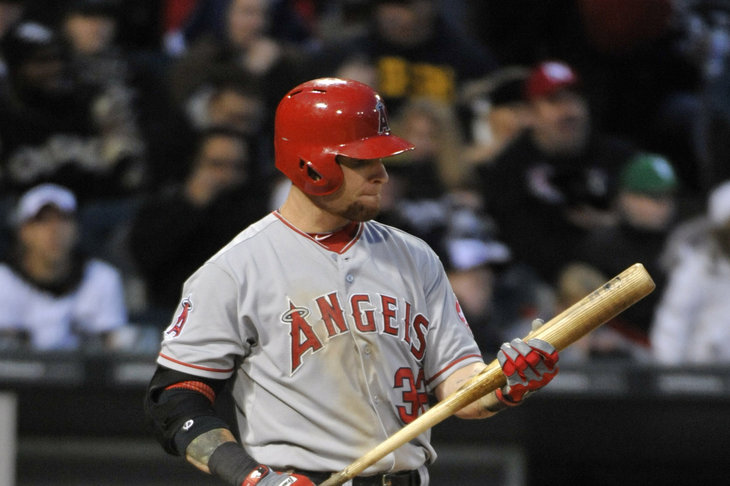 If Josh Hamilton were on the market right now, would he get the same contract, or something much smaller? Almost certainly the latter. But how much smaller?

We're left with a couple of possibilities: Hamilton's been hitting in astoundingly poor luck for a year, or he simply hasn't been hitting the ball as hard as he used to. Of course there's probably some of both, and this recent FanGraphs piece lends a lot of credence to the notion that it's not all bad luck: after years of averaging 290-300 feet on his fly balls, Hamilton's recently been around 270 feet per fly ball. Maybe he's actually weaker, or maybe he's just not squaring up the ball like he used to, but the impact is the same: he's not hitting the ball nearly hard enough to justify his salary.

Oh, and by the way? Matt Kemp's fly-ball distance is way down, too. At least Kemp has the excuse of his off-season shoulder surgery; maybe his shoulder will heal while his hamstring is improving. And maybe Hamilton's proof will prove out, and he'll come out of this. But considering their teams' current places in the standings, anything good that happens to Hamilton and Kemp this season probably won't happen soon enough. But of course both contracts have a long ways to run, so something good this season would make some front-office types' winters a lot more comfortable.

• Is there any fixing the Nationals?