There was baseball over the weekend. Let's discuss it.

There was baseball over the weekend, and you didn't watch all of it. Neither did I. If you were a football fan on a Monday morning, you would have seen the same highlights 16 times by now. Ah, but there's usually about 42 hours of football every weekend, and that includes the 41 hours of commercials. There's about 135 hours of baseball from Friday through Sunday, and you can bet that includes the 134 hours of batters adjusting their batting gloves. Because that's part of the charm.

But that makes it hard to catch up. Let us catch up together. There's a hamburger-topping joke in that last sentence, but I'm too busy catching up on baseball to make it. Onward!

So much rain. Personally, I wore shorts and barbecued all weekend, so it was hard to imagine*, but there was just a ton of rain around the majors. The Giants/Cardinals game was rained out on Friday night, and the Red Sox/Yankees game ended prematurely on Sunday night. Probably because God is sick of Red Sox/Yankees games on ESPN, too. But I don't want to be controversial! That's just a theory.

In Cleveland, there was a torrent of bad weather on Friday, but the weekend forecasts weren't much better. Add in that the Indians and Rays didn't have another series together, and that they didn't have a shared off-day, and everyone involved was determined to get the game in. That led to a four-hour, 49-minute rain delay. Think about that. Four hours. Forty-nine minutes. On a Friday night. When the weather is miserable. There were still a handful of fans in the stands after the last out. They should have received a … dunno, Indians jacket or new car for sticking around. That's dedication.

Right after the epoch of rain, the Rays jumped all over the Indians' bullpen. Waited around for five hours? Your reward wasn't what you expected. It turned into a laugher.

Any game with 17 innings is interesting. But it can't be great until a position player pitches, so this is on the second tier of interesting. Still, 17 innings, good gravy. Representative comments from the team blogs. First from Gas Lamp Ball ...

The Padres won, and that means they got to continue their new walk-off tradition of showering a photogenic reporter with various liquids and sundries. I'm sure this won't catch on.

It's a long season. All sorts of things will happen. Vernon Wells will get a save. Matt Garza will hit for the cycle. It's a long season. But this is the last time the Astros and Marlins will each sweep a weekend series in the same weekend. Until 2015. But certainly for this year, too. 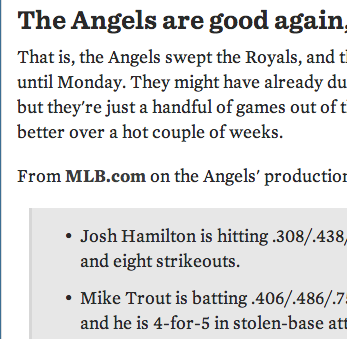 Phhbbbbtttbbbbbbt. That'll take a little wind of the sails of a newly resurgent team, getting swept by the Astros. Houston got seven strong innings from Dallas Keuchel on Friday, six strong from Bud Norris on Saturday, and nearly six strong from Jordan Lyles on Sunday. Do you realize why Jordan Lyles did in the spring? He allowed 36 hits in 11 innings. That's not a typo or a cute joke. Then he went to Triple-A and allowed 14 runs in 23 innings, striking out 11. But he shut down the Angels to complete an Astros sweep.

The Marlins upended the hapless Mets, who aren't as hapless as the Marlins, but slummed it for a weekend. The Marlins jumped on Matt Harvey to complete the sweep, but the most impressive game of the series was Saturday, when Jose Fernandez pitched seven scoreless innings, striking out eight and walking just one. He did it on 87 pitches.

That brings up an interesting hypothetical question: Harvey or Fernandez? In 15 years, we'll look back and know that the real answer is, like, Stan Tample, a 38th-round pick of the Nationals this week, but for now we can ignore that baseball is a jerk when it comes to young pitchers. Considering that when Harvey was 20, he had a 5.40 ERA for North Carolina … I'll go Fernandez.

Both are amazing, but the kid has an advanced feel for pitching that doesn't come around too often. Before you get too mad, Mets fans, just think about what they'll look like pitching together in four years.

The scuttlebutt on the Giants broadcast was that Molina was winging his helmet because he was upset with himself, not the call. They showed replays that seemed to show Molina taking a hit for granted out of the box, which is a clause that has never, ever, ever been typed in the history of personal computers. 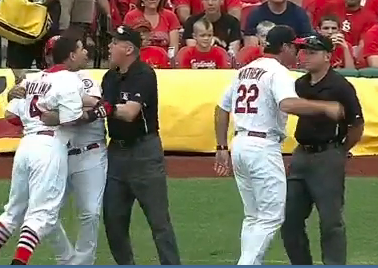 … then a bunch of grown men can keep it together. Come on, Yadier.

Of course, it's a tough gig, this umpiring. Take this pitch, for example:

That's what got Terry Francona ejected. Looks like a ball when you go by the naked eye, but the fancy lasers and such say it was a strike. If it's even half as close as the newfangled technology makes it seem, that's a pretty sketchy thing to get yelled at. That's like someone coming out to yell at me for using the wrong there/they're/their when all I did was use a serial comma. Which is always right.

If I had the job security of Don Mattingly, I'd go out to argue without any pants on, but I guess that's why I'm not a manager in the first place. Mattingly was tossed for arguing a play that was too close to tell even on replay.

You think umpiring is easy? Take a look at these still pictures. 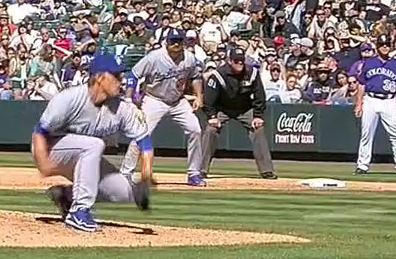 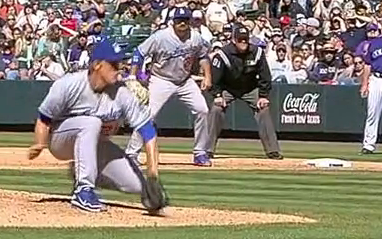 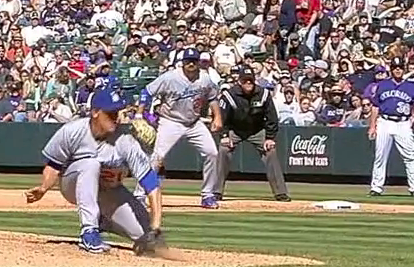 Still can't tell. Now imagine the ball coming off the bat at 100 m.p.h. and the entire play happening in less than a second. There's no way to expect perfection in those circumstances, but it looks like the umpires got the call right.

The important thing is that Angel Hernandez is still awful. He wasn't working that game, but still ... feels important to note.