Share All sharing options for: 130 Pitches: A Baseball Mystery!

But of course it's merely continuing a trend. The days when Nolan Ryan might throw 180-some pitches over the course of a dozen innings are long gone. I get that, and I don't really mind. Here's the mystery, though, from Grant's essay: 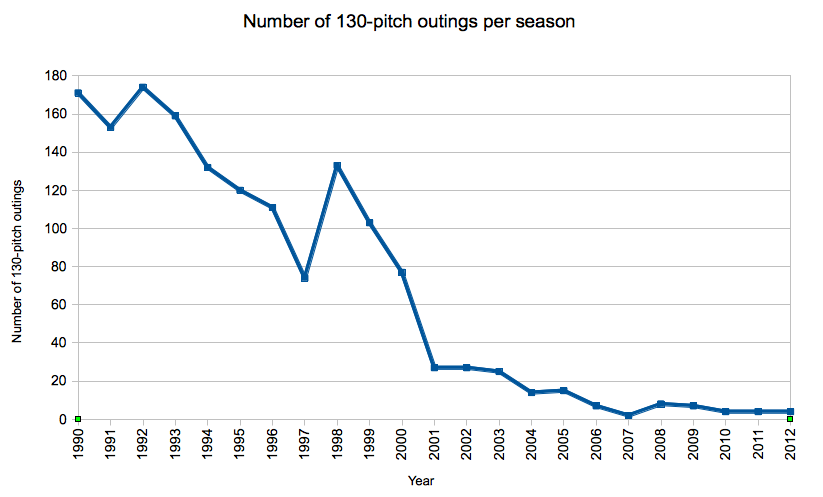 Actually, there are two baseball mysteries here. The first, which I'm going to ignore because I'm not at all prepared, is what happened between 1997 and '98, when 130-pitch outings took a massive leap, from 77 to 133. If you have any ideas about that one, please let me know.

Or maybe everybody just figured something out at the same time. That's what I'm trying to figure out.

First thing I did was e-mail some baseball people who were around back in 2001, and ask them if they remembered anything that might have accounted for that

1. When did Verducci write his article on inning progressions?
His first piece about the Year-After Effect was published in 2003, by which point the massive decrease in 130-pitch starts had already happened.

2. When did the Cubs' star pitchers start breaking down after Dusty Baker let them pile up the pitches?
Kerry Wood missed the entire 2000 season with an elbow injury; Prior didn't reach the majors until 2002. It's possible that his injury got people to thinking.

3. What about the Mets' so-called Generation K?
There was a great deal of talk about the Mets' three premier pitching prospects -- Jason Isringhausen, Bill Pulsipher, and Paul Wilson -- all of whom basically flamed out. By 2001, the trio had combined for a 28-43 record with the Mets while suffering through injury-plagued careers. And just about everybody blamed overuse.

4. What happened to pitcher's contracts at that time? Was the money going up significantly? I remember it went up dramatically between 2004-2005, but I don't recall 2000-2001.
Good question. The big contract that winter were Alex Rodriguez (10 years, $252 million) and Manny Ramirez (8 years, $160 million). Mike Mussina, on the other hand, got 6 years and $88.5 million on his new deal with the Orioles. Oh, and in one of the worst deals ever, the Rockies gave Mike Hampton an eight-year, $121 million deal. Denny Neagle, Kevin Appier, and Darren Dreifort all got roughly $10 million per season on long-term deals; none of those worked out well at all, but it's hard to figure how those disasters would have affected managerial decisions in 2001. Granted, managers might have been advised by their bosses to protect those big investments (not that it helped much).

5. I don't have any precise memory, but I do know that it was about that time that we started to look more closely at workloads and pitcher's health. And wasn't that around the same time that Keith Woolner and Rany Jazayerli introduced Pitcher Abuse Points in the Baseball Prospectus annual?
Well, yeah. Sort of. In the 2001 Baseball Prospectus -- which would presumably have first appeared in the latter stages of spring training -- Jazayerl reintroduced Pitcher Abuse Points. First, Rany admitted that he had, in his earlier writings about the first version of PAP, "violated one of the fundamental rules of science: I had not presented the evidence. I had not, in fact, found any evidence."

So Jazayerli and Woolner went back to the ol' drawing board, and came up with something they called PAP3, and something else called STRESS. All of which was based on the separation of pitch counts into five categories. Here they are, and see if you notice something that might be connected to our Baseball Mystery ...

Category I
Pitches: 1-104
Risk: Virtually none

In case you missed it, here's what jumped out at me:

Before I started asking questions, if you'd told me that Baseball Prospectus made a big difference in 2001, I wouldn't have believed you. Not because those guys weren't doing great work. They were. But because, frankly, I wouldn't have guessed that more than a dozen or so people who actually worked in baseball were actually reading Baseball Prospectus ... and that just a minority of those people were managers or general managers.

But 133 pitches SEVERE RISK is close enough to 130 that it's hard to figure there's no connection here at all. I was around then, and I can tell you there was a great deal of talk, in some quarters anyway, about Generation K and Kerry Wood (among his nicknames in 1998: "Kid K") and others having gotten hurt because they'd simply thrown too many pitches.

At that time, if you worked for a baseball team you probably did not have access to in-house, proprietary information. If you worked for a baseball team and you were desperate for some sort of guidance, any sort of guidance about pitch counts, Baseball Prospectus was just about your only easily accessible option. You could walk into a Barnes & Noble in Scottsdale, and boom there it was. SEVERE RISK.

I'm sure I've missed some things, and I hope you'll tell me some of them. But while I think we would have arrived where we're at now regardless, I suspect the sudden drop in 130-pitch outings in 2001 can be laid squarely at the feet of Rany Jazayerli and Keith Woolner, who gave baseball people the magic number they couldn't find (and still haven't found) for themselves. Because of course it doesn't exist.