2013 MLB Draft: The draftees worth rooting for

There will be almost 1,200 players drafted by the end of Saturday. Here are six worth rooting for.

Share All sharing options for: 2013 MLB Draft: The draftees worth rooting for

It's odd to look at a draft list and think that in a couple years, some of these players are going to be a huge part of the baseball world. One minute we're hearing Mike Trout's name for the first time, the next minute we're building mashed-potato sculptures of him.

Some of these players are going to shape the game over the next decade. I've picked a few, from the first two days of the latest draft, who I'm rooting for. Allow me to convince you to root for them, too.

Oh, not only because he's going to be pitching in Colorado Springs before he pitches in Coors Field. He's doomed because of that, sure. But also because he was picked #77. Do you know what a black hole that pick is? Here's a link. Keep your eyes on the WAR column. Scroll down until #77. Keeeeeep your eyes on the WAR column. Then you get there and fooooomp. Every last ounce of value is sucked into the collapsing star of that pick. The best #77 players ever drafted:

Scott Lewis pitched five games in the majors, and he's at #4. That's how much of a wasteland the #77 spot is. The pick before? Giancarlo Stanton and Marquis Grissom. The pick after? Steve Busby and Ryan Theriot. Fifty picks later? Mike Timlin, Marty Pattin, Kevin Correia, and Darwin Barney. But when it comes to pick #77, no light escapes.

This doesn't seem like it would make up for it because this Tommy Milone is an outfielder, while the A's Tommy Milone is a left-handed pitcher. But hold on a sec. According to this, Milone is the 15,558th most-common surname in America, with only 1,726 occurrences in the census. It's behind "Derryberry," "Waguespack," and "Chinchilla."

You'd notice a couple of Tom Derryberrys playing at the same time. Well, Tommy Milone is even rarer. And Jeff D'Amico? That's the 2,565th most common surname in America. Not a big deal as I thought.

At one point, Manea was slated to go high in the first round. He's a left-handed pitcher with size and a fastball that can get up to 95. As the season wore on, though, he lost velocity and came down with a hip injury. This pick hits two of my soft spots:

1. Pitchers whose bodies betray them when they're amateurs
2. Royals developing young pitchers

As in, this seems like a bad fit. A really, really bad fit. Manea is going to need some work, and if young pitchers are a Boeing 747, Royals generally take painter's tape and a corkscrew with them to make repairs. But I want that perception to be wrong and for the Royals to get some young pitching in the rotation. Manea could be the guy to do both.

It's obvious, right? Fukofuka. It has "F"s then vowels then "K"s. Usually … you know … I mean … that pattern appears in other places in our language …

And if he makes the majors, he'll be on the lips of four sets of broadcasters (home/away for TV and radio) for 162 games every year. That's almost 1,000 hours where we can listen in for FCC-terrorizing screw-ups. I've never missed Harry Caray more.

"Fukofuka fires to Freeman at first! Safe! Oh, boy, Fukafuka fired the ball into Freeman but Frazier was just too fast, and … what what'd i say why are you looking at me like that what oh god it happened again didn't it ..."

Drummond turns 24 in September, and he hasn't pitched in over a year because of eligibility snafus. He's transferred four times, which might mean he's got a touch of the Pierzynskis, or it might mean he's extraordinarily picky. Whatever the case, I'm sick of kids who were born after I graduated high school getting drafted.

Drummond is the same age as Chris Sale, Matt Moore, Tyler Chatwood, and Liam Hendricks, yet he's just starting his professional career. You don't see that too often. And I tend to root for the quirks in a game that doesn't stop surprising you.

The Astros drafted a 5'7" second baseman. 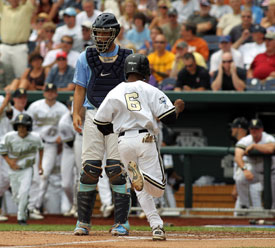 The Astros drafted a 5'7" second baseman.

Jose Altuve, knees crossed in meditation, sitting under a lotus tree, arms aloft, breathing deeply. He opens his eyes, jumps to his feet, and grabs a katana from the wall. "He is here," Altuve mutters.

I used to work in a seven-person office that was filled with super-tall bros. They were all athletes in great shape, and they could grow stubble by grunting for five seconds. But there were two short dorks -- me and Jorge. And Jorge hated me. He was there first, and he couldn't believe they hired a challenger to his status as the office's official dork mascot.