In 1994, two Texas high school football teams played out one of the greatest endings in the history of televised sports.

Share All sharing options for: 'I wanna throw up': Celebrating Plano East-John Tyler, the greatest sports video in YouTube history

In 2007, I watched "Plano East-John Tyler 1994 football" for the first time, and immediately decided it was the greatest video on YouTube. Six years later, I reckon that's still true. If you haven't seen it, then for the love of God, see it:

It's compelling, exciting, hilarious, endearing, tragic, and weird. It's also entirely self-contained, in that you do not need to know anything about either Plano East High or John Tyler High, and entirely raw, in that there are no interview cut-aways or Saliva's "Click Click Boom" drowning out the source audio. I've downloaded it in the contingency that it gets taken down or ruined someday. It's just too important.

Let's talk about it for a little while.

I. Perhaps the most startling comeback in modern football history. 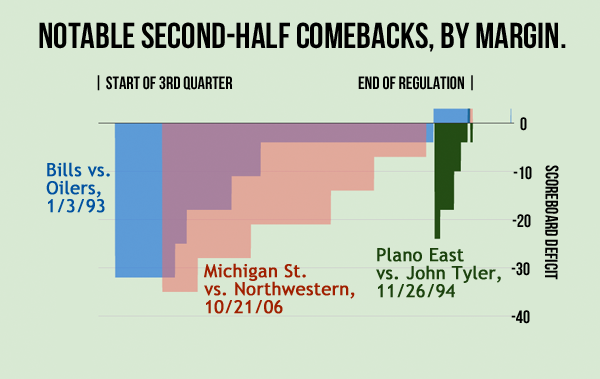 As stacked against what are arguably the most striking NFL and college football comebacks of all time, Plano East had a slightly smaller hole out of which to climb -- the Bills, at their greatest deficit, trailed by 35 points, and Michigan State by 32. The pace of Plano East's comeback is staggering, not only due to the vast improbability of recovering three consecutive onside kicks, but because the Panthers' offense had little opportunity to rest.

It helped me to imagine the three slopes on this chart as hills I'd have to scale. The other two comebacks are solid uphill walks, to be sure. But Plano East's comeback looks more like scaling the face of a mountain. It must have been exhausting ...

II. ... because the offense was so damn fast.

This wheelchair is moving at 0.4 miles per hour, which is the real-world speed of an average NFL offense while the game clock is moving. This takes into account all the time the offense is on the sidelines and not moving at all.

Consider how physically exhausting that rate of movement can be for an NFL offense, and then look at this.

This man is walking at three miles per hour, the approximate speed of Plano East's offense as they raced to put 27 points on the board. They gained 219 yards within that 2:36, making them about seven times as fast as their average NFL counterparts. Consider that these are high school athletes, and that they accelerated to this pace in the fourth quarter, not the first. They'd been out there for hours.

The precise odds of a properly executed onside kick and recovery in high school football are basically unknowable, but at Advanced NFL Stats, Brian Burke found that if an NFL receiving team is expecting an onside kick, the success rate of the kicking team is about 20 percent. With those odds, the probability of succeeding three times in a row is about 0.8 percent.

While it's probably true that a high school special teams unit isn't great at receiving an onside kick, it's also important to point out that Plano East's kicker was also its wide receiver, Terrance Green. The Panthers' starting kicker had been booted off the team, and if Green had any practice at all with onside-kicking, it surely wasn't much.

Green's first effort went a little further than it should have, but Plano East lucked out when John Tyler fumbled. No diss, because onside kicks are largely about luck anyway.

Green showed some skill in the second kick, striking the top of the ball to keep it low to the ground.

When the sport of football was born, the ball was completely round; it slowly evolved into something more oblong as decades passed. It seems reasonable to assume that this was in order to make the ball easier to throw, but I prefer to imagine that they wanted a ball that bounced at unpredictable angles and essentially turned special-teams units into 22-legged drunken spiders.

That third bounce -- the one in which the ball suddenly shoots five feet in the air -- initially led me to believe that a player had kicked it or struck it somehow. So I slowed it down ...

... nope. What about that second bounce suggests to you that the third bounce is going to spring the ball into the air like that? I don't get it. But it bounced, untampered-with, and Plano East kept possession.

The third attempt takes a bounce that pretty clearly favors John Tyler -- it rockets straight out on the bounce, and seems headed for No. 5's way.

And then his teammate lunges in front of him, takes a stab at the ball, and ends up deflecting it right into the hands of Plano East's No. 21. I find no fault in that nameless teenager. I'd imagine that after those first two onside kicks, a coach was screaming the fear of God into the special teams unit on the John Tyler sideline. If that guy had to rip off his helmet and throw it at the ball, he probably would have.

IV. The announcers are somewhat excitable. 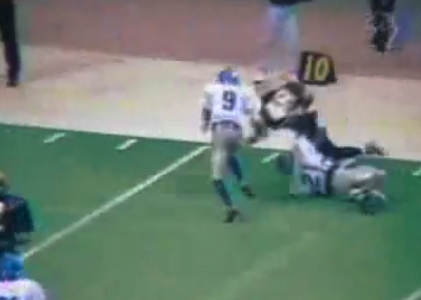 In the end zone.

- Announcer, at the exact moment of the above screenshot 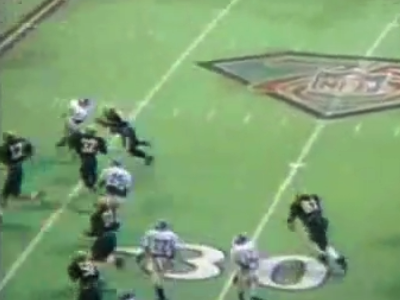 - Announcer, once again, at the exact moment of the above screenshot

V. The roles of the gentlemen in the booth are perhaps not as clearly defined as they could be.

Their names are Eddy Clinton, Denny Garver, and Mike Zoffuto, though it's rarely easy to tell who's saying what. On paper, they were probably a play-by-play man, a color man, and a guest analyst. As the game avalanched into an all-time classic, these roles sort of disappeared. They were just "three guys in a booth."

At points, they sounded like an a cappella outfit, only instead of a baritone and a tenor, they had "guy who says something" and "guy who says the exact same thing a second later."

The way in which they merge into a single voice and consciousness is sort of beautiful.

Let's take one more ride on that roller coaster.

Plano East should have made the tackle around the 20-yard line. No. 42 had fallen off-camera; we don't know whether he was pushed or simply slipped. Even still, two defenders were stationed at the 20, and both appear to have been caught flat-footed. I can't blame them. They were exhausted kids, taking the final few steps of a grand epic under the lights of an NFL stadium.

Terrance Green -- again, a wide receiver -- booted an NFL-caliber kickoff; he did the best he could with the orders he was given. His coach clearly should have told him to squib the kick, but he went conventional, and in so doing he helped create one of the greatest on-field stories in the history of sports.

way to get rid of the football,

Break out the Oreos

Come on no, no