"You think it's about the penis, but it's not." SB Nation checks out a new Broadway show involving Kenny Anderson, Chris Gatling and others talking about their male parts.

NEW YORK -- Kenny Anderson looked me in the eye and told me he sometimes wished he didn't have a penis. He'd repeat the line a couple hours later in front of 40 or 50 people, appending a last-second "almost" to make sure the giggling crowd knew where he came down on the penis/no-penis question.

A lot of what Anderson said to me during the "cocktail hour" preceding Penis Monologues felt like rehearsal. I had asked Anderson -- and this was the only planned question I asked him -- how much he'd rehearsed for the show, and he explained that the performance was to be more interview and improv than a true play. Anderson then began to share, with voice low and drink in hand, an unsolicited series of personal headlines -- some sordid, some sad, some actual newspaper headlines.

He named each of the seven children he has with five women. (One of whom is Deidra "DJ Spinderella" Roper, formerly of Salt-n-Pepa. This came up so offhandedly that I had to look it up to make sure). He told me he suffers from a mild form of dyslexia. He winced while explaining how he got fired months ago from his coaching job at a Jewish day school in Florida because of a DUI arrest. I was impressed and a bit taken aback to hear such unsolicited candor from a famous person I'd just met, but later wondered if our exchange was the dry run Anderson needed to work up some courage. 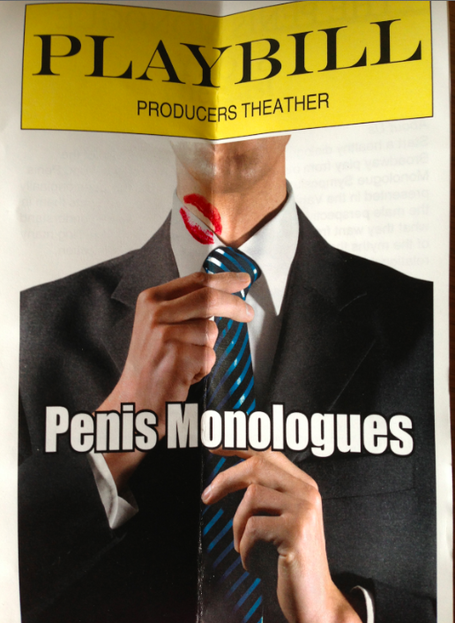 Anderson, a high school legend, 14-year pro, and one-time All-Star, was one of five men -- three of them former NBA players -- on stage for Penis Monologues (or, depending where you look, The Penis Monologue or Penis Monologue Symposium) at the Producers' Club's Crown Theater in New York Sunday night. Alongside him sat Chris Gatling, 11-year journeyman and one-time All-Star; Tate George, a four-year pro and maker of one of the most legendary shots in UConn history (the website had promised Anthony Mason, but nope: Tate George); Joe Brown, former agent and longtime associate of all the above; and "Detroit" Dan Bowman, a very amiable, increasingly drunk South Florida epoxy flooring magnate and former Blind Date contestant whose reasons for being included perplexed nearly everyone, him most of all.

Bowman's involvement clearly made perfect sense to Brown, the easy, grinning businessman who created the show. Drawing inspiration from a trip to see The Vagina Monologues decades prior and symposium-style interviews with one thousand (his number) women in the intervening years, the sports agent/car dealer/equity manager/motivational speaker/author/screenwriter/playwright sought not only to rewrite the production for males, but to champion women's rights, provide role modeling for young men, build cancer awareness, promote better relationships and generally elevate the public discourse in the process -- all while raising money for charity.

It came as no surprise that a man so brazenly enthusiastic saw no issue with adding Bowman to a cast of former NBA stars, just as he saw no issue with opening the show with the full recording of Chuck Berry's "My Ding-a-ling," or letting his teenaged sons run the show's audiovisual component, or using a PowerPoint of Google images and YouTube embeds as a backdrop. The first run was as slipshod as the project was unabashedly ambitious. This was, after all, a soft opening -- a trial run for a group of 50-odd friends and family that only included yours truly because Brown had been kind enough to call and invite me after I'd puzzled aloud over the show's website a week prior.

Brown's production, or at least this first shot at it, proved to be more like the panel format Anderson suggested -- largely unscripted, interactive with the audience -- than the "Broadway Play" advertised online. The show's first "act" saw Brown lead the three stars on stage one at a time, introducing them with a bit of personal history -- he knew each of them well before they hit the league, as agents generally do -- plus a couple projected highlight clips and at least one reference to recent personal or legal troubles. He then guided them through a discussion of their upbringings, their paths to fame and fortune, and the pitfalls along the way.

Anderson offered an alternately silly and somber take on his failure -- in his mind -- to fulfill teenage promise as the Next Great New York City Point Guard "only due to the lifestyle" enjoyed once he turned pro. He explained how origins in an impoverished, single-mother household both motivated him to succeed and left him poorly equipped for manhood and fatherhood. He spoke frankly and with some levity about excessive carousing, sleeping around (there was a tale of entertaining several women on several floors of the same hotel), excessive gifts for everyone from family to friends to relatively strange women and his notorious car collection. (There was a tale of painstakingly pulling 10 parked cars out of the way only to find that the 11th's battery was dead because it hadn't been driven in months). He grimaced when revealing dark childhood secrets and choked back tears while addressing a projected clip from Basketball Wives of his second wife and estranged daughters grilling him in a group therapy setting.

They chuckled a bit about sex, parties and the game itself, but mostly sought to release and educate.

Gatling and George occupied less of the first act, but took time to share some childhood stories (in particular, the tale of Gatling's multiple brain surgeries following an accident) and note their recent legal troubles -- Gatling's squatting accusation and George's alleged involvement in a Ponzi scheme -- as regrettable mistakes now behind them. They chuckled a bit about sex, parties and the game itself, but mostly sought to release and educate. The whole thing allowed the players to disinter some inner demons -- Anderson described it as "therapeutic" -- answer for some post-retirement troubles, and practice a bit for further, more calculated entries into the public eye (both Anderson and Gatling are working on books).

The first act was engrossing and at times genuinely moving, and its broad scope spoke to Brown's grand, scattered ambitions for the production. Fascinating, all told, but not what I came for. I was there because a show featuring NBA stars of my youth was called Penis Monologues, and, well, I'm glad I stayed for the second act. A first half containing only sparse, forced forays into phallic matters segued into a brief intermission so the stars could drink down a little more courage. Gatling took this opportunity to tease his book to me with mention of a story involving Latrell Sprewell and missing shoes in a European brothel. The intermission eventually gave way to a couple hours of straight dick talk. 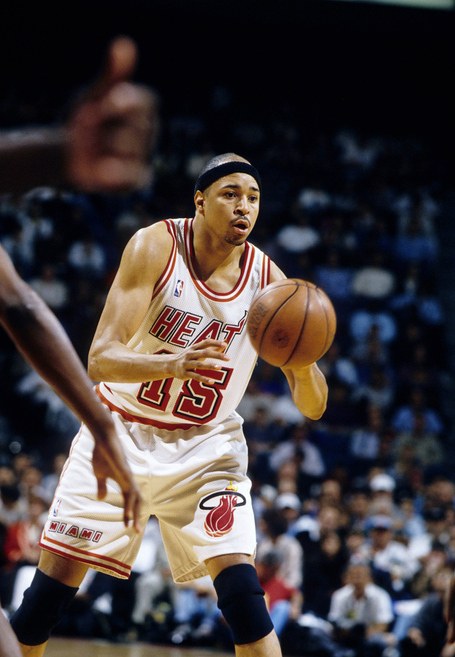 Chris Gatling as a member of the heat. USA TODAY Sports

We were soon ushered back into the theater, where the stars retook their seats in front of a giant, uncomfortably close-up image of a shriveled micropenis bearing the caption "Size Matters." So, yeah: time for the penis monologues.

We were soon ushered back into the theater, where the stars retook their seats in front of a giant, uncomfortably close-up image of a shriveled micropenis bearing the caption "Size Matters."

On another slide entitled "Political Penis," Brown -- a more involved discussion leader than he had been in the first act -- wondered if perhaps there should be someone in every political cabinet and NBA team tasked with making sure the top decision-makers (male or female) are sexually satisfied. The group argued over whether or not sexual contentment influenced performance in the workplace and whether such assistants are already in use. Gatling pointed out "well, there are cheerleaders," and everyone agreed he was far more interested in NBA dancers than the rest of the panel was.

Another slide introduced the topic of rectal examinations with a large photo of a man's screaming face in profile. Anderson mentioned that he'd abruptly aborted his first such appointment after almost passing out at first contact. Nobody seemed to mind when a nurse in the audience interrupted the conversation to insist that every man over 40 get a colonoscopy and rectal exam. George offered, jokingly, to accompany Anderson to his next proctology visit.

A slide about "The Pill" wasn't, as I initially thought, about oral contraceptives, but rather erectile dysfunction drugs. Anderson sung the praises of Cialis. Gatling recounted the first time he took a Viagra -- scored off the same friend from before, still grinning and nodding at my side -- and panicked over his rapidly-beating heart and loss of breath. George claimed to prefer creams and the like.

The topic of "Gold Diggers" drew a lot of shaking heads and sheepish, floor-ward gazes. Both Anderson and Gatling owned up to impregnating at least one woman that wanted only to reap the benefits of partnership (Billy Owens and Chris Webber are apparently the guys to ask about that night for Gatling). Brown recalled negotiating gifts and regular payments for the women involved. Stories were exchanged about receiving paternity papers so regularly that the players devised tactics for dodging the servers.

1. The men all have penises and owe some of life's trials and missteps to said penises (Anderson: "My penis got me in a lot of bullshit." Gatling at one point gestured toward his crotch and bellowed "WHY'D YOU DO THAT?").

2. Sex should be an equal-opportunity, equal-enjoyment exchange.

3. The men have had a whole lot of sex in their lives, though only Bowman offered an estimated partner tally (1,000!).

And that was that. 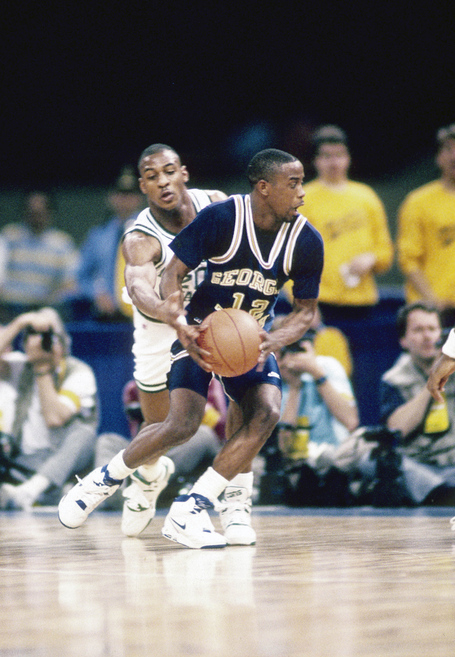 The Penis Monologues opening was, in total, a rambling spectacle of a little over three hours, split evenly between men discussing their bountiful, treacherous paths through NBA stardom and men discussing their penises' parallel bountiful, treacherous paths through NBA stardom. For retired pros in their 40s, it was an early exercise in a special kind of public speaking: honest, vulnerable and undiluted.

For retired pros in their 40s, it was an early exercise in a special kind of public speaking: honest, vulnerable and undiluted.

The way Brown put it, such an exercise was worthwhile for men in these players' positions. After decades spent capitalizing on physical gifts, one of the greatest assets Anderson, Gatling and George now possess is experience. They each have a head full of stories and unusual wisdom, and Brown repeatedly emphasized the value each could have as individuals willing to release some demons, unearth a bit of dirt and offer frank advice to those following them. Sunday night certainly wasn't the first time the men had spoken in public, but it had to be the most open such occasion. I'd be very surprised if Kenny Anderson has previously uttered the phrase "money spent recklessly just to come" in a public setting.

And what better starting point for such nascent candor than some dick talk? What topic could be barer and more vulnerable than that of penises? The genital-based banter, playful as it often was, served as a gateway for men not necessarily accustomed to such open introspection. "You think it's about the penis," Brown said during the first act. "But it's not."