While Andrew Wiggins, Julius Randle and Jabari Parker get all the attention, there's an Australian prospect named Dante Exum that could be better than all of them.

There were three familiar names in the semifinals of the U19 world championships: the United States, Serbia and Lithuania. The outlier was Australia, whose basketball team has never medaled in a significant international competition. The difference was Dante Exum, a 17-year-old who led the Boomers in points, assists and steals and was third in rebounds. Exum had been considering college, but that may change after his dominant performance in Prague.

Exum is the son of Cecil Exum, an American who played at UNC in the early 1980s before a professional career in Australia. Dante, his oldest son, is a product of the Australian Institute of Sport, a year-round academy dedicated to producing Olympic athletes. In that sense, he is the best of both worlds, a fundamentally-sound international player with American-type athleticism. Unlike Monta Ellis, he really does have it all.

At 6'6 and 190 pounds with a 6'9 wingspan, Exum has elite size and athleticism for a combo guard. He's a smooth player with a lightning-quick first step who gets wherever he wants to go on the floor fairly easily. It's essentially impossible to stay in front of him in the open court. In the championship rounds, neither the Spanish nor the Serbians had any answer for him athletically. Team defense was their only chance to contain him.

The ability to play within a team concept, though, is what makes Exum special. Most players with his physical tools don't have his feel for the game. He often brought the ball up himself, initiating the Australian offense. Exum isn't a pure point guard, but he understands how to draw double teams and find the open man. He played within himself at the U19s, rarely forcing the action despite being far more talented than his teammates. 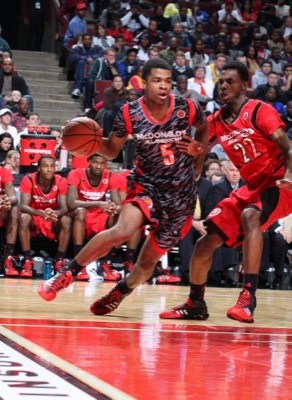 Because it's never too early to look ahead, here are Jonathan Tjarks' top 30 prospects in the 2014 NBA Draft

In eight games in Prague, Exum averaged 18 points, four rebounds and four assists on 45 percent shooting from the field, 33 percent from three-point range and 61 percent from the free-throw line. Like most young guards, he needs to continue refining his ball-handling and shooting, but all the tools are there. You would like to see how his statistics hold up over the course of a full season, but he has shown the ability to score, shoot, pass, rebound and defend. He was on the U19 All-Tournament Team despite being one of the younger players in the field.

Exum also had a strong showing at the Nike Hoop Summit in May, which pits the top U19 international players against the best American high schoolers. He was one of the best players on a team that featured three 2013 first-round picks (Sergey Karasev, Dennis Schroeder and Livio Jean-Charles) as well as Andrew Wiggins. In 23 minutes, Exum had 16 points, three rebounds, two assists and two steals on 6-8 shooting in a 112-98 victory.

Before the Hoop Summit and the U19s, Exum was expected to follow the path of other AIS graduates (Andrew Bogut, Patty Mills) and attend a US college. He graduates in November, which would make him eligible to play in the spring semester. Every big school in the country, including Kentucky, Louisville, Indiana and Duke, is after him. But while Exum could be the final piece of the puzzle for an NCAA team, he no longer needs the exposure to NBA scouts. If he goes to college, he won't be eligible until the 2015 draft.

This summer, he'll go to training camp for the Australian national team. They play New Zealand in August in a pair of qualifiers for the 2014 World Championships, although both countries automatically make the field as the only two teams in FIBA Oceania. There are a couple of familiar names (Mills, Aron Baynes, David Andersen) on the Boomers national team, but since I haven't heard of most of them, I'd assume Exum can make the cut.

From there, he could go to college or stay in Australia and prepare for the 2014 draft. To succeed in the NBA, he'll need to become stronger and more polished, what you would expect for someone turning 18 this week. Given his frame, he should be able to add 10-15 pounds of muscle over the next few years. If he does go to the NCAA, I'd like to see him run point full-time. More reps as a primary ball-handler and decision-maker against high-level competition can only improve his game.

Whatever Exum decides to do, the sky is the limit. For the most part, the very best basketball players all have elite size and athleticism for their position and the skill-set to attack a defense in multiple ways. Exum has all those things. As cliche as it sounds, he can be as good as he wants to be. When he's 25, he could be one of the best players in the world.

Even in a draft as strong as 2014, it won't take long for his name to come off the board.