The ghost racetrack of Goodyear, Arizona

Phoenix Trotting Park was open for about two years, nearly fifty years ago. Since then, it's just been sitting there in the desert outside Phoenix, looking spooky.

Share All sharing options for: The ghost racetrack of Goodyear, Arizona

In the (very interesting, unsurprisingly sad) documentary Detropia, a Detroit native and barista named Crystal Starr serves a pair of Scandinavian tourists who have come to her hometown to wander through and take photos of the sprawling apocalypse of its ruins. They tell her as much, without much evident sense that this might be a painful thing to hear for someone who grew up and lives in the still-living city whose civic gangrene they've come to feel complicated aesthetic feelings about. She mentions to one of the tourists that his glasses remind her of Harry Potter, and he takes offense. People are complicated, is all, and so is our compulsion to look at urban decay.

Detroit, in most every way, is a unique case: its ruins are fresher and larger, and the time of glory is not really very far in the past at all, but mostly there's just the sense that they shouldn't be there, that this was all somehow preventable. Surely someone at some time thought this about the Acropolis or Stonehenge, too, I guess, but -- regardless of the regard in which you might hold manufacturers who move operations to cheaper, non-union places -- no barbarian hordes have sacked Detroit. There's no reason this had to happen; the persistence of a smaller but still vital civic life in Detroit is proof of that. This is the hardest sort of ruin to look at, and the saddest. So thank goodness, then, for the Phoenix Trotting Park, in Goodyear, Arizona. 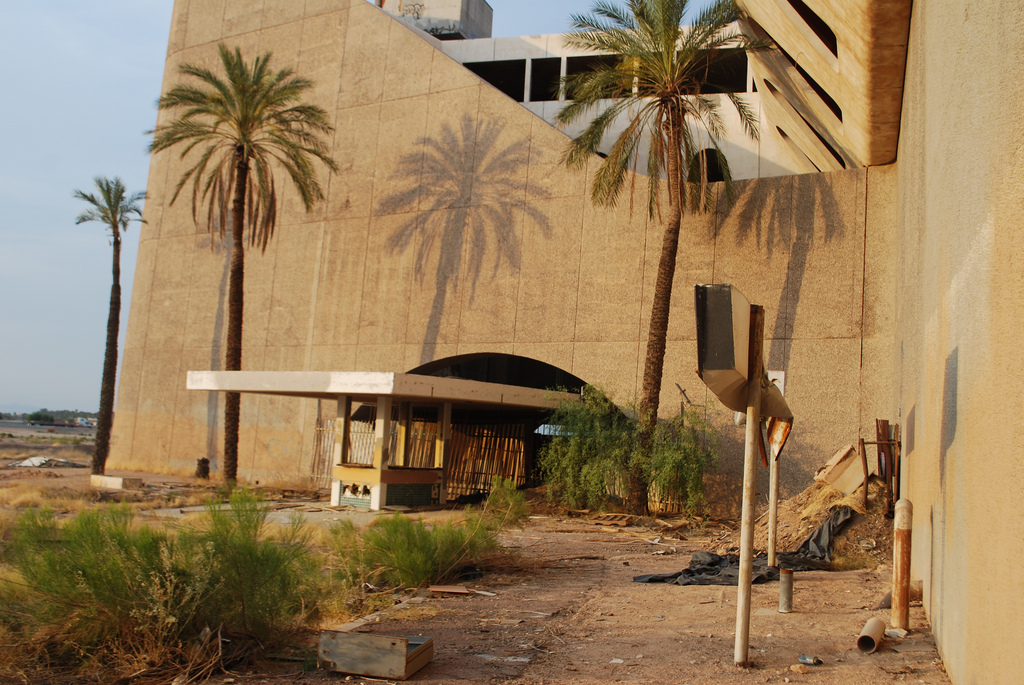 Because here is a sports-ruin that makes sense. It was always and remains a terrible idea to open a horse-racing facility in the middle of the Arizona desert. It's a bad idea because it's too hot virtually all the time for both people and horses, and because the area also floods frequently, and because it's too expensive to keep up a place that clearly wants, in some deep desert-y way, to be desert. Also, per this history of the place, there were at the time of Phoenix Trotting Park's 1965 opening very few roads linking it to Phoenix, 20 miles away. This was presumably still true when the place closed in December of 1966. It cost $10 million to build -- more than three times the initial estimate -- and was open for less than two years. And since then, it has sat by the road, being spooky.

It's not exactly a secret -- it's highly visible from I-10, and the town of Goodyear even lists it on its webpage under "attractions" -- but it's not open to the public, either. So, technically, the photographer Petrona Kral Zickgraf was trespassing when she entered the park and took these photos of the 47-year-old ruin. It's a good thing she did, since the photos -- part Ghost-Ridden Tatooine Sex Resort, part futuro-desert literalization of human folly and idiot overreach -- are totally beguiling and, as photos of ruins go, relatively guilt free. This is not a living American city that's simultaneously half dead. It's a giant tan Jetsonian mausoleum built in the middle of a desert to host harness racing, without any apparent regard for how flagrantly dumb and doomed it would be to do something like that.

Zickgraf told me that she sees what she does as a sort of service. "To me," she wrote, "recording their existence via photography gives them a continued purpose, so they aren't really gone and forgotten." This is one way to look at it, and a reasonable one. But if part of the reason we look at ruins is a dark one centering on our human-ness -- everything ends, all is vanity, so uplifitingly on -- we also do it because nature devouring big empty things looks cool. The proximity and obviousness of the human cost to Detroit's collapse is a big part of what makes the Motor City's decay-tourism feel so callous and ugly. But this is a ruin that was kind of asking for it all along, and is finally just what it is. It's a relief, in that way, and it looks pretty cool, too.