Forced to sit out in his only college season, Dallas Mavericks second-round pick Ricky Ledo has been waiting a year to showcase the skills he displayed in the team's Summer League debut Saturday.

Share All sharing options for: NBA Summer League: Ricky Ledo finally gets his chance to play

LAS VEGAS -- When Ricky Ledo stepped onto the court in the Cox Pavilion Saturday, he was doing so in an organized game for the first time in over a year.

After emerging from high school as one of the top recruits in the country, the Dallas Mavericks' second-round pick was deemed academically ineligible for his freshman season at Providence. Despite not playing a single game in college, Ledo declared for the 2013 NBA Draft and was projected by some experts to be a potential first-round pick. Some would find it absurd for a team to invest that high of a draft pick in a guy who has been unable to prove himself against legitimate competition and has his own various off-court issues, but a player as talented as Ledo is hard to pass up.

Of course, every team ended up passing on him in the first round. Forty-two picks passed before Adam Silver called his name and Ledo found out he was headed to the Mavericks.

Without the chance to showcase his talents in game situations, Ledo came into this year's Summer League as something like an abstract idea rather than known quantity. Standing 6'6 with crazy long arms and tremendous athleticism, Ledo certainly looks the part of an NBA player. But his ability to apply his talent to a game against other NBA players will likely determine whether or not he sticks on the Mavs' roster. 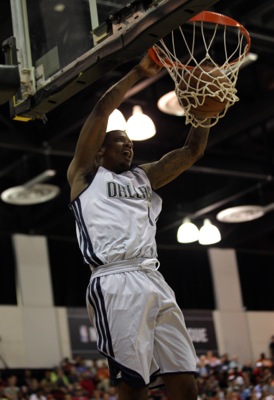 Mavs Moneyball explains why Ricky Ledo is the key to the team's draft.

In the Mavericks' first Summer League game against the Sacramento Kings, Ledo had his first opportunity to show what he can do. Ledo recognizes that it's going to take a little while to get used to playing live games again, but feels as though he took an important first step forward on Saturday:

"The first half was a little adjustment; in the second half I got into a groove a little. I think overall it went well after my first time back on the court in a year," he said afterwards.

When asked if sliding to No. 43 in the draft gave him a chip on his shoulder, Ledo sort of deflected the question and instead focused on how excited he is to be back on the court.

"I look forward to playing better as the games go along," he said. "This was my first action in a long while, so I'm just happy to play the game again."

Ledo came off the bench in his Summer League debut, but played 22 solid minutes. He had an efficient nine points on 4-of-5 shooting, showing off his ability to score from virtually anywhere on the court. He displayed great balance on his jump shots and a tight handle as he weaved around defenders.

"I think he can be really good coming off screens, off the ball," Mavericks Summer League coach Monte Mathis said. "He does a good job of changing his speed off the ball, getting open coming off pindowns and staggers, things like that. But he's also a guy who can get his own shot if he's in an iso situation."

One thing's for sure: the talent is there. Harnessing that talent and helping Ledo get the most out of it is a task that the Mavericks' coaching staff seems prepared to undertake. It will be a process, but Mathis is encouraged thus far:

"He's going to be learning every single day. He's trying to learn the college game and then learn the NBA game as well. He's a guy that we've just got to bring along, keep teaching, keep learning -- specifically defensively, off the ball, help defense," he said. "But he's a sponge right now. He's got a great demeanor and he's coachable -- he's easy to coach."

Ledo's combination of size, ball-handling and shooting make him an extremely intriguing offensive talent, but it's on the defensive end where Mathis sees the most versatility:

"On the ball he's going to be much better to start off now than he is off the ball with defensive schemes and help defense and all those types of situations. But we put him on point guards a few times because of his length and he did a good job," Mathis said.

Given his physical gifts, Ledo's ceiling as a prospect could be extremely high. At the same time, Mathis knows that it's going to require constant work and a willingness to learn if he's ever going to fulfill his potential.

"One thing that Ricky has is instincts. He's got great instincts on both sides of the ball. He's just got to learn to slow himself down, read the defense and take what they give him," he said.

Whether or not Ledo ever lives up to his reputation as one of the top recruits coming out of high school is likely up to him. He's had his fair share of issues off the court, but a willingness to learn and a newfound appreciation for the game might be just what he needs to have a successful career in the NBA.

• Kirilenko: I couldn't pass on chance to win in Brooklyn

• Players to watch at the Vegas Summer League