Figuring out the Inside the Park Home Run Derby

How would it work? Why would we even attempt it? What's wrong with us?

Share All sharing options for: Figuring out the Inside the Park Home Run Derby

The Home Run Derby is stupid and you are stupid for watching it and I am stupid for wanting to watch it. Have I even missed one over the last 10 years? So stupid.

There are all sorts of ways the Derby could be improved, of course. Just ask someone, they'll tell you. Suggestions range from "Not having it" to "Not televising it," though I'm partial to something like a Double Dare obstacle course. Hide the baseball in a gigantic nose with fake boogers, and make David Wright have to find it before he can hit it over the fence.

You would watch. You would watch. Also, give the division with the winner automatic home-field advantage in the NLCS. Because that would also make people watch who normally wouldn't. Or something.

Unfortunately, that's absurd. As much as I'd like to see a little more American Gladiators or Double Dare in the Home Run Derby, it's probably doing just fine as is. My e-mails to Bud Selig have gone unanswered.

Ah, but there's no real way to guarantee there would be even one inside-the-parker unless the deck were stacked. So let's spitball some ideas, friend. How could an Inside the Park Home Run Derby work?

Idea #1: Two on two
Brett Gardner and Peter Bourjos on the AL team. Juan Pierre and Carlos Gomez on the NL team. When one team is up , the other team is in the field. The two-outfielder setup would allow for all sorts of chicanery and hopefully more than a few inside-the-parkers.

You can't expect the hitter to run out every ball, of course. Maybe make it so that when they leave the box, their at-bat becomes official. The other team has to retrieve the ball and throw it home before the runner gets there. Easy enough. The rest of the details -- how many outs/rounds/etc... -- aren't as important. But a two-on-two setup could work.

Idea #2: Kids
I googled "inside the park home run derby" to make sure this idea hadn't been done a million times. It hadn't. Maybe a hundred. But one of the earlier ones came from Jon Weisman of Dodger Thoughts, who passes along this suggestion:

Eight kids from around the U.S. are chosen as fielders. Put an age limit on it -- ten? Twelve? Point being, these are kids. (Pitcher remains a batting practice pitcher.)

Major Leaguers hit long fly balls and then run the bases. He must keep running until he crosses home plate. Kids field and try to tag him out. Major Leaguer gets five outs.

Each time around the basepaths, one presumes, he would get slower and slower, increasing the chances of running out of gas…

Even better: If home-plate collisions are both allowed and encouraged. Because kids these days are soft. What with the video games and such. But this would be an interesting twist, at least, preserving the basics of baseball while still highlighting the players' natural speed and warning-track power.

Idea #3: Fat and/or slow outfielders
Well, the official name would be something different. But again, this would help preserve the general balance of baseball, at least. An outfield of Prince Fielder, Pablo Sandoval, and Yadier Molina. Or Barry Bonds, George Brett, and George Foster. Put three people in the outfield who shouldn't be in the outfield, then let the fast guys tucker them out with line drives into the gap.

The only problem is that no one would volunteer for this job. "Hey, we would be honored if you would be the fat or old outfielder for this amusing thing we're doing." So maybe it would have to be something of a punishment. Maybe part of a performance-enhancing-drug punishment. That could mean an outfield of Bartolo Colon, Yasmani Grandal, and Carlos Ruiz this year, for example. So the Inside the Park Home Run Derby would be Bartolo Colon running around the outfield while fast people do fast things on the bases.

You would watch that, and then you would buy the Blu-ray even if you didn't have a Blu-ray player. You would just spin the Blu-Ray on your finger, and look at your reflection wistfully, wishing you were watching Bartolo Colon running around the outfield as punishment for a PED violation.

Probably the least plausible idea, this one would put a three-man outfield out there, but there would be obstacles for the fielders to navigate: 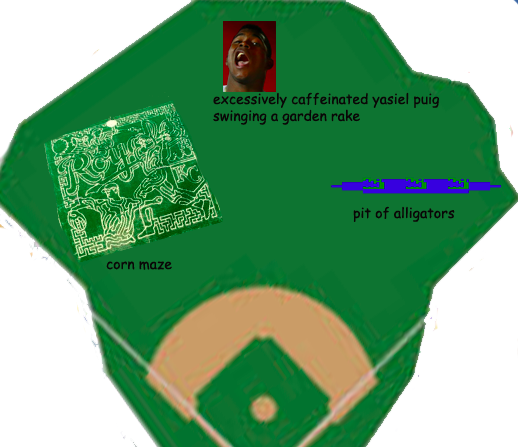 Something like that, with the options being deadlier or less deadlier at Bud Selig's discretion. Possibly a series of low hurdles or fences. Maybe just a bunch of flagpoles and hills in the outfield. Works for Houston.

Idea #5: Crazy temporary walls
Put temporary, 50-foot-high walls in the outfield that have crazy angles. Have batting practice as normal. This probably wouldn't work in the site where the All-Star Game was being held. Too much work to get the walls up and down.

Aw, heck, who am I kidding? None of this would work. We're never going to get an Inside the Park Home Run Derby.

(But I vote for fat guys. Bartolo Colon in the outfield, everybody.)