Robert Sacre's rookie season was unlike any other

To most people, the 2012-13 Los Angeles Lakers season was a train wreck. To second-round rookie Robert Sacre, it was a rollercoaster that he was thankful for experiencing once it was all over.

Share All sharing options for: Robert Sacre's rookie season was unlike any other

LAS VEGAS - "Anything can happen, the NBA is crazy," Robert Sacre says.

He speaks from experience. Sure, he's only played 32 games in the league. But as a supporting cast member in the wackiest show in basketball last season, the Los Angeles Lakers center lived through more plot twists as a rookie than anyone could have predicted.

Upon signing his contract for 2013-2014 with the Lakers last week, Sacre told reporters he'd "definitely seen more in one year than most guys have in five."

It's fair to call Los Angeles' 2012-2013 campaign a failure for Kobe Bryant, Dwight Howard, Pau Gasol and Steve Nash. For Sacre, it was anything but. Reflecting on the beginnings of his professional career from UNLV's Cox Pavillion at the NBA Summer League, Sacre sounds thankful for the "millions of ups and downs" he's already had in Los Angeles. The 60th overall pick in the 2012 draft says he remembers being selected by the Lakers like it was yesterday. He's privileged to be there and has "grown tremendously" since joining the team.

Catching up with CDR 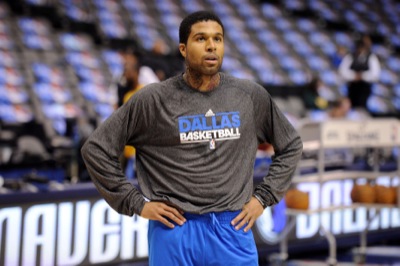 The Lakers hopeful discusses Kobe Bryant's recovery and his hopes of making the Lakers' roster.

More than anything else, he's good-humored, which serves him well. His personality is reminiscent of a young Howard, except with the complete lack of expectations that comes with being the last pick rather than the first.

A year ago, Sacre battled in Vegas and earned a deal to be the Lakers' bruising backup center. Heading into training camp surrounded by superstars, you'd have thought his season would have been straightfoward: compete hard in practice, cheer his teammates on and learn from the veterans as the wins piled up.

He found out quickly, though, that these Lakers wouldn't follow anything resembling a normal script. With Dwight Howard recovering from back surgery, Sacre's first exhibition game was unforgettable.

"It's wild," he says. "I walk out and they said I was starting and I look around, I got Pau, Kobe, Nash and Metta [World Peace] all behind me, and I'm going up for the jump ball. It was a dream come true, to be honest."

That was October 7, and this still seemed like a dream roster. Exactly a month later, Mike Brown would coach his final game for the Lakers. They went 0-8 in the preseason and started the regular season 1-4 before Brown and the Princeton offense were abruptly shown the door. Bryant and Howard had to sit out much of the preseason, Nash fractured his leg in his second game and missed seven weeks while backup point guard Steve Blake missed months with an abdominal injury. Then backup power forward Jordan Hill's season ended in early January thanks to a hip injury.

That was actually legitimately crazy. It was a unique year, man. -Robert Sacre on the Lakers' season

"That's when it was like, ‘What's going on?'" says Sacre. "That was actually legitimately crazy. It was a unique year, man. Just all the weird injuries, and no one being healthy. It was tough."

The Lakers assigned Sacre to the D-League on January 5, then recalled him two days later after Hill's injury. With Pau Gasol recovering from a concussion, Sacre started the next three games for the Lakers. Minutes were sporadic from then on, so he couldn't do much but watch everything unfold, joke with reporters and play hard when called upon. The team never really got healthy or in rhythm under Mike D'Antoni, falling to eight games below .500 and then fighting desperately just to make the playoffs before an embarrassing sweep at the hands of the Spurs. Going through dreadful losing streaks and a miraculous run to the playoffs in a major market was like a sampler platter of NBA experiences.

The enduring image from the 2012-2013 Lakers will be Bryant hitting two free throws after tearing his Achilles in their third-to-last game of the regular season and then hobbling to the sideline.

In between the preseason hype and postseason disaster, there was always something next for the Lakers. For any rookie, a big part of the job is learning how to roll with the punches, take setbacks in stride and make the most of the opportunities that present themselves. There's no way to completely prepare for the new level of competition and the lifestyle. For Sacre with the Lakers, this unpredictability was taken to an extreme. There was always another injury or another report of locker room friction. There was D'Antoni benching Gasol, there was World Peace repeatedly telling reporters "I'm too sexy for my cat" when asked how he returned from injury far ahead of schedule.

Most of the time, being a Laker last year meant witnessing the full, grim reach of Murphy's Law. It meant watching some of the sharpest minds in the game struggle to navigate through the muck. It meant high expectations, low moments and constant commotion.

If and when his name is called next season, Sacre will be ready. ‘Anything can happen' isn't just a throwaway adage. It's life as he knows it in the NBA.