Jonas Valanciunas continues on the track to stardom

The development of Valanciunas continues in earnest in Toronto, as the Raptors keep finding new ways to test their 2011 No. 5 draft pick in Summer League.

Share All sharing options for: Jonas Valanciunas continues on the track to stardom

LAS VEGAS - Big guys can drive general managers crazy. Until someone finds out how to genetically engineer seven-footers, you'll have to pay a premium to acquire prized ones. You'll have to draft them high when they're raw and invest in them. You'll tolerate a degree of zaniness, immaturity or combustibility if you think they'll be able to help on the inside.

The list of center prospects who have been selected in the lottery and flamed out is disproportionately long. There are also a number of All-Star big men who needed a few years to adjust to the NBA's speed and physicality. Teams will take fliers on those who have failed elsewhere, and before that they'll do everything in their power to get to know these guys early to figure out how good they want to be.

"We say a lot of big guys are pushed to play because they're tall and sometimes that's a big question," Toronto Raptors general manager Masai Ujiri tells SB Nation.

Ujiri is speaking from a position of strength on the matter. When he took over the Raptors in late May, Ujiri inherited an honest-to-goodness starting-caliber 21-year-old seven-footer with star potential.

He's giving all the effort, he never complains, he never really bitches.-Masai Ujiri on Jonas Valanciunas

"With Jonas, it's never a question. He loves to play the game and that's huge," Ujiri says. "He works hard, you don't have to tell him twice. He's giving all the effort, he never complains, he never really bitches. It's all about basketball and that's great to see."

Ujiri was running the Denver Nuggets during Valanciunas' rookie season last year, but it's not as if he had lots to learn about the Lithuanian upon his arrival.

"I know him from head to toe, I think, and I love him," Ujiri says, recalling European scouting trips when Valanciunas played for Lietuvos Rytas.

It's easy to share the enthusiasm, mainly because Valanciunas plays with so much of it. When he misses a shot or a rotation, you'll see it on his face. Then, you'll see him try to make up for it. For years, scouts have taken note of his energy, how he covers ground on defense, demands attention rolling to the rim and seeks contact in the paint. In today's NBA, big men don't need to be able to make their free throws to make eight figures a year. Valanciunas does all the things they're required to do, plus he excels from the line at no additional cost -- at least for now.

The version of Valanciunas on display at NBA Summer League is looking just like the one we saw late in his rookie campaign, only stronger. After averaging 15.1 points, 7.3 rebounds and 1.9 blocks per game and shooting 63.4 percent from the field and 85.4 percent from the free throw line in the season's final month, he went to work on his upper body.

In Las Vegas, Valanciunas is outmuscling opponents with ease. It's to the point where Raptors head coach Dwane Casey says he needs to make sure he doesn't get so bulky that it slows him down. 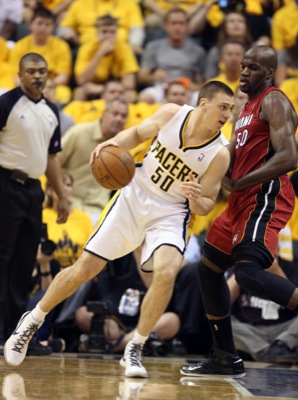 Raptors HQ breaks down one of Valanciunas' possible frontcourt partners

"Just look at him," Toronto forward Quincy Acy says. "It's just a testament to his hard work. He's been fun to be around. We worked out together before practice a lot our rookie year. That was fun, too, to see him work hard and he's still out there getting big minutes. It just says a lot about him as a person and how passionate he is about the game and getting better."

Through three games on the summer squad, Valanciunas has averaged 20 points and 9.3 rebounds and has made 24 of his 27 free throw attempts. He's committed turnovers and fouls too often, but might still be the best player in Vegas. The Raptors are trying to feed him down low, something they did with increased regularity as last season wound down and will continue doing next season.

"Every time I get the ball in the post, I get some experience from that," Valanciunas says. "I'm trying to use that experience. I'm trying to learn as much as I can."

Casey wants Valanciunas to spend time guarding players four or five inches shorter than him before the season starts so he's prepared for the league's most athletic bigs. He also wants him to improve his awareness -- "He works so hard at running, he sometimes loses sight of the ball coming behind him or where the ball is," Casey says of his transition defense -- and simply get more reps in before he joins the Lithuanian national team for Eurobasket 2013 in Slovenia.

Valanciunas stands out in Summer League. The other big men his size can't move like he does. The ones who hustle like him don't have his skills. It's this rare combination, plus his love for the game, that made him a top-5 draft pick. What he's showing now is thanks to a year of adjusting to NBA personnel and terminology, getting comfortable in Toronto and working like mad to improve his frame and his game. He's looking dominant, as his talent and size suggest he should. The idea now is to build on last season and this summer, and be consistent over the course of 82 games.

Ujiri and his new Raptors front office have numerous problems to solve as they determine the long-term direction of the franchise. Luckily, it seems safe to say the center spot isn't one of them.