Ten weeks of lightning: the legend of Dante Hall, the human joystick

For a brief period of time 10 years ago, Chiefs return specialist Dante Hall electrified the NFL with a series of astounding jukes, spins, and touchdown runs. This is an appreciation of the X Factor, lest we ever forget.

Share All sharing options for: Ten weeks of lightning: the legend of Dante Hall, the human joystick

It's September of 2003, and I'm running a mall RadioShack by myself. I volunteer to work Sundays, because DirecTV provides the store with free Sunday Ticket. That's the only means I really have of watching my Chiefs, who in 2003 are a superbly Fun Team.

My idea of a Fun Team is one with outstanding talents and miserable flaws alike. These talents and flaws act like ... well, not a seesaw so much as the lever of a handcar, pushing fans along bumpy sun-bent rails across rickety river bridges, into coal mines, through dynamite-blasted mountains and then back into town. (If you're not dead. You are probably dead.)

The Chiefs' run defense was pitiful. They gave up an average of over five yards per carry and allowed over 200 rushing yards in four different games. They also owned the best offense in football. Trent Green passed for over 4,000 yards, and Priest Holmes ran for over 1,400 while rushing for 27 touchdowns, then an all-time NFL record. Chiefs games in 2003 were often pretty stupid experiences, and their season would end in monumentally stupid fashion: a 38-31 playoff loss to the Colts in which neither team punted even once.

Great things can be stupid, too. On this particular Sunday nearly 10 years ago, I watched this happen from my RadioShack. You, the customer, walked in the door, and I would have missed this moment had I not done such a great job of letting you know I didn't care about you.

A few things about this.

I. Dante Hall was an alien.

Upon realizing Dante Hall was the captain of a human-shaped spacecraft with the stop-start ability of a trackpad cursor, the Chiefs tried to promote him from the ranks of the special-teams unit. Despite his success as a running back in college, though, he couldn't do much from an NFL backfield. They tried him at wideout too, where he found only modest success, because most wideouts are taller than 5'8" for a reason. Once he caught the ball with a little space, he could make things happen. Things like this juke, which is still perhaps the most embarrassing juke I've ever seen in the League:

It seemed like Hall was meant to be a return specialist, though. If football's scrimmage play is representative of "civilized" warfare, the sort waged by Napoleon and Sherman and Rommel, the kick return produces the sort of chaos you'd see either in modern guerrilla warfare or the sort fought with clubs 10,000 years ago. There isn't much of a play to call, there isn't a pocket, and there isn't a wall of giant men to protect it. The receiving team forms wedges and the like, sure, but often the blockers are effectively just sort of tossed out there like a handful of rock salt on a slippery driveway.

That is where Dante Hall succeeded. He was going to get touched, because you almost always get touched, but he had this sort of supernatural gift for bouncing away from danger.

He did that here, too, by rolling over a tackler's body, springing back into a sprint, and running for a touchdown.

That touchdown was called back by a hold away from the ball, which is pretty much the saddest thing that has ever happened.

Entering this game against the Broncos, Hall had returned a kick or punt for a touchdown in three consecutive games, and six of his last nine. Another return in this game would tie the all-time league record for such a streak. Folks whose job it was to say football things behind microphones started to wonder whether it was worth kicking the ball to him at all. 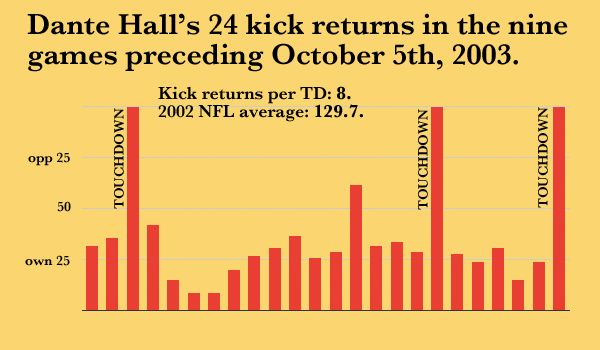 Hall tended to take risks, which is exactly what you ought to expect a big-play return specialist to do, and sometimes his zig-zags would stick him inside his own 10-yard line. A sample size of 24 kick returns might not be as large as we'd like; even so, he had managed to do three times what only happens in the NFL once every 130 times.

It was a perfect storm: not only was Hall lightning-fast and exceptional at every skill demanded by the position, but the Chiefs had a terrific overall special-teams unit let by one of the best special-teams coaches in the game. John Clayton, from 2003:

The Chiefs have Frank Gansz Jr., son of one of the greatest special teams coaches in NFL history. Gansz has the Chiefs working more on directional kick returns more than straight ahead punts because he anticipates seeing more, and it makes Hall and his seasoned blockers better at those type of returns.

Some suggested that teams ought to intentionally kick the ball out of bounds, take the penalty, and give the Chiefs the ball at their 40-yard line. This doesn't seem like a great idea, because giving an offense like that of the 2003 Chiefs such great field position would spell trouble and Hall's rate of scoring surely wouldn't be sustainable. That this idea was even mentioned out loud tells us something about how damn exciting this dude really was.

Hall scored just as many times on punt returns. 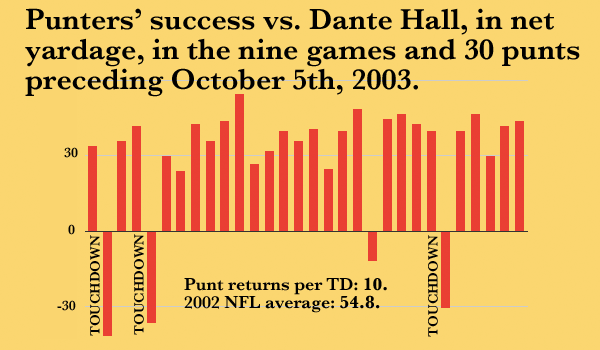 Keep in mind that these punt returns include several fair catches; punters would sometimes arc their punts high in the air, thereby sacrificing some field to prevent Hall from getting any space in which to work.

As the Madden football video game series has progressed, it's come closer and closer to striking a really difficult balance. They must reduce a ball carrier's movements to a single thumb stick's worth of input, and they must do this while still a) making the player move as he might in real life, and b) keeping the experience fun.

If you're used to the recent Madden games, try going back and playing, say, Madden 2003. It's a hoot. Players fly eight yards in the air when they dive, ball carriers juke so far to the side that it looks like they're teleporting, and the fast guys can stop and change direction on a dime.

This is particularly evident in the kick return game. How many times over the years have you returned a kickoff in a Madden game by reversing field three times, or running directly backwards to shepherd the kicking unit out of the way? This isn't supposed to work in real life. That Sunday, for Dante Hall, it did.

And yet, in October of 2003, a lot of us who had been watching Dante Hall expected it to work. It was a feeling of, "this is impossible and a terrible idea and it's SO GOING TO WORK." Yes, Dante, by all means: waste a few seconds juking East and West, then run directly backwards.

As Dante went to work inside of his own 10-yard line, juking and shifting and tiptoeing to a stop and reversing field, the field sort of fell into disarray. Blockers and defenders alike were losing their feet. Dante Hall was only 5'8", but as it became clear to us that he was somehow going to find daylight, he seemed like this giant, untouchable monster, the sort that sends overalled townsfolk into the hills with torches and pitchforks.

Only this time, the monster won. And every Denver Broncos fan who remembers this play can tell you why.

IV. Yeah, but those blocks in the back, though.

For such a ludicrous play to occur, everyone has to do their part, and thankfully the officials held up their end beautifully. Dante Hall would never have made it past his own 10, were it not for two "block in the back" offenses that the refs refused to call.

This is what an illegal block in the back looks like.

V. Yeah, but the Broncos, though.

Depending on how you choose to count, the Broncos got juked at least five times here. Thanks to those illegal blocks and their own follies, they were falling all over themselves. Since I am a Chiefs fan, and these are the Broncos, I'm just gonna erase all the Chiefs out of this play and enjoy the spectacle.

VI. You, the valued RadioShack customer.

I don't understand why y'all thought it would be a good idea to shop in my RadioShack that day. The Broncos and Chiefs were both 4-0, Dante Hall was looking to tie a record, and plenty of other folks were on the same page I was. It was a mall store, so people would just pop in, watch a few minutes of football with me, and leave. That was fine by me. The registered currency of my life force was football, not dollars.

Some of y'all, though, you wanted to buy things. You wanted help. It was gross. Why did you even want to shop in my RadioShack anyway? It was a dumb store. 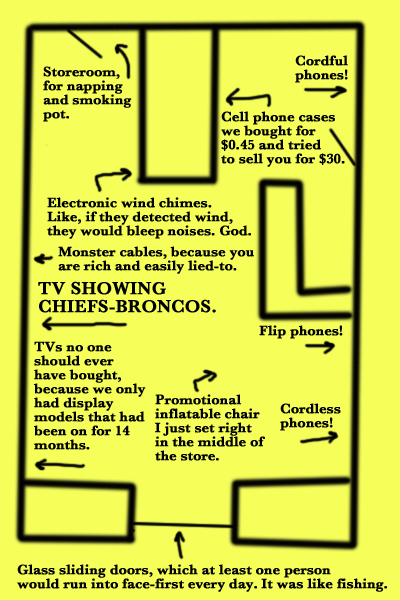 I want to single out one of you in particular.

It was probably around 3:30, I guess. The Broncos held a 23-17 fourth-quarter lead over the Chiefs. I was standing there and watching with the mall's security guard, a couple kids some shopper had left me to babysit for free, and a couple guys who were killing time while their girlfriends shopped. I make $800 a month. You want me to provide Customer Service. All right.

YOU. I'm in the market for a TV.
ME. Ah, well, we're a mall store, so we don't have much in stock beyond what you see here.
YOU. Just the display models?
ME. Yeah ... I'm not supposed to say this, but frankly, these have been on 10 hours a day for about a year. I wouldn't recommend them.
YOU. [annoyed] Then why do you sell them?
ME. Because we are a bad store.
YOU. I'd like a discount if I get one of these. Can I speak to the manager on duty?

The Broncos' Micah Knorr trots on the field to punt.

ME. That's me. I'm able to give you a five-percent discount if it's a display model.
YOU. That isn't much. You know that I can go down to Wal-Mart and get these for $20 cheaper, right? And they're not display models.
ME. If I were you, I'd just go there.
YOU. [more annoyed] What?
ME. You need directions?

God bless you for stomping off as soon as you did, because literally five seconds later, Dante Hall ran back that 93-yard punt return to give the Chiefs the game-winning score, and I witnessed all of it. I really didn't know how to tell you to leave without just coming out and saying so. Did you end up buying a TV that day? I hope not, because the early 2000s were the worst time to buy a TV. Most of them were cheap, so you were suckered into buying one, but that also meant that they were shoddily-built, with speakers that blew and buttons that fell out. Flatscreen TVs didn't become affordable until a few years later, so you were stuck with this enormous 130-pound block of impossible-to-move crap, and you'd toss it out back and tape notes to them begging the garbage men to take it, but they probably wouldn't, and you were yoked to it forever and ever. I did you a favor.

Anyway, I apologize, but I am not sorry.

The next week, Dante Hall had a shot at returning a punt/kick for a touchdown in a fifth consecutive game, something no one had ever done. Packers punter Josh Bidwell tried to kick it to the sideline, but Hall managed to catch it while barely inbounds. And then he took off.

The punter got him. The punter.