Monday night, I clicked on something and saw this headline:

Huh. I did not see that coming!

But that got me to wondering about the Yankees' all-time strikeout leaders, and so I dug up this list: 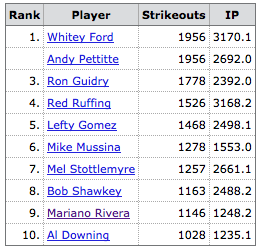 That's from Baseball-Reference.com, of course. And you might have noticed something slightly odd. According to that list -- and according to Whitey Ford's page at MLB.com, too -- Ford finished his career with 1,956 strikeouts. Which would mean Pettitte actually broke the franchise record in the second inning when he struck out Clete Thomas on three pitches.

Anyway, somebody apparently found another strikeout for Ford that never showed up in The Baseball Encyclopedia or Total Baseball or any of the other doorstop references. Which is neither here nor there, really. Just another reminder that any statistic from before around 1980 is just an approximation.

My real point here is ... Andy Pettitte? Strikeouts? But this merely reinforces something I've probably mentioned before: The Yankees' legendary hitters have not been matched by legendary pitchers. On the one hand, they've got Babe Ruth and Lou Gehrig and Joe DiMaggio and Yogi Berra and Mickey Mantle and Derek Jeter, and on the other they've got Whitey Ford and ... Red Ruffing and Ron Guidry and Andy Pettitte?

Yes, actually. Mariano Rivera actually leads the Yankees in career Wins Above Replacement, which really makes my point for me; I suspect there are very, very few teams with a relief pitcher atop that list. Here, I'll show you: 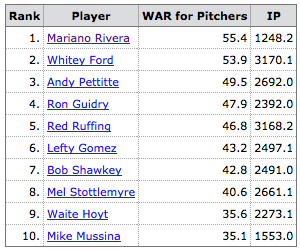 Granted, Rivera's hardly just another relief pitcher. He would top the Wins+ list for ... here, I'll check ... six American League teams: Tampa Bay, Kansas City, Texas, Orange County, Seattle, and Houston. And he'd be No. 2 for most of the rest. But just look at that list; Ron Guidry and Red Ruffing are hardly household names, and Lefty Gomez became more famous for his one-liners than his pitching.

Again, though, it's not so surprising that a team wouldn't have a more impressive list of starting pitchers; the Royals have been around for nearly 45 seasons, and their top pitcher (Kevin Appier) would rank just fourth among the Yankees' starters. What's surprising is that the Yankees don't have a more impressive list. But that's just bad luck, as very few teams of any stripe come up with a Warren Spahn, a Tom Seaver, a Walter Johnson. Looking at the American League teams, I suppose the most surprising thing I found is that Dave Stieb would top the Yankees' career list.

As for Pettitte, not bad for a guy who spent three seasons in Houston, then "retired" a couple of years ago. And let's remember too that Pettitte was a 22nd-round draft pick, way back when. I don't know about you guys, but I think Andy Pettitte belongs in the Hall of Fame someday. Right along with John Smoltz, another 22nd-round pick who showed up every October for a lot of Octobers in a row.