Tanking, options, the Celtics, the 76ers and rebuilding in the modern NBA

Will the Boston Celtics and Philadelphia 76ers be "tanking" next season? It depends on your definition of the term.

Share All sharing options for: Tanking, options, the Celtics, the 76ers and rebuilding in the modern NBA

Let's talk about tanking, which is one of those loaded phrases that has assumed both more and less meaning in recent years.

Tanking is a bigger deal in the NBA than in other sports because there are A) fewer franchise players and B) more difficult avenues to acquire one. Baseball teams have won the World Series without a bona fide ace and NFL teams have won Super Bowls without a Hall of Fame quarterback. It's harder to win without those valuable players, but not impossible.

The NBA is different. The last NBA team to win a championship without a franchise player was the Detroit Pistons in 2004, who compensated with a large number of really good All-Star players. They stand out as a huge exception to the rule.

The most obvious way to acquire a superstar in the NBA is through the draft, since market size, cap space and roster management mean nothing in the lottery hopper of life. Teams have been tanking for draft picks for years. Sometimes it works. More often than not, you get Chauncey Billups and Ron Mercer, to cite one example.

That's a very specific form of tanking and it's the one most casual fans grab on to whenever they hear about some shiny new bauble in an upcoming draft. It goes without saying that most of these people have never actually watched Andrew Wiggins or Julius Randle or Jabari Parker or any of the other hyped incoming freshmen into what many are saying will be a loaded 2014 draft. But hey, it's a plan everyone can understand, and there's no greater promise than untapped potential.

Why the Celtics should 'tank' 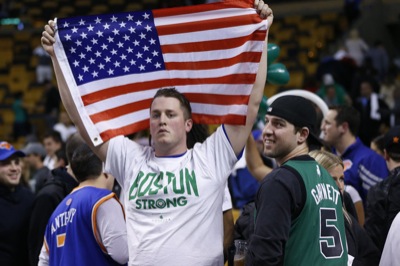 Tanking, as it's most commonly referred to, is a horrible practice that sounds much better in theory during the summer than the winter when the likes of Brett Szabo and Nate Driggers are getting minutes for your Boston Celtics. Sorry, Danny Ainge, but the Celtics most definitely tanked in 1997, and while 2007 is up for some debate, let's not forget it was the only season that Paul Pierce missed significant time with an injury.

The problem with tanking under the strictest 1997 Celtics definition of the term is that not only are you putting out a horrible product and asking people to pay money for it, you're also not really developing for the future. There's one endgame under that scenario. If it fails, you've just wasted a year and set yourself back even further.

That's the technical difference between the two, as the 2007 Celtics at least played a number of young prospects that they later turned into trade assets when the hoped-for lottery results went awry. The 97 C's had Antoine Walker and a bunch of decent late 20-something role players that Rick Pitino ultimately squandered, which is a whole different story.

Tanking does have its purposes beyond hoping for lottery luck. Take the Philadelphia 76ers, who traded their best player in Jrue Holiday for Nerlens Noel and a first-rounder in next year's draft. That's a ballsy move for first-year GM Sam Hinkie in that Holiday is good, young and on a very reasonable contract.

But Hinkie had another motivation. The Sixers owe a lottery-protected first-rounder to Miami in 2014 or 2015 that becomes a pair of second-rounders if the obligation isn't met. In other words, it's in Philly's best interests to be bad enough to miss the playoffs and not surrender its pick. The cap-space savings from Holiday's $40 million extension to Michael Carter-Williams' rookie deal is an added bonus.

Will the 76ers actually 'tank'? 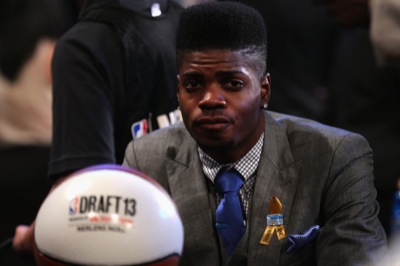 (By the way, that pick was conveyed through a draft-day deal for Arnett Moultrie, who played about 550 minutes last season and may or may not turn into a good NBA player. The thinking at the time was that the Sixers would be great with Andrew Bynum in the fold and had less of a need for some future draft choice. Such is the danger of dealing picks. See also: New York Knicks).

While the Sixers stagger, Hinkie has arranged for promise in the form of Noel, MCW, cap space and the aforementioned future picks. It's a long-term rebuilding plan that could pay off handsomely in a year or it could blow up in their faces for any number of reasons. But it's a plan that makes sense, especially for a franchise that ran the equivalent of an ultra-marathon on the treadmill of mediocrity.

Ainge is doing something a little bit differently. In trading Kevin Garnett, Paul Pierce, Jason Terry and (sort of) Doc Rivers, he acquired four future first-rounders spread out over the next five years that give him a total of nine picks. Left alone for now is Rajon Rondo, their enigmatic point guard who could probably bring back more picks if the Celtics want to trade him. The Celtics have maintained for months that they don't want to trade Rondo and he has sent signals that he is more than happy to pick up the mantle for the next generation of the franchise.

Rondo alone doesn't make the Celtics good, but his presence guarantees that they won't be terrible. He's not so much a cornerstone player as a starting point.

Combining Rondo with Jeff Green, Avery Bradley, Jared Sullinger and first-rounder Kelly Olynyk gives next year's Celtics the opportunity to get young players valuable minutes and also establish their potential trade value. The nine first-rounders will either yield more talent or are readily available to cash in on a proven star when the time is right. Look no further than the Houston Rockets who turned years of accumulated picks and players into James Harden.

Ainge would also like to clear out some contracts to get under the luxury tax sooner rather than later. Not only is it bad business to pay the tax on a mediocre team, it's also tougher to work trades under the terms of the collective bargaining agreement.

That's also a plan, although it's not as easily defined or communicated as the outright tank. Savvy Celtics fans understand this, but unknown Player X at undetermined Time Y isn't as much fun as dreaming about Wiggins or Randle or Parker. As it stands, the Celtics are not tanking, per se. They are merely marking time.

That could change in any number of ways this summer. If they trade Rondo, or, conversely, if Ainge is able to acquire a big-time talent with all of those assets, their immediate future will become much clearer. The point is flexibility and Ainge has that now where none previously existed.

The ultimate lesson over the years is that there is no one way to rebuild. Both Ainge and Hinkie understand this and they have set their franchises up for potential success down the road. It may work or it may prove frustrating, but however the draft lottery unfolds next season there are options, and that's what you need in the modern NBA.

• Rondo's on board with Boston's rebuild