Raccoon-throwing: An introduction to the only true sport in sports

Over the weekend, we witnessed a fantastic raccoon throw, and a time-honored sport has found itself in the national spotlight once again. Here is a primer on raccoon-throwing, otherwise known as "fool's baseball."

Share All sharing options for: Raccoon-throwing: An introduction to the only true sport in sports

Early Saturday morning, Digg founder Kevin Rose discovered that his dog was being assaulted by a raccoon. Above, please see the solution at which he arrived.

It was a tremendous act, but it was certainly not without precedent. In fact, raccoon-throwing is a centuries-old American sport, complete with rules, a raccoon-farming industry, a governing body, and thousands of raccoon-throwing enthusiasts -- otherwise known as throw-smiths -- in pursuit of athletic greatness.

I'd like to tell you about the sport of raccoon-throwing. It's just as it sounds: grab a live raccoon by the tail, and as you would throw a discus or hammer, throw him or her as far as you can.

This is clearly the first issue we must address. Though raccoons are objectively nasty, mean, horrible cat-rodents, we respect their agency as animals that perhaps might not want to be grasped by the tail and thrown by human beings. Then again, neither does an unbroken horse wish to be ridden. The following must be considered:

- These beautiful animals love to be thrown. You can tell by the look in their eyes. They want to compete.

- Each raccoon is raised on a raccoon farm; at three weeks of age, they are sorted by "throw-ready" and "throw-unready." The former are relocated to all those Wendy's locations with the SuperBars you remember as a kid and believed were torn down, when in fact they were all towed to the Nevada desert. The latter are developed by their handlers. Notable throw-ready raccoon farms include Bill Carson's Flying He-Coons of Ocala, Florida, and the weird wrap-around section of every Arby's dining room where nobody ever eats.

- The raccoon's landing area is sufficiently padded, and raccoons are trained to tuck and roll. See, they just love to compete. They just really love the thrill of competing. Ask any raccoon throw-smith. They can tell they're competing.

- They just love to compete. 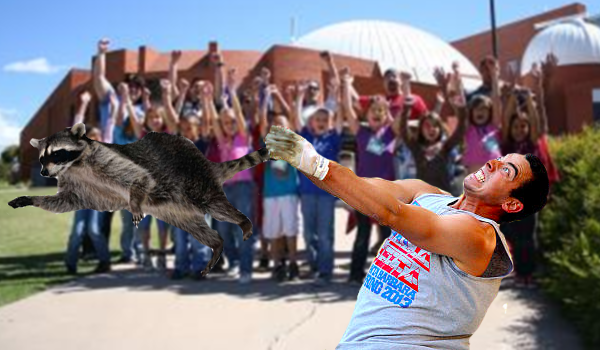 Regulation raccoons weigh approximately 16 pounds, the same weight as a regulation-size hammer in hammer throw competitions. It stands to reason, then, that champion hammer thrower Yuriy Sedykh could have thrown a raccoon 260 feet.

You might see such perfect form and think you can just pick up your raccoon gear (a raccoon) and throw like a champ, but there is an art and science between each throw, or "vomit." There are two primary raccoon-throwing techniques:

The raccoon throw. Hold the raccoon, throw it, and then don't anymore on account of you threw it already.

- If you do not want to throw any raccoons, then that is fine, but you will not be able to compete.

- When does football start

- Five raccoon throws are known as a Chore. There are 24 Chores in each Frustration. A full raccoon-throwing match, known as a Complaint, may last as long as eight hours. We say "may" because nobody knows for sure, because all variables that cannot be quantified with a tape measure are disregarded outright.

- One hundred eight (108) throw-smiths compete against one another in round-robin play, and 16.7 advance to a tournament. This tournament bracket is formatted as follows: 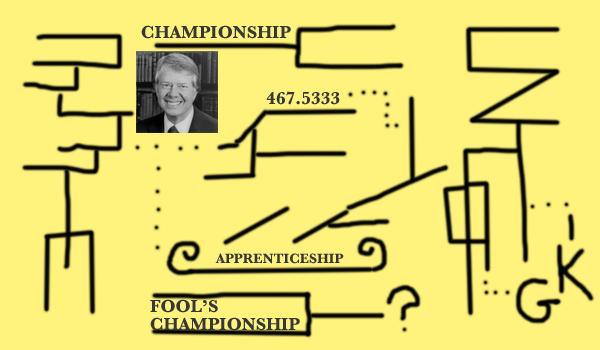 1817: The first raccoon is successfully bred by Harvard scientists by cross-breeding a cat and some syphilis.

1819: John-Memphis Henderson becomes the first person to throw a raccoon. He at first believes he has circumnavigated the globe and landed in India, though contemporary historians agree that in fact, he just threw a raccoon.

1901: Sport has substantial uptick in popularity after a raccoon assassinates President William McKinley.

1922: Clem Tunstall wins the first Grand Frustration in Blowing Rock, North Carolina with a throw of 34'19". Both raccoon and thrower die in the ensuing fracas. His family is awarded the prize of one tub of molasses and several pairs of woolens.

1968: LSD is outlawed as a performance enhancer for both humans and raccoons.

1986: Sven Hholgart, three-time champion, loses the title belt after he messes up and just pets the raccoon instead of throwing it.

2013: Who is the next raccoon star, well guess what it's you