Los Angeles products all grown up at USA Basketball minicamp

Jrue Holiday, DeMar DeRozan, Klay Thompson and Paul George used to play each other in high school and on the AAU circuit in Los Angeles. Now, they're all shooting for a Team USA spot together at the 2013 minicamp in Las Vegas.

Share All sharing options for: Los Angeles products all grown up at USA Basketball minicamp

The L.A. product is reminiscing after the first day of USA Basketball minicamp at the Mendenhall Center in Las Vegas. Holiday and DeRozan have now played four years in the NBA and will make around $40 million over their next four. They're spending this week with the best emerging talent in the country, wearing jerseys that say U-S-A on the front.

"It was at the Warrior Center down in Orange County or Santa Ana or wherever," Holiday continues. "He's like, ‘Watch this.' And I'm standing at halfcourt and he just goes up and dunks. And think of like a sixth grader just going nuts. It was insane."

Since then their teams battled in high school, Holiday playing point for Campbell Hall and DeRozan on the wing for Compton High. Holiday then spent a year at UCLA, DeRozan at rival USC. After the 2009 draft, they both found themselves in the Atlantic Division, with Holiday selected by the Philadelphia 76ers and DeRozan by the Toronto Raptors.

Holiday developed into an All-Star in Philadelphia before being traded to the New Orleans Pelicans this offseason. While he first earned minutes because of defense, last season he averaged just about 18 points and eight assists per game. DeRozan went from a skinny slasher to a powerful guard who can bully smaller opponents on the block and find cutters with crisp passes. The once-shy rookie is now the one giving young Raptors advice and setting an example with his work ethic.

"I remember Jrue had braids when we was kids, and next thing you know we got our own families we gotta take care of"-DeMar DeRozan

"I told Jrue yesterday it seems like we're getting old," DeRozan says. "I swear, I remember Jrue had braids when we was kids, and next thing you know we got our own families we gotta take care of and we got our own responsibilities in life."

Both have done a fair amount of growing up this summer. Holiday got married to U.S. women's soccer team member Lauren Cheney in early July. He says putting on a Team USA jersey means he understands how his wife feels doing the same thing, though "she has two gold medals, I don't know anything about that." DeRozan welcomed his daughter into the world in May. An adoring father, he says he'd "give up everything in the world just for that little girl."

Beyond the improved jumpers and confidence on the floor, the two have seen each other mature as men. Reconnecting in Vegas is a reminder of how far they've come.

"It's pretty cool," Holiday says. "It's kind of weird. You don't think that you're that old until I guess you have a wife ... DeMar has a kid ... It's like, man, maybe we are older than what we think we are, you know?" 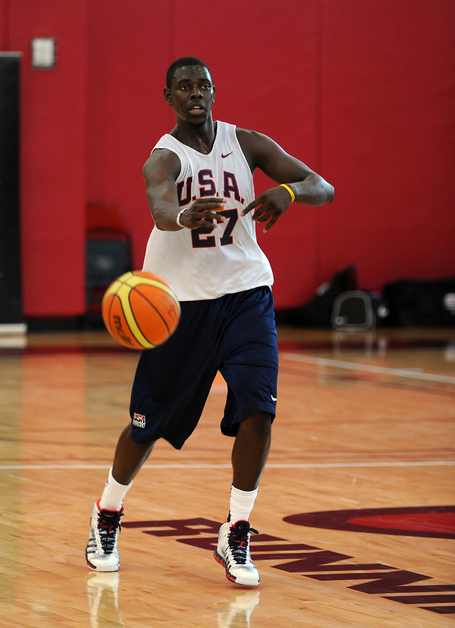 The Los Angeles connection at minicamp doesn't stop with those two.

"All these guys I grew up playing against are now here at camp doing their thing, having fun, making money, living life," Holiday says. "The only thing you can do is be proud."

Golden State Warriors sharpshooter Klay Thompson first played against DeRozan in middle school. In AAU, he and Holiday played for Pump N' Run; only while Holiday garnered all sorts of attention and accolades, Thompson suited up for the B team alongside Paul George. The now-Indiana Pacers swingman was athletic and dedicated at the time but "wasn't the standout guy," says Holiday. As a senior DeRozan dropped 38 points on George's Pete Knight High School in December of 2007.

All four of them are 23 years old and George is now the most prominent. Though Los Angeles Lakers fans are clamoring for him to come home, he is likely to sign a maximum contract extension in Indiana before the start of next season. He's coming off an All-Star and Most Improved Player-winning campaign that culminated in a seven-game slugfest with LeBron James and the Miami Heat in the conference finals.

"That's when you tell your friends, ‘I remember when Paul George was on the second Pump N' Run team,'" Holiday says. "Now look at him. Hard work pays off. I guess you never really know who will get up to the top, but if you're a hard worker you can pretty much do anything."

For USA Basketball, this week is about the future. Other than Anthony Davis, no one in minicamp has competed in the Olympics or the World Championships -- the oldest player in attendance is 25-year-old Mike Conley of the Memphis Grizzlies. But as these old friends work toward getting better, it's impossible not to look back. Conley called Holiday a "veteran" on Monday, an odd moment for a player born in the 90s.

"We're like 23!" says Holiday. "So I guess as a 23-year-old you still kind of feel like a kid but when you put that 'veteran' in front of my name it's like, man, I've been here for a while. And it goes by pretty fast, so you gotta cherish it."