This week in ENHANCE, we take a look at some video game glitches. Prepare your soul.

While some of my favorite video games of all time are installments in the Tony Hawk series, I remain a staunch novice in the world of other skateboarding games -- unless we're counting the skateboard portion of California Games for the Sega Master System. (And I don't think we are.)

Luckily, an intrepid YouTube user by the name of HelixSnake has been kind enough to compile over 10 minutes of clips from a video game called Skate 3 and has uploaded that compilation to the Internet. Let's dig into this, shall we? Since this video is longer than most videos we feature on ENHANCE, it's going to take more than one article to tackle this in its entirety. I think we may be up to the challenge.

Since I've never played Skate 3 myself, I'm going to just extrapolate aspects of the game from the video as we go along. In addition to our normal assortment of observations and deep thoughts, of course. 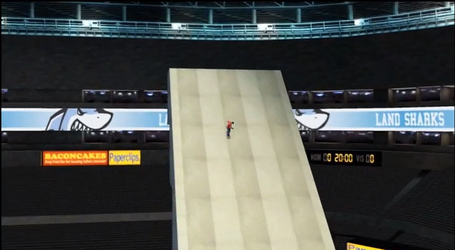 :00: We begin with an insanely long ramp that appears to extend from the upper reaches of a massive stadium. The scoreboards and advertisements give us a bit of insight into the game itself. There is the standard video game trope of a fake food sponsor with a sign for "BACONCAKES," which also doubles as fulfilling the standard video game/Internet trope of "lol bacon." Really firing on all cylinders here.

There are also signs for "Paperclips," rendered in purple and gold, which leads me to believe that 1. this is a play on the office supply store "Staples" and 2. this arena might be meant to approximate the Staples Center? But if that's the case, why is the wraparound scoreboard advertising the "LAND SHARKS"?

(As an(other) aside, is "Paperclips" a really lazy spoof of "Staples," or is it perfect and brilliant in its simplicity? We will literally never know.)

The skateboarder hits the bottom of the ramp, which ends in a half pipe on its side. We now have our first hint that something MAY be SLIGHTLY SCREWY with the physics of this game. The character flies back, upside down, at an angle, while his board disappears into the air. Slowly, eerily, the skater rights himself, sticks the landing and celebrates. We suddenly notice that the stands of the arena are empty and there is no score, nor any music. Merely an ominous rush of wind and an endless, horrific echo. This is the Event Horizon of skateboarding games. Skate or Die as captured by Bergman and written by Lynch. I'm going to assume the point of the game is to ollie so hard that you escape the inexorable ennui of existence. 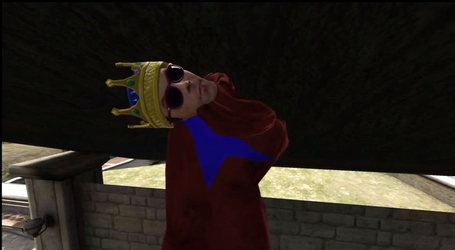 I'm going to further assume that every character in the game is Steve-O.

Okay, let's try to puzzle out some more things about this game, based on what just happened here.

1. There is a "free-roam" portion where skateboards don't have to be involved at all.

2. Park benches hurt you, but will also fly away like dandelion fluff if you nudge them.

3. If you manage to bounce an NPC from a bench seat to a bench back, you win bonus points! [citation needed]

A character lands badly, half-sticks in a planter box and then the planter box begins slowly sliding away across the pavement. I think something is wrong with this inception. Can I get a refund please? Who taught you guys how to incept? Sheesh.

:54: There is just so much going on here, but it all leads to the first legitimate outright staged joke in the video. It's worth it, in my opinion. 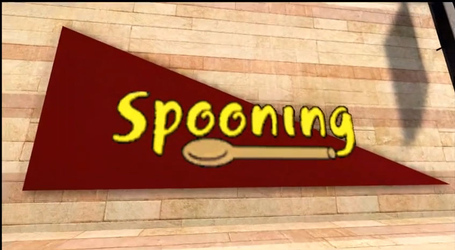 It's worth noting at this point that Helix Snake arranged these clips in order, from his least to his most favorite captures in the game. We're less than a minute in.

:59: Possibly the greatest kung fu move in history. Let's see Tony Jaa or whatever do this:

No, really. Let's see him do this. Make The Protector 5 and have him do it to a guy who makes a staunchly anti-elephant joke. Just please let this happen in real life.

A man falls from a roof and briefly becomes stuck in a streetlight before falling to the street below. His face is a skull and he sounds as though he's made out of garbage cans and autumn leaves. We're already viewing these out of context, but if you imagine them as scenes from a narrative film, it's the best arthouse movie ever. EVER. Takashi Miike's adaptation of the works of Albert Camus.

A man emerges from a wall, sporting a black eye. He is made out of cookie sheets and crepe paper. He falls into a rusty metal swimming pool. All is lost. All is lost.

Wait, you can get a black eye in this game? What do you get when you fall off a building and into a streetlight? Does the media slot begin vomiting blood? 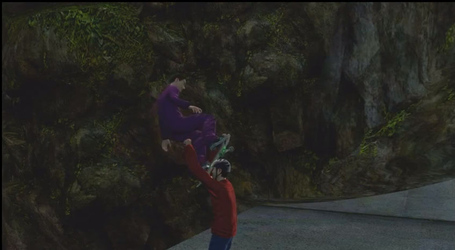 Of course, physics dictate that the man whose face was just jumped off of remain standing and barely nudged, while the force of the jump sends Prince flying through Donkey Kong Country. 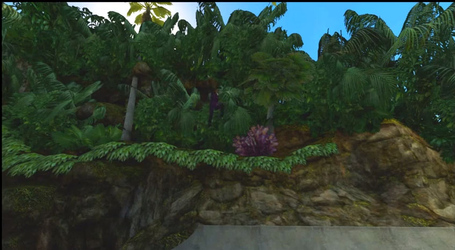 This scene is the inspiration for the lesser-known Soundgarden song "Tin Can Man." Allow me to copy and paste the lyrics below. Please read these in your head with Chris Cornell's scream.

TIN CAN MAN
WHY YOU GOTTA SOUND LIKE THAT?
IT'S UNSETTLING
YOU'VE GOT SOME SORT OF WACKY RUBBER BONES

1:45: Tin Can Man died as he lived: with a vacant stare, weird stubble and his helmet not securely fastened.

It is always important to tuck and roll. Always. Tucking and rolling ensures that you will be able to survive falls from insane heights. That's just science. If you ever find yourself falling off a building, tuck. Tuck like your life depended on it. Tuck so hard that all your friends will want to call you Tuck Everlasting.

Tuck so hard that you forget I just made a Tuck Everlasting joke.

Whoops! Should have stuck that landing! Now you're in purgatory. Way to go, you idiot. Well, at least now you saved us all $13 because we no longer have to see that Sandra Bullock/George Clooney movie Gravity.

Shoved through the ground! And now FROM HELL'S HEART I STAB AT THEE!

I officially have no idea how this game works, because in all these clips, there is almost never anyone around when skateboard stuff is happening, but people without skateboards are freely running into one another and things and flying around all willy-nilly. Maybe this game will start to make more sense ... NEXT TIME.