A guide to enjoying holiday fireworks like an American

With the holiday coming up, we believe a review of necessary fireworks technique and preparation is in order. Noted bootleg living expert Spencer Hall does the work for you, most likely while holding a lit M-80 in one hand and smoking a Black 'n Mild.

Contrary to what law enforcement may tell you, fireworks are legal everywhere without restriction. Should a police officer stop and inquire about your fireworks, and point out that they are illegal, simply explain this to them. "Nah" and "c'mon" are persuasive, but also consider offering them fireworks or beer as a gesture of thanks for the fine work they do. This works way more often that it is supposed to under our current system of law.

Ideally, you will purchase these fireworks -- in cash only, or in barter for fresh bushmeat -- from someone conducting business in a structure without a floor. You don't know their name, and nor do you want to ever learn it: People who sell fireworks did not start off in life thinking they would be selling you an 18-year-old cardboard tube packed with a terrifying payload of Chinese gunpowder and floral-patterned evil.

In another time, they would be the cloaked highwaymen of the ungoverned turnpike. And in 2013, they're not telling you they have a toy cannon that for $45.99 will put a technicolor hole in the side of a camper. But if they did, it'd be right over there between the creepy-crawlers and those spinners.

You may purchase fireworks indoors in one of two locations without shaming yourself and violating the bootleg fireworks code. The first is the legendary Tennessee/Alabama Fireworks in Kimball, Tennessee, where you can also purchase authentic country gibberish-a-brac like Dale Earnhardt nativity scenes made of beef jerky. (They are delicious, and are good for up to eight months.) It was also in the movie Dutch, and is therefore immortal forever.

The Bang Bang Lady has been married for 33 years, enjoys gardening and canning, and will sell you enough dazzling raw power straight from the hell-factories of Taiwan to blow the roof off your sturdiest shithouse. Phenix City, Alabama, hasn't ever ruined a July 4th, but it has gotten some people brand new roofs thanks to "rogue lightning strikes" that coincided with the holiday.

I'm pretty sure they keep an AR-15 behind the counter. Be polite.

Sparklers are crap. They smell like radiation poisoning, leave little LSD-streaks all over your vision, and burn out after either a) five seconds, which is too fast, or b) after 10 minutes, which is way too long to hold burning magnesium and aluminum. Breathe in those fumes: They're burning metal, and you want that deep into immature lungs in the early stages of development.

Firecrackers aficionados come from two schools. The first believes firecrackers are the condiment firework, added to larger displays in order to heighten the general snappiness of the moment. The second, however, believes firecrackers are a main dish, a side, a beverage, and a condiment. This someone has demonstrated this by placing a lit firecracker in your hot dog, and will later throw a full string of them on the grill just to see "who's ready for SEAL Team Six at this cookout."

We belong to the latter, because there are no sides in life and your training should reflect this. What are you training for, you ask? If you have to ask, you'll never know. There is a string of them in your back pocket right now. Run, and you might avoid waking the baby with your screaming. Stop wasting time: I cut the fuse for maximum training efficiency, and it should go off any second now. There's easily two hundred on that Chinese New Year's special.

M-80s and M-90s might not even be fireworks, but the man at the tent sold them to you anyway, and legally that means they are definitely not converted explosives licensed for use only in road construction and mining. Never mind the writing on the side that says "property of Black Pike Mining Company." That is an M-80, and you will tape it to the side of "Over Here Guy" from this bag of green army men, and you will throw it in the fire ring like you are supposed to do.

Not too close to the rocks, buddy. Shrapnel is not festive. 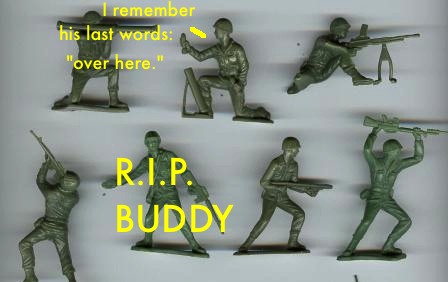 Do not jostle M-80s. Do not speak ill of them in English, Spanish, or Cantonese. Don't sweat on them, because that will make the stable ones indistinguishable from the sweaty, unstable ones. Do M-80s sweat just like dynamite? No, because dynamite is only handled by trained professionals, while you are five beers into the evening and holding one next to a lit sparkler. In that regard and in that regard alone, they are totally different.

If it refuses to detonate even after lit, remember: M-80 is never a dud, but is merely waiting for its next victim. Like Pele the Hawaiian volcano goddess, they demand sacrifice. (See: green army man rituals described above, always starting with useless "Over Here Guy.")

Clustered boxes of multiple charges are a necessity. In the vertical plane, cluster boxes shoot a grid of colorful rockets into the air, eliciting oohs and ahhs from the crowd. If they fall over, they become a Chinese anti-tank installation hurling bright flaming volleys directly into whatever stands in its way: you, the crowd, children, or perhaps a dry compost heap seeping with explosive gases. They have a propensity for falling over. You'll want no fewer than three of them, and you'll want to place them on uneven ground for best results.

You will also want poppers, aka bang-snaps, made from the three substances that made this country great: sawdust, silver fulminate explosive, and daring. The cuddler's firework, the humble popper is banned only in New Jersey, a state that bans every other type of firework including sparklers and even snakes. As a result, no one in New Jersey ever has fireworks ever, and everyone has devoted themselves to other more worthy pursuits. Great job, New Jersey.

Snakes are a waste of time provided you have a pile of mercury thiocyanate around. One snake looks like an earthworm escaping from purgatory, but a burning heap of Hg(SCN)2 looks like the devil's dreadlocks flying through the crust of the earth itself.

The kids will love it or have nightmares about it for the rest of their lives. YOU WON'T KNOW UNTIL YOU TRY.

A Roman candle is designed to be held and fired at the human form, preferably at a close friend wearing a sweater. Each charge contains enough transdermal doses of Vitamin C to keep a human being above their USDA recommended consumption levels for eight years. The firework safety people don't want you to know that, but it's true.

Finally, spinners are a great purchase if you want to set fire to your roof or worry about your roof burning while you sleep, killing you and all you love. Spinners -- rapidly rotating arrays of colorful rockets that fire straight up into the air with a festive buzz -- are attracted to roofs by design, and especially to dry gutters loaded with combustible leaves and pine needles.

No matter where you set a spinner, it will find your roof, where it will either immediately incinerate your entire house or simply smolder up there for months, filling your days with panic and dread. That's just how George Washington and our Founding Fathers felt every day, fearing for their families' lives and constantly feeling the shadow of King George III's noose on their necks. Fireworks are dangerous, but so was building America, patriot. I'm not firing this bottle rocket at you for nothing.

I'm doing it for freedom.