Ryan McDonough's vision for the Phoenix Suns comes into focus

New Phoenix Suns general manager Ryan McDonough has already gotten to work accumulating assets to help with the team's rebuilding project. He sits down with SB Nation to discuss the progress of his plan.

Share All sharing options for: Ryan McDonough's vision for the Phoenix Suns comes into focus

LAS VEGAS -- The phone call Ryan McDonough had been waiting for came early in free agency. With Chris Paul's assurance that he would remain with the Clippers, Doc Rivers let McDonough know that Eric Bledsoe was finally in play.

For the better part of a decade, McDonough and Rivers had worked together with the Celtics, and the C's had a strong interest in acquiring the electric guard. Now, with McDonough in Phoenix and Rivers in Los Angeles, it was time to deal.

The price was Jared Dudley, a solid two-way wing who will look very good playing off Paul and Blake Griffin. McDonough also acquired veteran Caron Butler in the trade, which allowed the Clippers to snag J.J. Redick from Milwaukee. Butler has one year left on his deal and can help set a professional tone with the young Suns, but the prize was Bledsoe.

The 23-year-old guard has never played 2,000 minutes in his three-year career or been a full-time starter, but he averaged 14.2 points, 5.3 assists and 4.8 rebounds as a spot starter behind Paul and was perhaps the most coveted trade asset of the summer. There's still an open question about what position he's best suited to play, but McDonough isn't worried about that.

"I see him as a basketball player," McDonough said during an extended sit-down interview at the end of the NBA Summer League. "I try not to differentiate (positions). That's one of the things we had success with in Boston on a limited basis with Rajon Rondo and Avery Bradley. I'm hoping to see some of the same stuff with Goran Dragic and Eric Bledsoe. If guys are both tough and aggressive and can pass and shoot well, that leads to a lot of good things."

Bledsoe wasn't McDonough's first acquisition, but he may wind up being the most important. The Suns want to run, and having two guards who can push the ball in transition is the first step. McDonough is also thinking about the way the game is played now and how he wants his team to play in the future.

The more guys you have to use those pick and rolls and make decisions and create shots, the better-Ryan McDonough on pairing Goran Dragic and Eric Bledsoe

"There are so many pick and rolls in the game that the more guys you have to use those pick and rolls and make decisions and create shots, the better," McDonough said. "If you surround them with shooters and size, then you're off to a pretty good start."

In his first year as Suns GM, McDonough has a large task ahead of him. He inherited a team that went into freefall last season featuring a mishmash of veterans and young prospects. The Suns weren't just bad, they were arguably the most nondescript team in the league. But they did have multiple first-round picks and a decent cap situation, allowing McDonough the flexibility to make more moves.

Over the weekend he pulled off another trade, dealing Luis Scola to the Pacers for Gerald Green, Miles Plumlee and a lottery-protected first-round pick in 2014. In addition to his own selection, McDonough could have as many as three first-rounders next year. (There is another on the way from Minnesota that's top-13 protected.)

In 2015, the Suns will again have multiple first rounders, including one from the Lakers that's top-5 protected and suddenly looks very appealing. Including his two this past June, McDonough has seven future first-rounders and recent picks in Bledsoe, Plumlee, Kendall Marshall and the Morris twins, who are on all on rookie deals.

Butler and Marcin Gortat are in the final years of their deals, and Dragic is the only veteran signed beyond 2015. While the canvas is mostly blank at the moment, the outline of McDonough's vision is coming into focus. 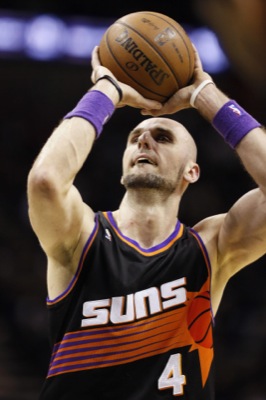 Bright Side of the Sun ponders McDonough's next move.

"This year is all about establishing a culture," McDonough said "Playing hard, playing unselfishly, sharing the ball and developing a system. I won't measure our success this year in terms of wins and losses. Are we getting better and are our guys buying in and playing the right way? That being said, I don't want to be in the lottery forever."

The biggest step in the rebuilding process is through the draft. McDonough's background is in scouting and in June he used the first two of those selections on center Alex Len and guard Archie Goodwin.

Both are raw, unfinished products, but McDonough believes that Len was the most skilled big man in the draft and he's willing to wait for him to develop. Same with Goodwin, who had an inconsistent freshman year at Kentucky but won't turn 19 until August. The Kentucky product flashed some of that ability in summer league, where he was the youngest player on the court. Len, however, was recovering from a second ankle surgery and was not in uniform. McDonough said the center could be back by Sept. 1, which would give him a month to get ready for training camp.

Chosen one spot ahead of Nerlens Noel, the Len selection was McDonough's first big call as a GM. Len had surgery on his left ankle during the pre-draft process to treat a stress fracture. During an MRI in July, the team decided that he should undergo another surgery on his right ankle for what they said was the beginning of a different stress fracture. The second surgery was termed precautionary, and with a nod to the Suns' well-regarded medical staff, McDonough said, "If they're not concerned, then I'm not concerned."

With Bledsoe and Dragic in the backcourt to go along with Butler and Gortat up front, the Suns have the makings of a reasonably competitive starting five. In theory, that will allow the young talent to develop at their own pace under first-year coach Jeff Hornacek, who is the other big addition this summer.

"I really like his intelligence, his character and his creativity, especially on the offensive end," McDonough said of his coach. "He's done everything there is to do in basketball and has been wildly successful. We do have a young group. We drafted two of the younger guys in the draft. Where we are, we can afford to be a little bit patient and not rush them."

This is obviously a transition year, but still an important one for the new regime. Their message to the players on hand is simple. 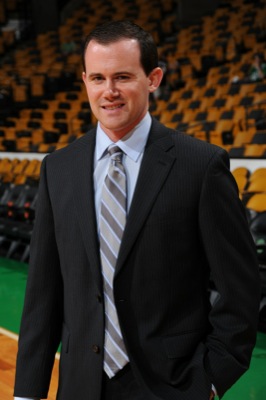 Paul Flannery's profile of McDonough from when he was the Celtics' assistant GM.

"It's an open competition," McDonough said. "It doesn't matter to me or Jeff where you were drafted, how much money you're making, how many minutes you played in the past, what you think your role is going to be. Come training camp we're going to bring in the best guys we can and see who earns the minutes."

Armed with picks, prospects and a relatively clean cap sheet, the Suns are nowhere near completion. The long-range vision is obvious, but McDonough also understands the proud NBA tradition in Phoenix, where the three-year playoff drought is the longest in franchise history since the mid-1980s.

"Every fanbase wants to win as soon as possible," he said. "That's just human nature and the Suns fans are accustomed to great success. They've set a high bar. We want to be good as quickly as possible, but at the same time we want to have the ability to be successful in a sustainable manner."