The Andrew Bynum experience was enough for one Greg Oden fan to realize that the injury risks far outweighs the benefits to signing him.

Greg Oden is about to sign a contract with the intention of playing basketball this season. It feels like we've been riding a roller coaster straight up for the past four years, only there's no telling whether there's an actual ride at the top of this thing or just a really built-up fall to our deaths.

I had planned on laying out a well-constructed-and-rife-with-metaphor-but-mostly-one-sided argument on why Greg Oden is the best player in the universe and should garner a max contract from 29 teams (excluding Portland) and also father my children. This was going to be my Holden Caulfield. This was going to be perfect.

But in doing my research for this piece, I came across something I wrote in 2011 titled "Why the Sixers and Everyone Else Should Want Greg Oden." I jumped down readers' throats in support of the tremendously talented but undervalued and injured 23-year-old.

At the time, I thought that while Oden was certainly a risk, the alternative was equally risky and had the potential to be far more depressing. Where championships are concerned, the good teams take those risks. I thought then that if the Sixers weren't one of those good teams, we'd be watching a healthy Greg Oden leading someone else to the promised land for what the Sixers will inevitably be paying a sixth man.

Since that was written, I've graduated college, moved across the country, worked at three different jobs, lived in three different apartments, moved in with my girlfriend, watched her move out, developed a pretty stellar shoe game, made friends, lost friends and did something athletic at least a few times a week.

Greg Oden, for all intents and purposes, hasn't moved. And I was about to write that exact article again.

Four years is a long time. Despite starting at Ohio State the same year, Mike Conley has played in 363 more professional basketball games. Apropos of nothing, the similarly built and dissimilarly disappointing Kwame Brown has stumbled through 168 more games.

It just didn't occur to me until last week to change my opinion on Oden. I've raised the banners for him for so long that it became part of who I am, at least the basketball bits of me. But over four years, circumstances change and perspectives change. Mine came in the form of another mercurial seven-foot big man: Andrew Bynum. 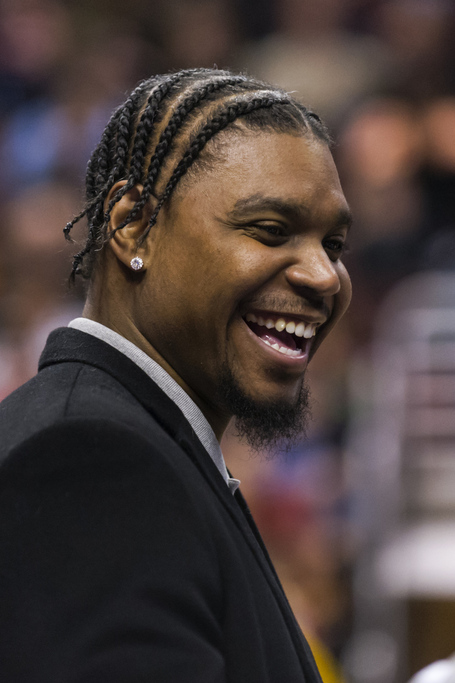 The Andrew Bynum trade was a calculated and necessary risk by the Sixers that did not pay off. Mediocrity is quicksand and trading for Bynum was going to get them out of it one way or the other. As we know, The Other won out, and the Sixers watched Bynum walk away with nothing but two unfortunate years of Jason Richardson and a steep hair salon bill to show for it.

For a year, Sixers fans waited breathlessly for Bynum to play. A legitimate big man that would save the franchise from quick playoff exits and starter's minutes for Spencer Hawes. Salvation.

But after playing in 60 of 66 games with the Lakers the previous season, Bynum injured his knee before he ever suited up for Philly, then busted his other one during rehab. "Chronic" hung in the air around the Wachovia Center longer than the last time Phish came to town. He played as many games for the Sixers as I did. This is not his fault; it's just what it is.

Bynum has arthritis. He will never be the same player he was before. He may not play again, or he may cobble together a few games here and there until he retires when the pain in his knees is too great. There's simply no cartilage there to withstand the physical exertion that comes with being an NBA big man. Doctors don't have the ability to re-grow cartilage. It's gone. The only time he played 5-on-5, his knees swelled up so badly that he couldn't walk. That shut the door on the hope that Bynum would ever play a game for the Sixers. Not one game.

I know this because I watched it all unfold over the last 12 months. But I didn't think that was the case with Oden. Not being there, I didn't realize that the words I was using to reflect my pessimism over Bynum ever playing at a high level were the same ones being used for Oden.

Ben Golliver, now of Sports Illustrated and Blazer's Edge, formerly of CBS Sports, has been around Greg almost his whole career. His Close The Book column on Portland and Oden hauntingly mirrors the Sixers situation with Bynum.

Blazers fans these days are an emotionally exhausted house divided. Many understand the logic and thought process that went into the pick. But many others responded to Buchanan's "I would still draft Greg" quote on Monday night by calling for his job. Some can't get past the Greg Oden and Sam Bowie comparisons. And others, even in notoriously polite Portland, have gone as far as to boo Oden when he is shown on the jumbotron at the Rose Garden.

I have to side with the cautious majority I looked upon with disdain for so long. Oden's just not worth the risk. 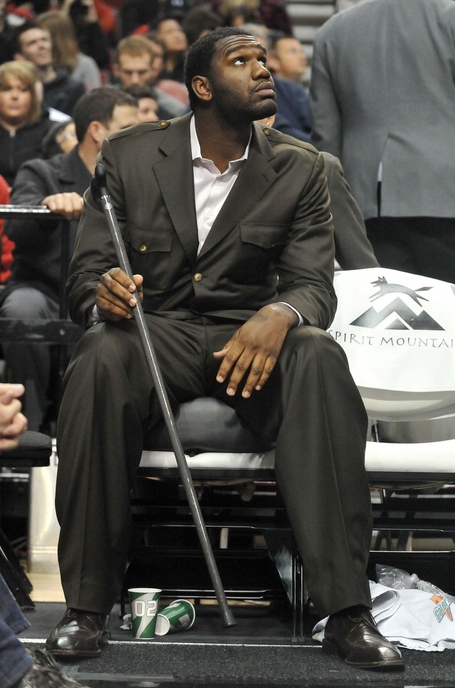 I still agree with myself from two years ago in that the great teams take the risks to break through mediocrity's glass ceiling. But risk is a sliding scale. Boston took a huge risk in giving Jeff Green four years and $36 million after missing a full season due to serious heart problems last summer. Utah took a smaller risk in letting Al Jefferson and Paul Millsap walk in free agency this summer so they can open up minutes for Derrick Favors and Enes Kanter.

With a broken Bynum, Cleveland essentially has a $6 million expiring contract. The likelihood that he plays enough to get his option picked up remains very slim, which means his only value as a trade piece is as a faceless, Richard Jeffersonesque expiring contract. No more introductions, no more song and dance, no more tomfoolery, no more ballyhoo.

The same will be unfortunately true for Oden. He'll probably get a year and an option for a few million less than Bynum got. Not something that will cripple a franchise, but enough that it could prevent a mid-tier team from reaching the top.

While Bynum was physically unable to work out for teams, Oden has and is apparently looking quite good. Greg and his agent have done an impressive job to get back to a point where teams are willing to bid for him. He should be picking a team any day now. Miami or San Antonio could be the perfect destinations. Not a ton expected of him, they can take a flyer and see if his knees hold up. When they don't, he won't get in the way of a championship.

But New Orleans and Atlanta and Dallas? There's far more pressure for him to play and play now, and if he can't do that, those teams will falter.

No matter where he goes, I hope I'm wrong. Oden is such a uniquely talented specimen that's gotten the rawest of deals. He dominated college ball with one wrist. He was excellent in the 82 NBA games he's played. He was drafted over Kevin Durant in 2007 for a reason. This is generational big man talent.

If you asked me a week ago, I would've topped every team's offer for the right to employ Greg Oden. But Bynum changed me. There's no "if he gets healthy..." anymore. "Healthy" is an abstract idea. "Arthritis," "microfracture," "swelling" -- that is his life now.

Sometimes you can't untangle the Slinky. Sad as it is, sometimes you just gotta walk away.