As he has throughout his Celtics tenure, General Manager Danny Ainge made it clear that he isn't afraid to take chances. That's why Brad Stevens is the team's newest head coach.

Share All sharing options for: Danny Ainge stays in character with bold hire of Brad Stevens

Give Danny Ainge this much: He is absolutely unafraid to make a move that runs so counter to conventional wisdom it's as if he never even considered the possibility in the first place. Hiring a 36-year-old college coach with no professional experience to run the Celtics is either genius or foolish. Giving him a six-year contract for roughly half of what he was paying Doc Rivers, as reported by Yahoo! Sports, is either bold or reckless.

There is no middle ground with Ainge. When he took over operations of the Celtics a decade ago, he immediately began tearing down what had been a reasonably good team and spent five years assembling the pieces to construct the team he envisioned. He works on his own timeframe and with confident assurance from the owners that patience is a given and his ideas will be embraced.

When people describe Ainge as a maverick, as most do in the Celtics organization, it's with moves like this mind. Hiring Brad Stevens to oversee an incredibly important and delicate transition in the franchise's history is a quintessential Ainge move and a reminder that no one really knows what will happen next. Suddenly, everything is up in the air, including the fate of Rajon Rondo. But we'll get to that in a moment. 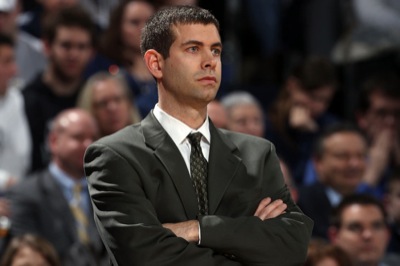 We know as much about how Stevens will handle the actual coaching responsibilities as we know about how new Nets coach Jason Kidd will. He might be great and he might be overmatched. Stevens has years of actual job experience, while Kidd has spent his adult life in the league. Until they're in the crucible, it's impossible to know how it will turn out.

Most likely, Stevens will need time and at least one veteran hand on the bench to master the subtle arts of the NBA game. He'll have to adjust to the long schedule, the odd practice routines and the competing agendas and whims of pro players, who are much tougher to impress than college players.

Stevens does come to the pro game equipped with tags like "wunderkind" and "boy genius" after leading mid-major Butler to back-to-back appearances in the national championship game. As they say in the college game, "The man can coach," and he is also said to be heavily invested in analytics and a process-over-results approach that will play well with a like-minded front office and a rebuilding roster.

He also seems to possess a calm sideline demeanor more attuned to the ups and downs of the pro game than so many of his collegiate brethren who thought they could bring fire and brimstone to the job and were left shaking their heads after discovering that was the absolute wrong idea. Stevens isn't Rick Pitino and he's not John Calipari, who both stomped and fumed their way through unsatisfying ventures in the NBA.

Coaching acumen isn't always the most important attribute for success in the NBA. You need talent first and foremost, support from the front office and some measure of credibility before you can even begin to run a nifty set out of a timeout. With Ainge's backing and a long-term contract, he has two of the three already in place, which is a pretty good start.

Talent is the issue for the Celtics right now, and while there are a handful of intriguing prospects and more on the way in the near future, Stevens inherits a mess of a roster without a legitimate big man and more power forwards and two guards than anyone could ever need. No doubt Ainge has other moves in mind to clear some of the logjam and assemble a more coherent 15-man squad.

Stevens has a tough learning curve 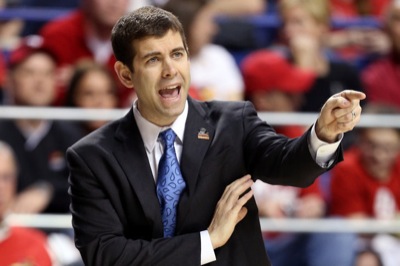 Because other college-to-pro coaching transitions have not gone well.

Stevens also inherits Rondo and his first big test. Already, many are signaling that this is the end for Rondo, and if he is traded, then Stevens' job becomes both easier and much tougher. If Rondo is gone, then Stevens will be working with a blank slate of players who owe little to the previous regime. Of course, it will be without his most talented player.

Power dynamics are a tricky thing in the NBA and it's in both of their best interests to develop a partnership at best and a functional working relationship at least. As difficult as Rondo can be, he's also tremendously smart and he has to realize there's little upside in challenging Stevens if he wants to stay in Boston. The onus is on both of them.

Again, this all comes back to Ainge and whatever grand plan he has in the back of his mind. No one saw the Stevens move coming and anyone who thinks they know what will happen with Rondo or any other player on the roster is guessing at this point. This may work brilliantly, or it could end in spectacular failure.

Either way, Ainge has proven yet again that he is unafraid to take chances, convention be damned.

• Flannery: Tanking and rebuilding | Ziller: When it's OK to overpay