There were a lot of baseball games played over the quasi-holiday weekend. Let's check in with a couple of noteworthy happenings and tidbits.

You might have had a really, really long weekend. You might have snuck out of the office early on Wednesday and went somewhere. You'll have to tell me what that's like. But not now. No, right now we have to catch up on a four-day weekend of baseball together. There were approximately 49,291 hours of baseball played since the Fourth of July, and here are some of the highlights:

The Giants batted out of order

Buster Posey doubled home a run in the first inning of Saturday's Giants/Dodgers game -- significant because it was the first run the Giants had scored since May. But someone in the Dodgers' dugout was paying attention. Pablo Sandoval was listed as the #3 hitter on the official lineup card, yet it was Posey who actually hit third. So the runner was sent back to second, Sandoval was called out, and Posey got to hit again. The Giants ended up not scoring in the inning.

Video evidence of the sordid affair:

Sandoval was called out even though he never went to the plate. He also swung at the lineup card.

The most interesting part of the whole snafu was that Mattingly got to lawyer Bruce Bochy upside the head. In 2010, Bochy forced the Dodgers to remove their closer after Mattingly improperly answered a question from James Loney. It must have felt pretty danged good to Mattingly when he went out there.

Bochy took the blame for this one:

As Posey stepped in for the phantom at-bat in the first inning, Bochy turned to bench coach Ron Wotus.

"I said, ‘We just hit out of order,’" the manager said. "You’re hoping they don’t notice it. … In the middle of the at-bat, I was questioning if I was losing it."

It was surreal to see a run wiped away and Posey sent to the plate again, to be sure. But when Bochy didn't come out of the dugout to argue … you knew someone done messed up. It didn't really matter as the Giants heroically banded together to score runs later in the game, but it felt like a low point for a team that can't score a whole lot right now.

Gerald Laird couldn't believe it, and we all got to live vicariously through him as he tore into Hernandez. Retired gadfly and ne'er-do-well Chipper Jones also had opinions:

I will not watch a game, any game, officiated by Angel Hernandez! His incompetence amazes me and I'm tired of MLB doing squat about it! Nite

So how far off was Hernandez? 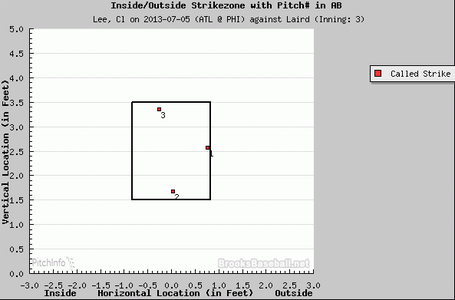 Oh. They were all strikes.

The sub-heading stands, of course. Because of reasons:

Joakim Soria is back

The Rangers showed off a deadline deal that wasn't, as their calculated gamble from the offseason appeared in his first game with his new team. Joakim Soria used to be one of the very best relievers in baseball, but he needed Tommy John Surgery before the 2012 season and the Royals let him go. Soria threw 11 pitches, seven of them for strikes, and he averaged 91 m.p.h. on his fastball -- pretty close to what he was throwing in his prime.

A few teams will give up good prospects to get a reliever this deadline. The Rangers gave up money last winter instead. And to recap the bad-team-trading-a-closer standings:

Royals never ever ever trading Soria because they needed to protect the leads in 30 or 40 of their 65 wins: Bad

Pirates trading Joel Hanrahan for Mark Melancon, while also installing a replacement who ended up being even better: Good

Ricky Nolasco is on the Dodgers now

The Dodgers traded three arms for Ricky Nolasco, but it's probably not right to call them prospects. The Dodgers shipped off a 23-year-old, a 25-year-old, and a 26-year-old, and it's not like any of them had a statistical pedigree. They're three hard-throwing raffle tickets.

Could the Marlins have held off and got teams into a bidding war closer to July 31? Probably. There just aren't going to be a lot of starting pitchers on the market, so the Marlins had some leverage. But by getting the Dodgers to absorb Nolasco's contract right away, the Marlins saved about a million dollars. Clearly that was the priority.

Now's a good time to think back to 18 months ago when the Marlins were trying to sign Albert Pujols and Prince Fielder.

Of note, here's a list of the starters since 2009 with more than 100 starts, ranked in reverse order by ERA+:

So maybe the Marlins were right to take the money and live arms and run before Nolasco came back to terra firma.

A baseball player said this

"I was just coming out of the dugout like I normally do," Buck said. "Then all of the sudden I felt like I had a big wiener over me."

Manny Machado did this

I've watched it 10 times. I have no idea how he got enough on the throw. It wasn't a Molina running, either. An absolutely remarkable throw.

Can Luis Cruz believe it? 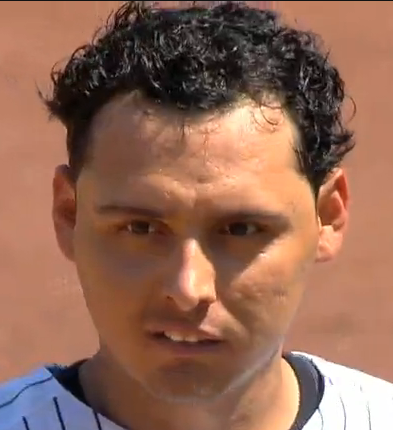