C.J. McCollum's unconventional path from Lehigh to the lottery

How does a combo guard from a place like Lehigh become an NBA lottery pick? For C.J. McCollum, it was all about remembering where he came from.

Share All sharing options for: C.J. McCollum's unconventional path from Lehigh to the lottery

LAS VEGAS -- Even when he was at Lehigh University, C.J. McCollum always acted like a pro. More talented than his teammates, McCollum knew that if he wanted to be the first Mountain Hawk to make it to the NBA, he'd have to work longer and harder.

It was late one night when Lehigh assistant coach Ryan Krueger found McCollum working on his game. He was using a machine called The Gun, a contraption placed under the basket that gobbles up rebounds and spits them back out, allowing players to keep moving and shooting. This sort of solo session was typical of McCollum after dark or early in the morning.

"That happened so many times I can't even remember," Krueger says.

When McCollum arrived at Lehigh's freshman dorms in the fall of 2009, he got out of the car wearing his GlenOak High School gear. The next thing his future teammates knew, they were in the gym. It was roommates vs. roommates: McCollum and big man Gabe Knutson versus small forward Holden Greiner and point guard Ryan Peters. The latter tandem took the loss.

"He's a guy who just wants to be in the gym and draws people into the gym," Knutson says. "That was my first impression. He was skinny, though. You can quote me on that. He was skinny, he was like 160, like 165. He was a rail."

Krueger fondly remembers McCollum showing up as an unguardable "little guy" who could shoot and make things happen off the dribble. After countless extra hours in Lehigh's Stabler Arena -- some with teammates, some with Krueger, some with no company but The Gun -- he became more polished and efficient. His peers noticed, which is why they didn't mind McCollum getting the vast majority of the accolades and shots.

"We know that he's the guy that's worked out the most, hitting the most shots," Knutson says. "Yeah, he could take bad shots here or there but when he's said to me specifically and to other teammates, ‘I'm not going to pass you the ball because you don't stay after practice and shoot as much as me. I would rather a contested shot because I've worked on it more than you have.' When you hear that, you're kind of like, oh shit."

McCollum wasn't being a bully. This was his way of motivating and encouraging guys to stay late with him. Long before McCollum had even heard of Lehigh, his brother, Errick -- now a professional who has played in Greece and Israel -- woke him up in the morning to get to work. By the time he made it to college, he didn't need anyone pushing him.

At first his dedication paid dividends quietly. Out of the public eye in Bethlehem, PA, when he fearlessly announced his presence on a national stage, it looked like he came out of nowhere. McCollum led the Mountain Hawks to an unforgettable upset of the No. 2-seeded Duke Blue Devils with a 30-point, six-assist, six-rebound performance in the first round of the 2012 NCAA Tournament. He came close to declaring for the draft after that, but decided he'd work on his game at Lehigh for one more year.

Only an injury could keep him out of the gym. 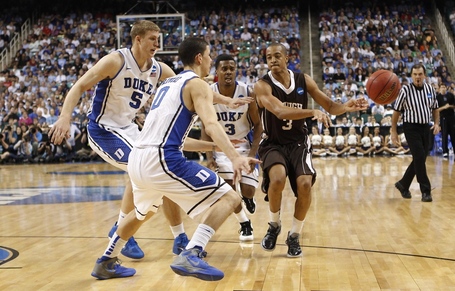 Nine months after the breakout came the setback. Twelve games into his senior season, McCollum broke the fifth metatarsal bone in his right foot. He was averaging 25.7 points per game and his team was expecting to win another Patriot League championship and return to the tourney.

"My initial thing was just worrying about him looking for tall buildings," Krueger says. "Because him not playing basketball is just unacceptable."

McCollum handled the broken foot the same way he approached everything on his path from Lehigh's campus to the NBA: with maturity, confidence and a sense of purpose. Before Krueger could seek out his star to dispense some advice, McCollum came to his coach.

He wanted to talk about ways to improve while out of action. McCollum spent the rest of the year watching tape of his old games, studying point guards like Chris Paul, Steve Nash and Jameer Nelson and strengthening his upper body.

When McCollum wasn't obsessing over his craft on the court, he was focused on his other major area of interest. He wrote for student newspaper, The Brown and White and served as the assistant sports editor. When he returned to Lehigh for his senior year, McCollum explained in a piece he penned for The Sporting News that it was partially because he promised his mother he'd get his degree in four years.

"I'm not just a dumb basketball player who got lucky and graduated from college." -C.J. McCollum

"I'm not just a dumb basketball player who got lucky and graduated from college," McCollum says. "My ratio for professor to student was nine-to-one so it wasn't like I wasn't going to class. I was going to class every day."

It shouldn't surprise that McCollum is so savvy with the media and comfortable in front of cameras. No one at Las Vegas Summer League held longer postgame scrums, no one answered questions more thoroughly. With that comes a price: constant interview requests, much more than he ever had in college.

"I majored in journalism so I understand the requirements," McCollum says in an interview at the NBA Summer League in Las Vegas, smiling. "But it's a little different."

Making it to this level as the No. 10 pick in the draft means all sorts of additional scrutiny and McCollum is acutely aware what's written about him. "I read it all," he says, and sometimes he'll share and discuss it.

Less than 24 hours after being featured on ESPN.com at summer league, he ran into the writer at the Thomas & Mack Center. McCollum told him he liked the story, then jokingly brought up the fact that his max vertical leap measured just shy of Portland Trail Blazers teammate Damian Lillard's. In the piece, Lillard was described as more dynamic.

"You guys control how we look," McCollum says. "We can blow you off and you can make us look bad."

As a 6'3 guard who spent four years at a small school and broke his foot, comparisons to Lillard are inevitable but insufficient. While McCollum will be Lillard's primary backup at the point guard spot, they'll also play together with McCollum off the ball.

There's evidence of McCollum calling himself a combo guard dating all the way back to when he was an Allen Iverson-loving 5'11, 150-pound high school junior. Balancing his instincts as a shot creator with getting his teammates involved will be his biggest challenge. Summer league functioned as a testing ground for McCollum, where he got reps running the team in a setting where he could afford to make mistakes. 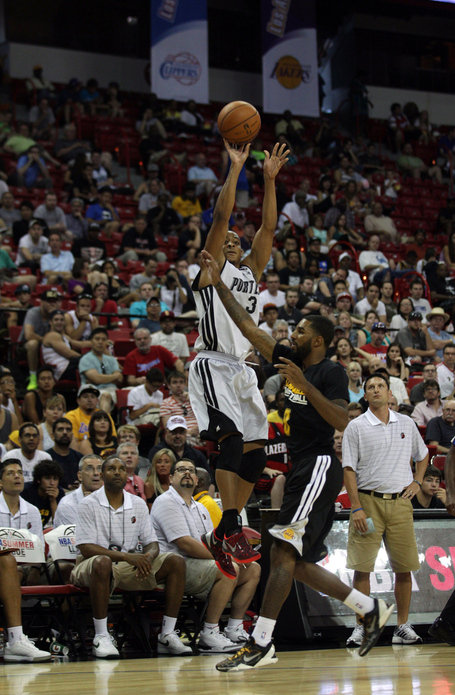 Only one player averaged more than his 21 points per game in Vegas, but McCollum also averaged 20 field goal attempts, a full three more than anyone else. In his own words, he had "great moments" and "terrible moments." After shooting 49.5 percent from the field and 51.6 percent from the three-point line last year before his injury, McCollum knows his shot selection wasn't always optimal with the summer squad.

Spending most of his time playing the point, he took his lumps as he averaged 3.4 assists and 3.6 turnovers per game. McCollum demonstrated his desire to take big shots but didn't dominate like last year's co-MVP Lillard did.

"It's obvious that he's a very good player," Blazers assistant coach David Vanterpool says. "It's also obvious he has a lot of things to learn, especially playing the point guard position on this level."

Vanterpool loves McCollum's talent, his hunger and his devotion to film study. He also likes that McCollum is always asking questions, calling it a, "sign of someone who wants to be great." Yet Vanterpool also knows the danger of placing impossible standards on young players.

"I want people to really temper their expectations for C.J.," Vanterpool says, referencing the fact that only Lillard, Iverson and Oscar Roberston have registered 1,500 points and 500 assists in a rookie season. "If anybody expects C.J. to come in and be anywhere close to that, that's not even a fair expectation at all."

After Portland's last contest in Vegas, McCollum dealt with one final media horde. Asked to assess his week, he said it went okay, then added that he doesn't put much stock in what happened there. After all, McCollum noted, Derrick Rose struggled in summer league.

Sounding like a 10-year-vet and not a 21-year-old rookie, McCollum talked about working on his paint game, eating right and preparing for the season. He said he was looking forward to going home to Canton, OH and then spending some time at Lehigh. Everything about the last few months has been new for McCollum, but there's no need for him to change course.

He's just following the path that took him here.