What to root for in the Alex Rodriguez and Biogenesis case

Because going back in time and stopping A-Rod's parents from meeting isn't an option. Yet.

Share All sharing options for: What to root for in the Alex Rodriguez and Biogenesis case

I just spent an hour on TV Tropes. If you don't know what TV Tropes is, run away. It will suck you in, masticate the life force out of you, and spit out the husk. If I had a tablet that could only connect to TV Tropes, Wikipedia, and Baseball-Reference.com, I'd never leave the bathroom. Just slide the pizza under the door, honey, I'll be out in a second.

But I was there on official business. I was trying to find the right pop-culture trope for Alex Rodriguez. Is he the Sheltered Aristocrat? The Rich in Dollars, Poor in Sense? It's on the tip of my tongue. Alas, I'm not sure if I'll ever find it. He is, simply, out of touch and oblivious. And he employs a team of gibbons that give him awful advice on what to do and what to say, time and time again. It's a bad combination.

A-Rod used to be Mike Trout. Think about that, the idea of Alex Rodriguez representing everything compelling about the sport -- a fascinating, historic talent above all others. Now he's somewhere between a super-villain and a really, really annoying seat-mate on an airplane that you can't escape.

Major League Baseball is clearly leaking the idea of a lifetime ban. T.J. Quinn of ESPN has been doing most of the serious reporting, and he's using unnamed sources to come up with news like this:

Several sources have told "Outside the Lines" that some MLB officials have pushed for a lifetime ban, saying they would rather force Rodriguez to defend himself than agree to a suspension that allows him play while he appeals.

It sounds super scary, super serious, and it is. A lifetime ban. There have been more people banned than you might think, but clearly A-Rod would be on the Mt. Rushmore of banning with Joe Jackson and Pete Rose. I don't think we've really appreciated how stunning it would be.

So let's look at the possible outcomes and grade them on how awful they would be.

Scenario #1: A lengthy, protracted battle between A-Rod and MLB

This would be worse.

And what if he escaped punishment? What if Alex Rodriguez somehow found a Ryan Braun-size hole that he could squeeze through? That would be amusing! But ultimately awful. Still a 10 on the awful scale.

Alex Rodriguez wandering the halls of baseball for the rest of his life. A phantom, an apparition. There would be a sad fascination with him. When the writers start voting players like Barry Bonds and Roger Clemens into the Hall of Fame -- and they will -- there would be constant "Should baseball reinstate Alex Rodriguez?" articles and debates. Rodriguez would be an eternal symbol of how everything was awful in the Steroid Era (even if everything most certainly was not awful.)

This is before you get to the part where the Yankees would suddenly be free from Rodriguez's ridiculous salary, which would allow them to Dodger up the free-agent market again. Buck Showalter is ticked at the idea, and I don't blame him.

Also, the worst part about this scenario? You still get the years-long battle from Scenario #1. I had this one as a 10 before I realized that, but now it goes up to 11.

Rodriguez is still a pariah. While I've felt the scrutiny and anti-A-Rod fervor over the last decade has been completely overblown, if he really did explore the idea of buying the incriminating documents, he needs to go down in flames. A lifetime ban would be awful, but possibly just. The possible obstruction is something that transcends the steroid witch hunt. That's on its own tier of wrong and stupid. Steven Goldman made the comparison to Richard Nixon and Watergate. It wasn't the burglary that brought Nixon down, it was the wrong and stupid that followed.

But the compromise that MLB wants is middle-of-the-awful. The punishment would still be historic, a deterrent to future scofflaws that would resonate for years. No one gets a season-long ban. Not for getting an umpire in a headlock, not for smoking steroids in the dugout, and not for setting a ballpark on fire. Rodriguez would still be a cautionary tale. 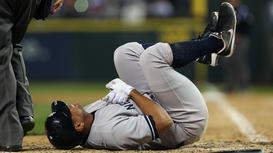 MLB has already finished him, he just doesn't realize it yet.

It still gives the Yankees a Get-Out-of-A-Rod-Free card for an offseason, but they're still on the hook after that. Rodriguez's chances at the home-run record take another blow; if it's embarrassing for Barry Bonds to be atop the record book, imagine how MLB would feel about Rodriguez.

I've tried to plug my ears and ignore this story for long enough, but with the trade deadline over, it's unavoidable. But it's nothing compared to the attention that would be paid to the story with a protracted battle or a lifetime ban (followed by a protracted battle). So cross your fingers and hope that the gibbons type out Hamlet on this one, making the right decision for the first time in A-Rod's career.

It's silly to say that "everyone wins" in with a compromise, but at least everyone loses a little bit less.