The Next Yasiel Puig

Or not. But Jose Abreu will make a boring offseason less boring.

Share All sharing options for: The Next Yasiel Puig

It's late. You drifted off during a rare showing of The Shawshank Redemption, and now infomercials are playing.

"Do you want a Yasiel Puig for your team?" the announcer asks.

"For five installments of $18 million, your team can have one."

Well, dust off the potato-chip crumbs and get your wallet. You sorta have to have one of these. A picture of Jose Abreu flashes on the screen. Good gravy, what is that uniform? 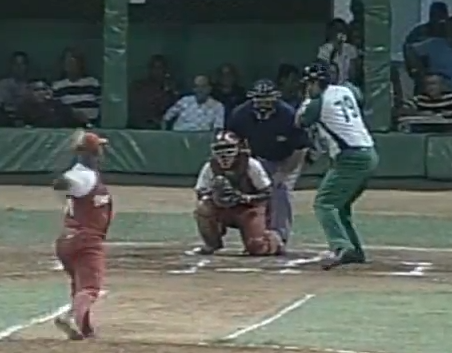 But just as you start to doubt what the infomercial is selling you, here comes the mention of Puig again. Maybe he's the next Yasiel Puig, you ever think about that? Just because they're completely different players with different skills, they're from the exact same country. Just like Joey Votto and John Axford, who are pretty interchangeable. When you put it like that ... and wait, there's video:

According to Baseball America, though, scouts are pretty divided on Abreu:

Abreu is an intelligent hitter without a lot of effort in in his swing and the power to hit 30-plus homers in a season. He has an unorthodox setup with a double toe tap in his stride, and some scouts consider his bat speed only fair, which (skeptical scouts) believe makes it hard for him to catch up to good velocity on the inner third of the plate.

The infomercial didn't mention that. But Jonah Keri chips in with a feature from 2012 that helps renew your faith:

"I don't know that I'd name him the 'best hitter in the world' based on a 60-game performance," said (Clay) Davenport. "But yes, I'd say there's a chance."

Except here's a controversial statement: Dude's probably not Yasiel Puig. I know, I know, the informercial was a little deceptive. I feel taken advantage of, too. In fact, Abreu is something we haven't seen before. Think of the Cuban defectors of note over the last few years.

Yoenis Cespedes was something of a Puigquel -- an exciting player who got us jazzed for the feature presentation. And Cespedes is struggling a bit with the bat, falling short of his 2012 numbers. But he's still the tremendously athletic, raw, power-loaded player he was last year. He's good enough at the other parts of baseball to have value even when his OBP is under .300. The same description would apply to a struggling Puig or Leonys Martin. Even if they're not hitting, they're helping.

Dayan Viciedo was 20 when he joined the White Sox, which means he was an unformed lump of prospect clay. Kendrys Morales was 22, so a little more set in his ways, but both of those players were more like first-round picks than win-now acquisitions. Puig fits in this category, too.

The 26-year-old Abreu fits in neither of those categories. He has nothing in common with Cespedes, Puig, or Morales other than the mystery of evaluating Cuban players. Abreu is a completely different style of player. A ... why, hold on, he's a lumbering slugger. Yes, a lumbering slugger. And we certainly haven't seen one of those make the transition.

With Puig and Cespedes, there was a higher floor because of their overall athleticism. With Viciedo and Morales, interested teams could (hopefully) count on their organization to iron out the kinks. With Abreu, either he hits, or he stinks. There's no middle ground. There probably isn't a lot of room for development. If he can't make contact, he's Mark Reynolds on a huge deal. There aren't any safety nets of athleticism.

Even if there is absolutely no reason to think of Puig's name in the same sentence as Abreu's, you won't be able to help it. Puig was an unknown who destroyed Cuban pitching. So was Abreu. Puig hasn't failed as a major leaguer yet. Neither has Abreu. His ceiling is limited only by your imagination. And in the offseason, your imagination is going to be on overdrive, especially if the alternative is the useful-but-sorta-boring Mike Napoli. You know that guy's likely ceiling. But Abreu's ...

He could be the next Puig. Which makes as much sense as saying Zack Wheeler could be the next Mike Trout. But even though you're shouldn't think of Puig at all, he's become shorthand for "a baseball player I didn't know about last week, who could be a superstar I want on my favorite team." Abreu comes with a little more risk, perhaps. But get ready to ignore all that. It takes just two teams to start a bidding war, and I'll bet Abreu's contract shatters the record for a Cuban hitter.

• Which team is baseball’s best?

• Sizing up the Cy Young races