If I know you, you spent your weekend watching preseason football, you rascal. You woke up behind a Fuddrucker's covered in buffalo sauce and wearing a Rick Mirer jersey, not sure how got there. Don't worry. It's happened to all of us.

But, if I might be so bold, how dare you cheat on baseball this late in the season. And for preseason football? Oh, the shame. Luckily, I don't hold any grudges. You can still come along with us and see what happened in baseball over the weekend. No questions asked.

Okay, maybe not a malcontent. Maybe he was really, really messed up with his mechanics. Let's reconstruct this as best as we can:

You never want to sprain your Ankiel. After walking the leadoff hitter, Strasburg threw three pitches that didn't come close to anything, much less Andrelton Simmons. It was so out of place, Davey Johnson had the same reaction everyone watching did:

"The first thing I said when we were both in here was 'Are you hurt? Is something wrong with you?' " Johnson said. "He said 'No. I'm just out of sorts.' "

Fredi Gonzalez didn't think Strasburg was head- or back- or butt-hunting, either:

But instead of the story being Strasburg's Blassening, the umpire had to toss the right-hander. In a sport where umpires huddle around and discuss the intent of fielders and runners when they obstruct each other around the bases, it seems odd the umpire was forced to exercise the warning even if it was clear that Strasburg was struggling. Almost makes it seem like … like … the idea behind automatic ejections are silly. To the umpire's credit, he could have tossed Strasburg after the second wild pitch, but didn't.

Regardless, I'm setting my phone's alarm for Strasburg's next start. If he has a clean first inning, great. But I never thought he would have exhibited those kinds of control problems, so I'm dying to see how he does in his next outing.

Starlin Castro is a dingus

Turns out, he's pretty good at this dingus stuff. He did this over the weekend. A GIF's not going to do; you have to hear the incredulity of the announcers. Some questions I have have:

Was Jon Jay tagging because he knew it was Castro catching the ball?

What's the deal with the umpire calling the infield fly when the ball was six inches from the mitt?

Was that a smart play by Jay? A non-dingus gets him by plenty.

Forgetting the questions, though, you can kind of understand why Castro's guard was down. It barely left the infield, and the infield fly was called. Still, Castro sat on the bench the next day to think about what he'd done. Which is commit an offense known as "being Starlin Castro." He's the Manny Ramirez of our time. Just give him a few years. 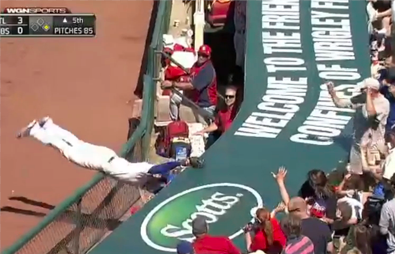 Well, that's one way to cleanse the palate, Cubs fans. If you want the GIF, it's here, but I prefer the still. It's like there's a black hole on the mound, sucking everything into its space-time distortion. And if he were getting sucked into a black hole, that's literally what we'd see: no movement at all. He'd experience it in real time, but to us, it was like he wasn't moving at all. Beautiful, in a way.

Or maybe he's getting sucked into the maw of a giant, yonic space squid like at the end of ... well, I won't spoil it. But maybe it's like that.

The Dodgers lost a game

Is Don Mattingly's job safe? No one is saying. But the Dodgers lost a game to the Phillies on Sunday, dropping them to 0-1 over their last one game. The .000 stretch ties them for the worst streak in baseball history (min. one game), and there are certainly questions they have to answer.

Even worse, they lost it on a double-play grounder that wasn't. Hanley Ramirez kicked a ball, and the Phillies walked off.

Worse, the Diamondbacks won their game on Sunday, pulling them within 7½ of first place. With the Dodgers stumbling like this, are drastic changes to follow? Possibly. They can't help but look across the field and see the Phillies playing undefeated ball on the Sundays since hiring Ryne Sandberg as their manager.

The price of the R.A. Dickey trade, d'Arnaud was the #23 prospect in baseball according to Baseball America before the season, but he's been hurt for most of the season. He had 105 at-bats across three levels to get ready, and he made his debut over the weekend, catching Matt Harvey, and giving Mets fans a glimpse at the beautiful rainbow at the end of Hurricane Wilpon.

Small samples abound, but you have to like this trend for d'Arnaud:

So far in his major-league debut? Hitless in four at-bats with four walks.

Easy there, big fella. That's a bit of an overcorrection. That's like when I started running five miles the day after committing to an exercise regimen. I pushed myself so hard that I was dipping my Choco Tacos in my glass of bourbon before the sun went down. I'm assuming baseball players are like that with plate discipline, too.