Andre Drummond's sustainability, the oversupply of pick-and-roll talent and more

Can Andre Drummond rebound and protect the ball like he did as a rookie? We'll find out. Plus lots more in The Hook.

Share All sharing options for: Andre Drummond's sustainability, the oversupply of pick-and-roll talent and more

In our tremendously hopeful Top 100 of 2017 project, Jonathan Tjarks picked Andre Drummond at No. 3 overall. Yes, Tjarks believes that Drummond can be better than Derrick Rose, Stephen Curry, Russell Westbrook, Kyrie Irving, Anthony Davis, Kevin Love and everyone else not named LeBron James or Kevin Durant in 2017. Which is only four years from now. Is this as insane as it seems?

I quite enjoy Drummond, and he was No. 3 on my imaginary Rookie of the Year ballot. He was No. 1 on my Rookie Twitter ballot.

Going to the @KidRock concert tonight!!

I think he should have been a higher pick than No. 9 in that draft, and I was admittedly torn about the prospect of my Kings taking him. In retrospect, dear Lord, why didn't the Kings take him?! But by projecting him so high four years out, you have to put a tremendous amount of faith in his rookie production being sustainable. I don't know if I can buy all of that.

To be sure, Drummond will improve in certain areas, like shooting. He hit 37 percent of his free throws. That has to get better. It'd be shocking if that didn't improve heavily. At the same time, his mid-range shooting should become something approaching normal. As in, not this. 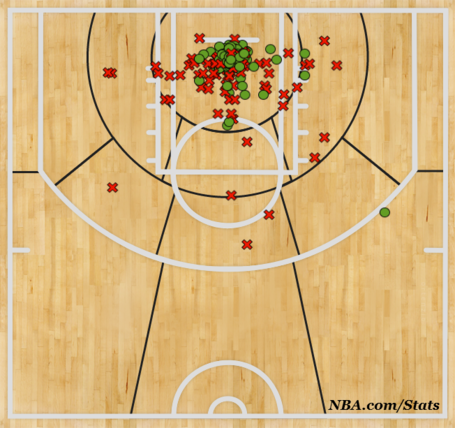 That stuff will improve, and Drummond's already solid defense will get more sound, especially with another shot-blocker in Josh Smith on the court.

I'm skeptical of two pieces that made Drummond's rookie season so spectacular, though: his elite rebounding and his lack of turnovers. Last season, Drummond snared 15.4 percent of his own team's missed shots, one of the best marks in the league. Drummond should remain a strong rebounder throughout his career: he's agile, long and tough with massive hands. But the level of offensive rebounding Drummond provided last season is typically not sustainable for players not named Reggie Evans, Dennis Rodman or Moses Malone. Evans is the only current player with multiple seasons above a 15 percent offensive rebound rate. Kenneth Faried is a good example of a player who was extraordinary on the offensive glass as a rookie (16.5 percent) only to dip down to very good in his second season (13 percent). That could happen to Drummond on both ends. (He was an outrageous defensive rebounder, too.)

Could Drummond be the NBA's best center? 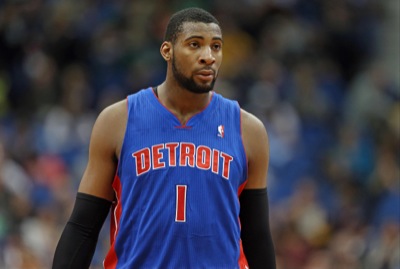 Detroit Bad Boys suggests it could happen next season.

The most unbelievable thing about Drummond as a rookie was his low turnover rate. He didn't touch the ball as a threat to score a whole lot, but still. For a young, raw big man to have a turnover rate of 12 percent is totally unexpected and a huge boon. For comparison's sake, Dwight Howard's turnover rate has never been lower than 15 percent.

This isn't to say that Drummond won't continue to rebound like a madman or protect the ball in future seasons. It's just that those figures seem unsustainable, and so it's quite possible that gains made elsewhere in his game could be countered with something more approaching sanity in these categories.

That's why I'm not convinced Drummond is the second coming at this point. We need more time to see it.

Jonathan Abrams has a predictably wonderful piece on the legacy of Jonny Flynn, who is basically outside the NBA at age 24, four years after being the No. 6 pick. Flynn is underrated as a recent draft bust; his draft classmates just finished up their rookie deals. One of (many) things that struck me in Abrams' piece was Al Jefferson talking about how good Flynn was in the pick-and-roll in Minnesota as a rookie.

"When Kurt [Rambis] took the job, he said he was only going to use a little of the triangle," [Al] Jefferson said. "But once he got in and took over that's all he used. It was tough for me because we didn't have 3-point shooters ... We had the right type of players for another system like a pick-and-roll system. Jonny Flynn could have been one of the best pick-and-roll point guards in the league. He was so deadly in the pick-and-roll, but as far as the offense we were trying to run, I didn't think it was the right system for us."

Now, Rambis and assistant Dave Wohl soften Al's statements up in Abrams' piece; Rambis estimates the triangle was used only 20 percent of the time. But Jefferson's had a lot of point guards over his career, including Rajon Rondo, Deron Williams and Devin Harris. And if he claims Flynn could have been a spectacular pick-and-roll point guard, I tend to believe him.

The question is how valuable being a superlative pick-and-roll guard really is these days. Or more than valuable, rare. Isaiah Thomas, for example, is really quite good running a pick-and-roll. The Kings have brought in a free agent point guard to try to replace him in each of the past two offseasons (Aaron Brooks, Greivis Vasquez). Jeremy Lin is noted for his pick-and-roll stylings. He was waived twice before really making it in the league. Over the past decade, the league has rediscovered the pick-and-roll (at the expense of isolation and back-to-the-basket post play, possibly). Young point guards see that and emulate it. So you have a whole crew of really solid pick-and-roll point guards.

Therefore, being able to run that staple well is no longer a differentiator: it's an entry requirement. When a player runs it well but struggles in other areas (playmaking, defense, shooting) as Flynn did, it's not enough.

There are other lessons from Flynn's story we should carry on. Specifically, about David Kahn thinking Flynn and Rubio could be a new Monroe and Frazier, about Kahn pushing Flynn into the rotation too soon after surgery to repair the guard's torn hip labrum. Basically, about David Kahn being the worst. But the actual lack of scarcity as it pertains to Flynn's skills strikes me as something with wider implications.

Charley Rosen's blast from the past

There's not much to say about Charley Rosen's incomprehensible anti-stats rant on Hoopshype other than this: much of what Rosen argues for isn't the abolition of stats, but a plea for better stats. The twist is that a lot of the stats he's asking for already exist. For example:

Yet even as Sabermetrics has become the latest craze in the NBA (as per the recent hiring of the stat-crunching John Hollinger by Memphis) there are many fallacies in this way of evaluating basketball players. The primary one being that most statistics tally what happens when a player wither has the ball in his possession or is in close proximity to the ball. Since there are 10 players on the court, 80-90 percent of the game is ignored.

This would have been a valid complaint as recently as, say, 2004. But plus-minus is widely available at this point. And it's intent and real sole purpose is to cover what happens all 48 minutes long for all players.

Moving on to rebounds... Since poor-shooting teams miss more shots, their big men have many more opportunities to snatch offensive rebounds. Conversely, the bigs on running teams and those loaded with sharpshooters are rarely among the league leaders in this category.

Unless you're Charley Rosen.