The most surprising players in baseball (both good and bad)

In which we attempt to build teams of surprising players, both of the successful and unsuccessful variety.

Share All sharing options for: The most surprising players in baseball (both good and bad)

Seemed like a silly non-sequitur or inside joke. Except, let's go to the nerd numbers.

Those are rounded, so Byrd hasn't been exactly twice as valuable as Upton, but Byrd is probably having the better season. Which is insane. Byrd started last year with the Cubs. He was 3-for-43 with no extra-base hits and one walk. He finished last year with the Red Sox and was scarcely better. Now he's 35 and having the best season of his career, even though he should probably be out of the game. This is, as the kids say, counterintuitive.

So it's time to look for the Cognitive Dissonance All-Stars and Not-Stars at every position. Let's find the non-stars who are having a better season (by WAR) than a name-brand star at the same position. The Marlon Byrds over the Justin Uptons, in other words.

Okay, catcher defense is a tricky thing. Folding it into a one-stop number like WAR, especially for a partial season, is asking for trouble. I'd bet that Santana has been more valuable, slugging almost 100 points more over 131 more at-bats.

But if you don't want to use Santana, you can use Brian McCann (3), Salvador Perez (2), A.J. Pierzynski (2), Carlos Ruiz (1), Matt Wieters (1) or Alex Avila (0). Castillo might not be a four-win catcher, but he's having a better season than most of those guys.

Dammit, Brian. Quit screwing around with my … wait, Brian Dozier isn't a former college roommate crashing on my couch until he gets back on his feet. He's a baseball player. For the Twins. And he's having a magnificent season. The raw numbers aren't that exciting, but the 26-year-old has a 98 OPS+ and excellent defensive numbers. His minor-league numbers were quietly interesting, so maybe he can keep this up.

Before the season, I asked politely about the Twins' projected shortstop, mostly because I hadn't heard of him before. Turns out he's a limited offensive player with a good-enough glove to make himself useful.

If I were doing a middle-infield power ranking before the season, the Twins would have been 29 or 30, depending how down I was on the Marlins that day. Instead, they've been solidly above-average. I'll bet if baseball got to play catch with its dad more, it wouldn't be such an attention hound.

There's precedent here, too. Uribe usurped Sandoval from the third-base job for the Giants' championship run in 2010. Both are on the fluffier side, and both of them just swung at the tittles in this sentence. That's an "L" in tittles. An "L."

One of the more surprising parts of the Dodgers' ludicrous stretch of baseball has been the performance of role players like Nick Punto and Skip Schumaker. Uribe is right up there, too. It's a wonder he wasn't released after last season, just as it's a wonder that Don Mattingly wasn't fired early this year. What looked like unearned patience now seems like cagey prudence from the Dodgers.

This is a bit of a tricky category, as there are only four left fielders over two wins this season, and the only surprise is Domonic Brown, who shouldn't be that much of a surprise. So you have to go with shock value, and McLouth does that.

The stats hate, hate, hate Matt Holliday's defense. But that's okay, so do your eyes. Holliday's .283/.367/.452 line doesn't look bad at all, especially in a low-offense league, but that's how bad DRS hates him. He's below Andrew Brown, Junior Lake, Matt Tuiasosopo, Rajai Davis, and Raul Ibanez, if you were wondering. That's right, Holliday and Ibanez have nearly identical OPSs, but Holliday grades out as the worse fielder. Amazing.

To be fair, FanGraphs and UZR give him an extra win, but being fair is overrated.

The Mets were supposed to have a hilariously inept outfield. And Lagares is hitting .258/.286/.394, which isn't exactly good.

You know what? Do-over. I trust Lagares's WAR as much as I trusted Darwin Barney's last year, and Barney is near the bottom of all second basemen this year.

It's not a surprise that Rasmus is putting together a nice year, but it's a surprise at just how nice a year it's been.

Nonsense. Complete nonsense. Also, why is Byrd still on the Mets? You trade that singing frog before he gets the chance to embarrass you in front of a Broadway producer. I'd love to know what the best offer for Byrd was. Probably just a C-prospect, but still. Marlon Byrd! He's just a couple years younger than Marlon Anderson, for perspective.

Jeff Francoeur and Delmon Young were both 10 times likelier to have Marlon Byrd's season than Marlon Byrd.

Also, Francoeur and Young were the very worst right fielders in baseball this season according to this search. Maybe I had one of the settings wrong, lemme try again.

Most of the players in the first group are coming back from an injury, so maybe the expectations should have been a little higher. Still, look at the names in that last group. Lots of All-Star appearances, there.

Really, this whole exercise was an excuse to do this:

Forty wins. The team of Welingtons and Florimons would have been almost 40 wins better than the All-Star team to the right. That's the difference between 100 wins and 100 losses.

Baseball is basically Dr. Manhattan, and here's what it feels like: 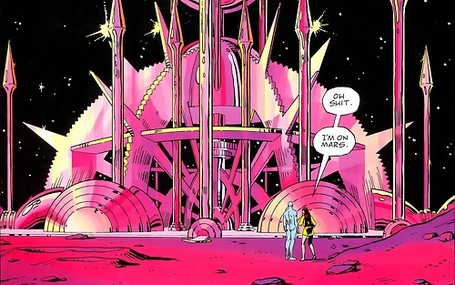 Yep. Good work, baseball. You got us. Again. You'd think we would be used to this by now, but we really aren't.

• When Ryan Dempster did the impossible: He made us cheer for Alex Rodriguez!