Following in the footsteps of the esteemed Jon Bois, I attempted the first trans-Pacific Supperjump. Here's how I fared at the world's saddest sport.

Last month, the world's favorite person (Jon Bois) created the worst and saddest sport in the history of mankind. Said sport is known by the glorious name of Supperjumpin'. You may be familiar with the logo of the world's newest sport.

The sport, like all great sports, is simple. Just like baseball, or the pentathlon. So simple that a baby could do it ... provided, that is, that the baby hates itself and its body and shows a callous regard for the world in general and personal finances in specific. Why is that baby so sad? No one knows.

Supperjumpin' is as follows: you order a food item at a restaurant and eat it at another restaurant. That's it! You can adjust the level of difficulty all the way from getting fries at a Carl's Jr. and walking them into the McDonald's in the same food court, to getting a Pizookie from B.J.'s in San Jose and eating it a month later ON THE MOON (I mean, if NASA is cool with that).

The point is, once I read of Jon's masterstroke (and realized I had a trip coming up), I knew that I had to be part of Supperjumpin'. I've done stupid things before in the name of eating challenges. A fun, stupid thing here and there or an agonizingly stupid thing for charity so I was basically born to Supperjump.

I took a vacation to Hawaii last week. Specifically, I visited the island of Kauai, which is the farthest island in the state that actually has stuff on it. Way to go, Manifest Destiny! I knew that on the return trip, I would have a multi-hour layover in Honolulu, on the island of Oahu, before traveling back to LAX and then on to home.

So my plan was to do a THREE-LEGGED SUPPERJUMP that would take me all the way from a small island in the Pacific Ocean to a city where every person is their own, sad island. Leg one: Supperjump on the island of Kauai. Leg two: Supperjump from Kauai to Oahu. Leg three: Supperjump from Oahu to Los Angeles. How did it go? 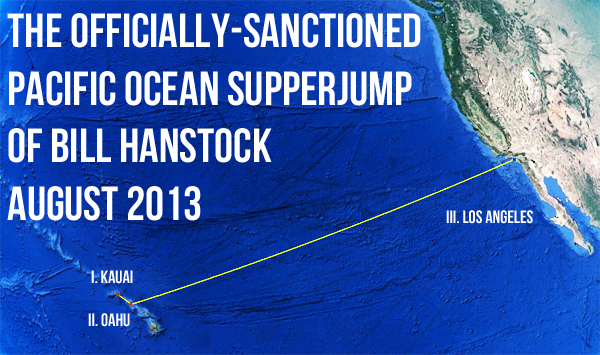 I obtained a Hawaiian islands-exclusive McDonald's menu item called a Haupia Pie. It is like a McDonald's Apple Pie, except it is not really like that at all. I bought said pie at a shopping center in Lihue, Kauai.

It was at that McDonald's that I learned there is ANOTHER Hawaii-exclusive McDonald's item. The menu listed something called "saimin" for $2.39. I asked what that might be and was given the reply, "It's noodles." My mind churning, I thought that might be a fine subject for Supperjumpin' to Oahu. McDonald's noodles! Can you believe such a thing?

So I stopped at a different McDonald's later that day, in a different part of Lihue. There, I purchased a McChicken sandwich and an order of "saimin" (pronounced sai-MEEN).

When I opened the bag that contained chopsticks, a packet of soy sauce and the item in question, I unfortunately learned that this is what McDonald's saimin is. It's a noodle soup, closer to "udon" than to "noodles." Obviously, this would not do for Supperjumpin'.

Luckily, I still had the McChicken so onward we traveled to the Lihue Airport on Kauai, where I found a Starbucks, completely forgot the name "Haupia Pie" and completed Leg One of the Supperjump.

The Haupia Pie is inoffensive and it was, amazingly, still warm. Score: 7/10, would eat again.

After a short flight to Oahu (when you take off, they give you a "cuplet" of guava juice, they collect the cups and then you land), it was a bit of a hike to the terminal for the flight to Los Angeles. This part of the terminal had only one restaurant open: a Gordon Biersch. This particular Gordon Biersch had only one waitress and one cook working(There was also a bartender, but I would definitely not classify what he was doing as "working").

Although the Gordon Biersch had a decent-sized menu for an airport location, we were informed that the menu consisted only of their three types of hamburgers since there was only one cook working. None of the other sandwiches, just the burgers. I guess the cook on shift had only completed the "how to cook a frozen burger patty" portion of his certification. From there, I'm sure he'll move onto "how to microwave a bag of pulled pork" and "how to grill a chicken breast until you don't kill everyone." Baby steps, everyone.

At this Gordon Biersch, I ordered dinner and also ordered a cheeseburger and garlic fries to go. I then completed the second leg of the Supperjump, using the McChicken from Lihue. I also forgot the words for "Haupia Pie" and "saimin" again. Because I'm super dumb.

Honestly, even many hours old and smashed, the McChicken was still a McChicken. Take that as you will. Two legs down, just one trans-Pacific flight left. It was onto the redeye and back home.

That was some flight. I was in the very last row, so my seat didn't recline because the back of the chair was against the wall. I am anti-seat-recline anyway, because I'm 6'2 and generally going to be uncomfortable anyway and stupidly believe in the whole "everyone should try to be courteous all the time" thing. So I'm in this non-reclining seat -- in the middle -- and there's a baby sitting directly in front of me, but thankfully the baby goes to sleep pretty much immediately after takeoff.

About half an hour into the flight, however, the baby's mother reclines both her seat and the baby's seat and goes to sleep. So I spend the next four hours just sort of silently wishing I were dead. The best part? When I got up to use the bathroom about two hours later, I happen to glance at the mother and daughter. The baby is laying across her seat with her head in her mother's lap. She isn't using any portion of the seat back. Not a single millimeter of it. But I fumbled my way back into my seat without a word, because dammit, this is Supperjumpin'.

We eventually landed at LAX where I retrieved my to-go order, nestled snugly in the overhead bin and hopefully making everyone's luggage smell like old garlic fries for six hours. There was a wait for a shuttle, a drive back to the long-term parking lot, a period of time getting lost trying to find the 105 freeway entrance and a trip back toward the neighborhood way I live. LAX is a real long way from Los Angeles proper.

In the Los Feliz/Glendale area, a Del Taco location was spotted. It was at this location, at about 8 a.m. PT, that the third leg of the Supperjump from Kauai to Los Angeles was completed.

That last part was really, really bad. At last, however, my journey was complete. I hope I have done my part to contribute to the noble art of the Supperjump and believe I have set some manner of "bar." It is up to you, now, my fellow Supperjumpers. Go and do likewise.