Zero sum game: Week 3 of the preseason, full of sound and fury

All of it signifying nothing, which might be an improvement if you're Buffalo. Let's add up the meaninglessness of last week's preseason action.

Share All sharing options for: Zero sum game: Week 3 of the preseason, full of sound and fury

I've wondered this before, but what if one team just treated preseason games as unseriously as possible? Trying 80-yard field goals for no reason, blitzing 11 players on every down, letting Vince Wilfork take dozens of snaps as a quarterback. What would the league do? And can we find out the hard way?

+1: The passage of time. Any hope that the New England backups might make this a competitive game in the second half went out the door when Kellen Moore directed the opening third quarter drive 80 yards for a Detroit touchdown and Ryan Mallett followed that with a three-and-out. Fortunately, we got a quick death instead, with only six other drives in the game thanks to each team using over six minutes of clock on a single possession.

-1: New England Running Backs. 27 attempts, 57 yards, no touchdowns, and two fumbles lost. Clearly Danny Woodhead was the gritspiration that made this unit work.

+1: Alternative scoring methods. Carolina got four touchdowns from the defensive and special teams units in this game, the same number they got from those units in the entirety of the 2012 season. Despite collecting an interception and a forced fumble, Luke Kuechly scored none of these points, either because he is a selfless teammate or because he doesn't know how to win. Pick one of these sides and argue it furiously -- it's First Take, Home Edition!

-1: Sliding methodology. Concussions are serious business, and we hope Tyrod Taylor is OK, but let us all take this moment to remember that quarterbacks should take to the ground when the moment is right, especially in a preseason game.

+1: Brady Quinn is the most recent quarterback to throw a game-winning touchdown for the Seahawks, and that is a fact you cannot deny no matter how much it physically pains you.

-1: Eddie Lacy's numbers (8 rushing attempts for negative-5 yards) are a little unfair because they include a Graham Harrell fumble he recovered and tried to advance and his first run, an 11 yard gain, was wiped out by a holding call. Still, this is what Lacy did on all his other touches: 3 yard run, 2 yard run, 1 yard run, run for no gain, run for no gain, -3 yard run, -2 yard run, -6 yard lateral. Yeeeesh. 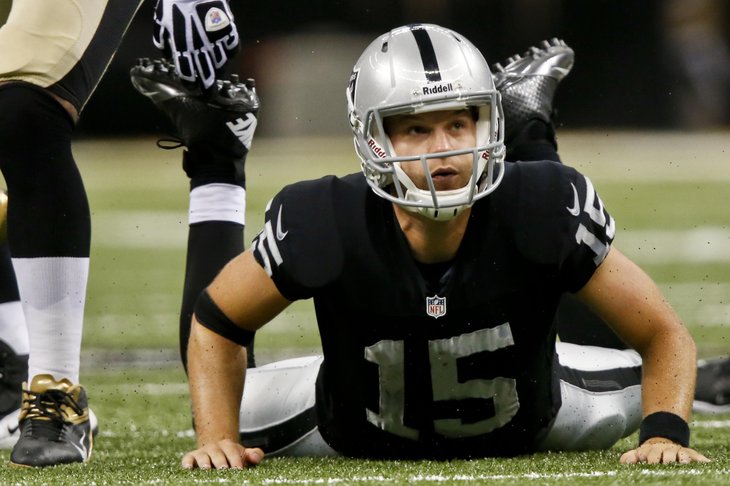 The preseason isn't over yet, but a few teams are already spiraling into free fall.

+1: Alshon Jeffery. 7 catches for 77 yards, targeted on every drive he was in for with the exception of one (when Matt Forte took the first play of that one 32 yards for a score) -- these are good signs for the player the Bears are hoping can be the possession option to free up Brandon Marshall.

-1: The kidnappers who took the real Matt Flynn. Because, holy hell, there's no way that was an actual football player out there. A crude golem made out of candy corn and NFL Quarterback Challenge hats, maybe. But not a football player.

-1: Buffalo on 3rd Down. Of course, the flip-side of having eight punts is that you probably did things like only go 2-of-13 on third down, and one of those conversions was the run on which Kevin Kolb suffered what might be a career-ending concussion. The real struggle was in the second half, when the Bills went 0-for-6. Solution: Start punting on 2nd down, and then jerks like me who check the box score will just think, "Wow, Buffalo did a great job of staying out of third and long!"

+1: Forget the red zone -- the Colt defense was so good that the Browns didn't cross the Indianapolis 40 until the third quarter or the Indianapolis 30 until the fourth. Let's use that as an excuse to fire up the hot seat in Cleveland -- huh, weird. It actually doesn't have an off switch.

-1: The Browns weren't likely coming back down 14 with four minutes left, but they did manage to recover an onside kick to at least leave the possibility open. At least until Brian Hoyer did this on his first play in the game.

+1: Rex Ryan. Everyone's calling his postgame conference a "meltdown," but here are all the things he DIDN'T do during it:

That's a successful media appearance, from where I'm sitting.
-1: Everyone's busy talking about Geno Smith's three interceptions and, well, this:

But what about Eli Manning 8-for-20? What about the fact that he went 0-for-5 passing on third down? Doesn't that count for anything, New York media??

+1: Modern television sets, because they make it waaaaay easier to change the channel from terrible games like this. I can't believe you used to have to get up and TOUCH the TV like some sort of frustrated chimp.

-1: Everything related to Tampa passing the ball, because 9-of-25 for 103 yards, no completion going for more than 19 yards, AND six sacks allowed is just the absolute worst. It's a trifecta of worst-ness.

+1: Role reversal, as Kansas City rolled up 116 yards on the ground but only got 33 of those from running backs. Could this mean a backfield featuring Alex Smith handing the ball off to Chase Daniel? Too early to say, but you should probably draft Chase Daniel no later than round four just to be safe.

-1: Overtime, which is a stupid concept for a preseason game. At least settle a tie in some sort of interesting and weird way, like having each kicker line up at the 30 and whoever can nail one of the uprights first wins the game for their team.

+1: Denard Robinson had a fine night with 33 yards on seven carries and continues to be an interesting option for Jacksonville. More importantly, he now has 110 yards from scrimmage in the preseason, and Tim Tebow only has 94. That should effectively kill the JAGS SHOULD SIGN TEB(gets trampled by JAGS SHOULD SIGN TEBOW fans)

-1: Jacksonville tight end Ryan Otten's parents. Seriously, did you not realize that "R. Otten" would be showing up in box scores if your child ever decided to play sports?

+1: If I offered you a starting quarterback who went 13-of-18, averaged 7.6 yards per attempt, and threw two touchdowns to no interceptions in this preseason game, your brain would probably accept. If I instead offered you Tony Romo, without listing any statistics, your gut would say no. Both your brain and your gut are right, because this is human imperfection at its most pure.

-1: "The Law Firm" is a fitting name for BenJarvus Green-Ellis, because you spend lots of money on him and at best you get a result that is effective if boring. At worst, you get five carries for five yards, which is the "we settled out of court because then we can pretend we weren't going to lose" of stat lines.

+1: Alec Ogletree, who finished with six tackles (two for a loss), two passes knocked down, an interception, and a very forcible fumble returned for a touchdown. It's fun to watch someone mess things up for Peyton Manning.

-1: Knowshon Moreno, not because he finished with 75 yards on eight touches, as that's certainly a good thing. No, we're only putting him here because we are tired of never, ever, ever knowing what to believe about the Denver backfield. Life has so little consistency as it is, you jerks.

+1: Jake Locker completing 84 percent of his passes is a decidedly welcome sight for Titans fans, especially when you consider a) he never hit that number last year, b) he never hit 74 percent, either, and c) he only hit 64 percent twice.

-1: Five sacks on 24 Matt Ryan dropbacks works out to, no, that's not how pass protection is supposed to work at all. Three of those came on third down, which is also not how pass protection is supposed to work. The good news is this doesn't seem to bother Matt Ryan. His sack rate hit a career high last season and the season before that, but most of his numbers haven't suffered. (The one that has, if only slightly? His interception percentage, which went from 1.6 percent in 2010 to 2.1 percent in 2011 and 2.3 percent in 2012.)

+1: Carson Palmer. It's amazing how good "not horrifyingly inept" quarterback play looks in Arizona, but this is the advantage of setting the bar low.

-1: Arizona's special teams unit allowed a punt block, gave up a 44-yard punt return, and had a field goal blocked. In the first half. In the second, one kick return was fumbled (though recovered by Arizona) and the next had a holding call on the Cardinals. Field Position -- it's for suckers!

+1: Occasionally, I forget that Andre Johnson is the kind of freak who can do things like catch seven balls for 131 yards in just a half of work. And that's my fault, not his. You hear me, Andre Johnson? IT'S MY FAULT.

-1: Remember how we were all thinking maybe the New Orleans defense was going to be more impressive this year? And then they gave up 278 yards in the first half to the Texans? For an average of over six yards per play? Oh, the naiveté of youth, where we believe beating up on the Raiders and Chiefs means something.

+1: Jewel Hampton, the second person in NFL history to score a touchdown and be named after a 1990s singer-songwriter. (The other was quarterback Joan Osborne-Flaherty, a backup for the 1986 Lions.)

-1: Lavelle Hawkins touched the ball twice in this game. The first was a kickoff return taken back 105 yards for a touchdown. Hawkins was then flagged for unsportsmanlike conduct AND taunting. The second was a 22-yard catch on 3rd-and-12. Hawkins was flagged for unsportsmanlike conduct again. This means playing Monopoly with Lavelle Hawkins is probably misery.