13 points, 33 seconds: The night Tracy McGrady was a basketball god

Let's remember that he's responsible for perhaps the greatest half-minute comeback of all time.

Share All sharing options for: 13 points, 33 seconds: The night Tracy McGrady was a basketball god

NBA comebacks are inherently difficult to research, but as far as I can gather, the greatest fourth-quarter comeback belongs to the 1977-78 Bucks. Down by 29 points in the fourth, Milwaukee roared back to steal a 117-115 win over the Hawks.

On Dec. 9, 2004, the Rockets needed 13 points to top the Spurs, 81-80. That they did so within the final 33 seconds is perhaps unprecedented in an NBA game. That they all came from one man, Tracy McGrady, is one of the great NBA miracles of the 21st century.

McGrady scored 13 points in a 33-second span thanks to four buckets from beyond the arc, a made free throw to complete a four-point play. and a steal. That is a fairy tale, and if you didn't see it for yourself, you'd be forgiven for assuming that he shot some kind of 13-pointer from 400 feet out, clearing a village of war and destruction and layabout peasants.

Seven seconds into the shot clock, McGrady finds a small amount of separation from his defender, sets, and fires. That's his spot, as his next two shots will be taken from almost the same exact place on the court. The Spurs' Malik Rose is surely pretty foul-conscious in this particular game situation, but he still contests the shot well.

This one's a little weird-looking. Yao Ming sets a pick a full two feet outside the arc. This allows McGrady to evade Bruce Bowen -- perhaps one of the best perimeter defenders of all time -- and shoot over Tim Duncan, a very tall and extraordinary basketball player who nonetheless is completely out of his element here. McGrady was able to make sure he drew the foul from Duncan while putting up a quality shot.

McGrady, as heroes do, sunk his free throw to complete the four-point play. Seven points down, 24.3 seconds left.

A lot of comeback stories rely on a collapse from the other team -- in particular, one in which they can't hit their free throws. What makes this all the more remarkable is that the Spurs went 4-for-4 from the line within these final 33 seconds. McGrady was chasing a moving target on the scoreboard, and he was doing so through a sea of bodies.

After lunging to bring down the inbound pass, he moves upcourt, and this time he can't escape Bowen. He can't create any space. No matter. For the third straight time, he finds that spot on the floor right next to the TOYOTA CENTER lettering, rises, and knocks down a three.

Just as we can't say the Spurs collapsed through their free throw shooting, we also can't water down this fable by pointing to a subpar defense. San Antonio allowed the fewest 3-pointers in the NBA that season. Bowen -- who, again, was better at perimeter D than just about anybody -- played perfectly good defense on this play. McGrady just couldn't possibly miss, is all.

With about 11 seconds left, and leading 80-78, the Spurs' Brent Barry struggled to inbound the ball before finally finding Devin Brown. In a likely effort to run off more clock before drawing the foul, Brown tries to peel away from his defender, slips, and loses the ball ... to Tracy McGrady, who stomps upcourt.

Finally, T-Mac picks a new spot on the floor. He halts his sprint, shoots over Barry with 1.7 seconds remaining, puts his Rockets up by a point, and becomes legend.

Tracy McGrady was a fairly prolific 3-point shooter, but his effectiveness from beyond the arc staggered during the '04-'05 season. He put up 435 attempts, which is probably too many for a guy shooting .327. In fact, during that season, he was one of only seven players in the NBA's 3-point era to shoot so poorly on so many attempts. It hasn't been done since. 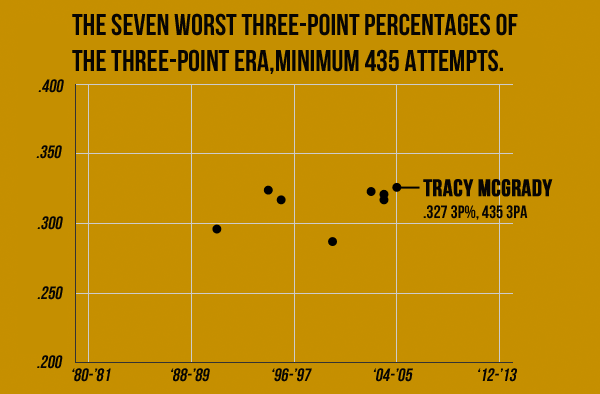 Mathematically speaking, and based on that rate of success, the chances of McGrady hitting four straight three-balls were about 1.1 percent. Even that, though, doesn't properly illustrate how great of a long-shot this was.

You know about Bowen and the Spurs' league-best 3-point defense, and you saw that each of McGrady's buckets were well-contested. Consider also that McGrady was a superstar who deserved -- and received -- all the Spurs' attention. It wasn't possible for him to divert attention elsewhere. The Rockets didn't really have the luxury of setting plays for him, either. Aside from Yao's pick on the second shot, McGrady had to do it all himself.

So where are we gonna ballpark these odds? I'm not sure. Worse than one in a hundred, that's for damn sure.

1. During those 33 seconds, McGrady averaged 0.39 points per second. If it were possible for him to keep up that pace over 48 minutes of regulation, he would have scored 1,134 points that night.

2. Kareem Abdul-Jabbar is the NBA all-time points leader (38,387). At this pace, McGrady would have scored more than that in about a month and a half.

3. Earlier this year I wrote about The Worst Game Ever, in which Northern Illinois scored only four points in the entire first half. So during this sequence in 2004, McGrady -- all by himself -- scored 117 times faster than that Huskies team, and against the best defense on Earth.

Tracy McGrady, one of only seven men to finish an entire NBA season with an efficiency rating of at least 30, is the only one of those seven without a championship. He never even advanced past the first round until last season, when the Spurs picked him up for insurance. Throughout their playoff run, he played about a half-hour and went 0-for-7.

And that's where it ends, even though he's only 34. He announced his retirement Monday, and his popular legacy will be that of the supreme talent who could never win a title. I don't really care whether that's fair or not. The honor of leading one's team to an NBA championship belongs to dozens of guys. If they hadn't accomplished it, it would have been accomplished by someone else.

Those 33 seconds, though. If McGrady hadn't done it, it never would have happened. The moment would not exist.