Tracy McGrady, Allen Iverson and the faults in our stars

T-Mac and The Answer retired from basketball within a week of each other. How each was portrayed was at times unfair, and largely unexplained.

Share All sharing options for: Tracy McGrady, Allen Iverson and the faults in our stars

Because we all love Tracy McGrady again, everyone chalks up the disappointment of how his career finished to injury. His knee and back cut short the prime of his career, so much so that he was washed up by age 31.

But don't forget that there was once a time when T-Mac was healthy and thriving ... and the world was still filled with doubters.

Allen Iverson, who officially retired last week, faced questions at his peak, too. A.I.'s were different than T-Mac's, of course. No one ever doubted that Iverson cared deeply and left everything on the court. It was all about his willingness, or lack thereof, at being a member of a team and taking instruction from a coach. The questions about McGrady centered around whether he cared about winning, whether he cared about the game. 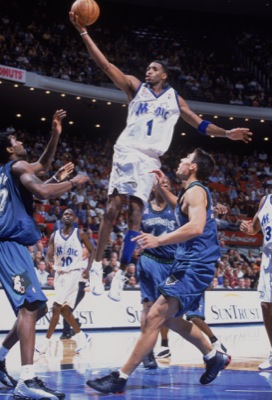 We look back at some of McGrady's best highlights.

They were always unfair, and there was a good bit of paternalism involved. Orlando Sentinel columnist Mike Bianchi, for example, called McGrady "Me-Mac" for not properly applying himself during a 19-game losing streak in 2003-04. Magic GM John Weisbrod questioned McGrady's credentials, trading him to Houston shortly thereafter. And so, it became a recurring theme during T-Mac's Houston tenure, with the notable playoff failures added in. You can't win with a guy like McGrady.

It's ridiculous and unfair. Those sleepy eyes always betrayed how hard McGrady worked on the court. (In an incredibly ironic twist, sleep therapy once helped T-Mac get through a bout with his back.) For a spell, McGrady was the NBA's best perimeter player. For an extended stretch -- somewhere between five and eight years -- he was behind only Kobe Bryant and occasionally Dwyane Wade or LeBron James. McGrady had some of the most bombastic scoring performances in history and won a whole lot of games in Houston. Those Rockets weren't very well balanced outside of T-Mac and Yao Ming, and McGrady took the heat. (This is to say nothing of Jeff Van Gundy's insistence toward a slow style that negated some of McGrady's natural gifts.)

No one ever questioned Iverson's will; it was more his intent or motive. He got the selfish knock not because he didn't work hard enough on the court, but because he wouldn't share the ball an amount deemed appropriate for a 6-foot guard. (There was also the "practice" saga, which also piles on the "lack of concern about the team" narrative.)

So, why did Iverson and McGrady have knocks on them? Their individual lack of orthodoxy forced those most concerned with The Only True Way of Being to find faults in them.

The size question is something that matters. Iverson was abnormally short for a two-guard. You'd frequently hear commentators call him the NBA's toughest player "pound for pound," as if his diminutive size meant his performance was worth extra credit. McGrady was huge for a two-guard, but still had speed and quickness. Did the world expect more from McGrady simply because he was bigger than his rivals? (If so, Yao had to have been sympathetic to that problem.)

Finally, while McGrady wasn't the first or most notable preps-to-pros star, he was one of the most notable who burst onto the prospect scene late in his high school/AAU career. And he famously struggled in Toronto on his rookie deal, unlike other preps-to-pros stars like Kobe and Kevin Garnett. If Iverson was considered a torch that could explode into flames at any moment, McGrady -- perhaps because of his size and power -- was seen as the torch who would explode into flames only on his own terms.

The sound and fury of A.I.'s prime 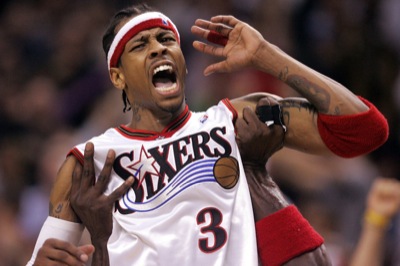 No matter his faults, Allen Iverson made you want to watch.

For all that, both were questioned. And as soon as a crack showed -- Iverson's practice comments, T-Mac's bad losing streak and playoff dismissals -- those questions became critiques. No star avoids the critiques; even Kobe is questioned. But with guys like Kobe, it's always been couched in genuflection: "Kobe is incredible, but ..." With our weird protagonists, that hasn't always been the case. Just look at Weisbrod's comment on T-Mac again:

The NBA is quite possibly more full of oddball stars than ever -- LeBron really destroyed orthodoxy, and Kevin Durant, Russell Westbrook and soon enough Andrew Wiggins are helping the cause. The challenge is in ensuring our collective acceptance of players for who they are and not who we expect them to be sticks.

It's a shame more people couldn't fully appreciate T-Mac five, six, seven years ago like they do now that he's gone.

• Ziller: Who has the toughest coaching job?

• A look back at Tracy McGrady’s greatest moments

• Looking for Boston's next "Big Three"