The best bullpen in the world, two years running

Share All sharing options for: The best bullpen in the world, two years running

On Tuesday, Fernando Rodney blew a save, costing the Rays a pretty crucial win. He's done that a few times this year. Last year, though, he was immaculate. This year, Rodney allowed as many earned runs between May 16 and May 22 as he allowed in 2012.

Jim Johnson hasn't been quite as automatic for the Orioles this year, even though he's striking out more people than ever. The Orioles were one of the big surprises in 2012 because of their magic bullpen. The pitchers are mostly the same this year, and it's not like they're bad. It's a good enough bullpen. But it's not magical this year. They're a fickle thing, these bullpens.

I wanted to take a look at how the bullpens were doing this season compared to last season, but evaluating bullpens is kind of a tricky thing, too. A bullpen's collective ERA isn't very illuminating, and stats like holds and saves are useless. So I looked at a combination of different stats:

FIP
Fielding-independent pitching. The strikes, walks, home runs, and innings. What the pitcher is supposed to control, in other words.

WPA
Win probability added. The difference in expected winning percentage before and after a plate appearance.

Clutch
Similar to WPA, but with some additional context.

Add them up and you get ... something better than ERA, at least. Here's how teams ranked in 2012.

Okay, so that was about how you remember it. A bunch of playoff teams at the top, and a bunch of hilarious teams at the bottom. Most of them kept the same personnel, for the most part, so let's take a look at 2013 so far:

Everything right is wrong again. Up is down, left is right. The good bullpens are bad, the bad bullpens are good. The Orioles ... what in the heck happened with the Orioles?

A visual representation of bullpen-related nonsense, using the above rankings: 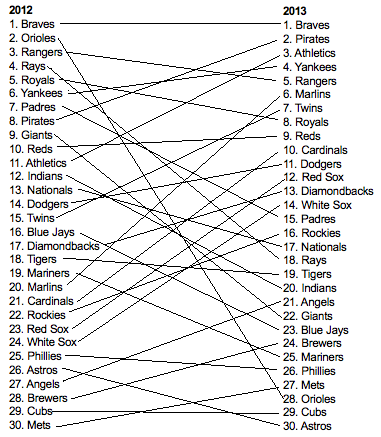 Nonsense. Where are the neat, easily defined patterns? Those lines were zipping past each other in the offseason, and no one had any idea. The Orioles are probably a better team this season, but because they don't have the bullpen they did, they're struggling to remain relevant in the playoff chase.

But right there, at the top. There's a beacon of stability. And no one is talking about it nearly enough. For the second year in a row, the Braves are absolute murder when their starters leave the game.

I'm going to play a game. Maybe it's easy for you, but don't spoil it for the American League fans. I'm going to list three names. Two of them are Braves relievers who are doing quite well, and one of them is made up.

Give up? Well, nuts to you. I'm not telling. But one of those is made up, and the other two are real, much to your surprise. The Braves are relying on the second-stringers in the bullpen, and it's working.

Also, Craig Kimbrel is still amazing. Let's bring him up before we get too nutty. Instant Good Bullpen, just add Kimbrel.

It's not like the Braves have been without adversity, either. Eric O'Flaherty and Jonny Venters are both lost to Tommy John surgery -- a crushing blow for almost any other team. The Braves keep rolling, though. Ryan Holder has been an absolute beast. Luis Avilan has deftly replaced the left-handers in the setup role.

Bullpens are weird, bullpens are jerks, and bullpens are untrustworthy hooligans. You can't tell what's real and what's a mirage until it's much too late.

But real or not, the Braves are having another excellent bullpen season. It still might be a fluke. The odds are that it probably is a fluke. No one has a bullpen this good in consecutive seasons -- with turnover, mind you.

The Braves do. Where the Rays, Orioles, Giants, and Nationals have faltered, the Braves have kept on keeping on. Kimbrel (and his ridiculous strikeout rate) are probably buoying the rankings a bit, and the strong starting pitching means less garbage time for the garbage-time pitcher, so everyone is put in a good spot.

If there was something about the Braves and their success that you couldn't put your finger on, it's probably the bullpen. It's a mighty fine bullpen. It really is the common denominator. Maybe this is a step toward appreciating how much that's worth.