Everything you need to know about the Unicycle Football League

While you wait for regular football, the Unicycle Football season is already going strong.

Share All sharing options for: Everything you need to know about the Unicycle Football League

Most football fans regard the summertime as a long, desolate period devoid of the sport they love. They're counting down the days -- hours, at this point -- until football returns. Well, I'm here to tell you that football has been going on this whole time and also the sport you call "football" is silly, plodding nonsense.

"Pedestrian football is outdated," reads the tagline of the official Unicycle Football League website, which has been in-season for weeks already. What these folks prefer, as is depicted in the above highlight reel of a recent Unicychos vs. Los Bierdos match-up, is to strap on bike helmets and flags, saddle up their unicycles, and play football on wheels (one wheel per person, that is). They've been doing just that in San Marcos, Texas, since 2005. Here are some things you might like to know about Unicycle Football, from the above video and the rulebook:

- The rules -- scoring- and position-wise -- seem as similar as possible to regular football. There are minor variations, like how field size varies depending on the number of players (between 4 and 11 per side) and how initial possession is determined by a unicycle "joust." Suddenly, coin-flips seem really lame.

- You can "tackle" by pulling an opponent's flag, or by knocking the opponent off his unicycle with "the least amount of force required to cause the ball handler to dismount their unicycle."

- Even professional unicyclist football players fall off their unicycles a lot:

- And on that note, leaping off unicycles is a pretty universal strategy. Kicking requires a mid-swing dismount: 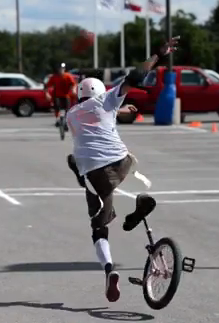 ... and players regularly launch off their unicycles to reach high passes: 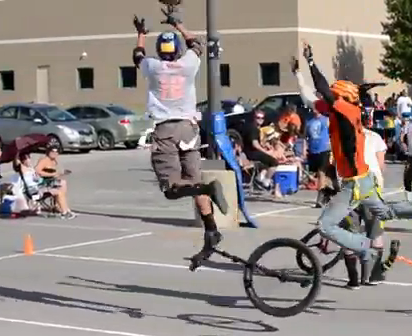 It's hard to tell whether they're propelling themselves off the pedals or if they just have exceptionally strong perineums.

- The goalposts are held up by two women, and the crossbar is some string.

- Teams include the "Rolling Blackouts" and "Hell on Wheel."

- They're not very strict about jersey numbers. You want three or four digits, or maybe a "#"? Go for it.

If you'd like to see some Unicycle Football, but don't live in Texas, you might catch a game at the New York City Unicycle Festival this coming weekend. Catch some unicycle basketball and unicycle hockey while you're at it.